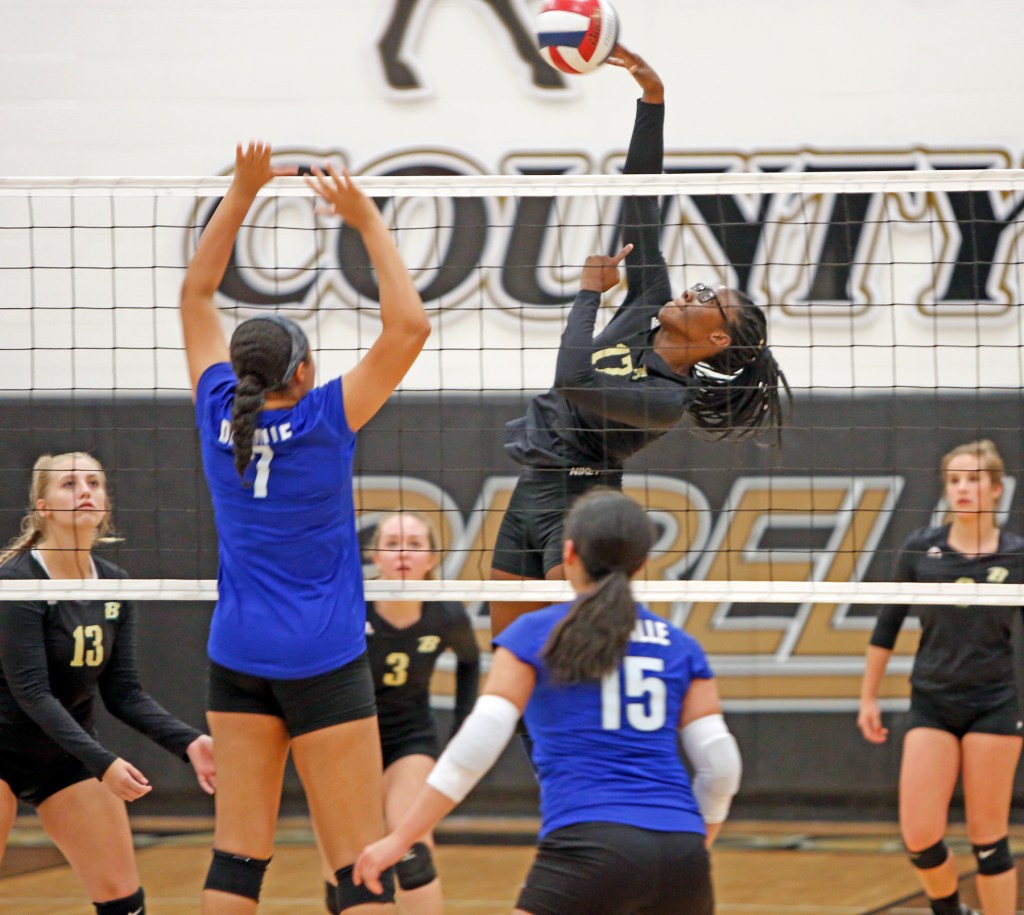 One coach was thrilled with the way her team played Monday night. The other coach, not so much.

It was the second coach, however, whose team came away with the victory Monday night in the second meeting of the season between the Boyle County and Danville volleyball teams.

Boyle rallied after dropping the first set and narrowly escaped having to play a fifth set before prevailing 3-1 before a spirited crowd at Rebel Arena.

It was the Rebels’ 11th consecutive victory in the crosstown series and their second win over the Admirals this season. The others came easily – all were in straight sets, including a 3-0 victory on Aug. 28 – but this one did not, and Boyle coach Andrea Craig said that was due in part to the fact that her team didn’t play well.

“I don’t think they reached their potential at all,” Craig said. “I think they were playing lazy ball, and I think we’ve got to hit the gym tomorrow and figure out what’s going on so that we can actually play like I know we can.”

Ellen Casey, who is serving as acting head coach for Danville while coach Maggie Myers is away from the team, would have felt better about the match if the Admirals had won – but probably only a little bit.

“I can’t be more proud of them, honestly. I can’t wait to call coach Myers and tell her about it,” Casey said.

“The student section helped us out a lot. We’ve never had a student section that big before,” Boyle senior Sierra Dean said. “It makes you feel good that people want to come watch us and support us, so that lifted us up a lot.”

“That’s the one thing we’ve talked about and tried to work on all year: Keeping that energy once we get it,” Casey said. “Once we get have a slight momentum change, because we’re such a young team, it’s really hard for us to get it back up to the level we need it.”

Dean said she feared then that the match was headed for a fifth set.

“I was nervous, because we just started playing frantic, we weren’t placing the ball where it needed to be. We started breaking apart again, but I’m glad we pulled it out,” she said.

Boyle trailed 20-15 in the fourth set before scoring five straight points to tie, then going up 24-21. Danville fought back with three straight points, tying the set at 24-all on a block by Bri Johnson.

The Rebels got the next two points, however, winning the set 26-24 and closing out the match on a kill by Kennedy Kirkland.

“They finished it off, so I’m grateful for that, and I think they had to dig deep to finish it off, but they should have never been in that situation in that fourth set to begin with,” Craig said. “But I’ve got to give Danville props: They wanted that set bad tonight.

“My girls didn’t come ready to play. They thought it was going to be easy, and I knew when we played Danville a few weeks ago that it wasn’t going to be easy. I told them, ‘You’ve got to be ready for them at the end of the season. The longer they play, the more they play together, they’re going to get better,’ and that was definitely evident on their side of the net tonight.”

Casey said Danville had fewer hitting errors Monday than in any match this season. The Admirals had only 14 hitting errors and 28 kills, including eight by Delaney Dennis.

“I really could not find anything to tell them that they were doing wrong in the points we were losing. The points we lost, Boyle earned or they were just missed serves,” she said. “Even the official stopped us and said, ‘They have every reason to be proud, because they played their game.’ I think (this match) will definitely boost their confidence.”