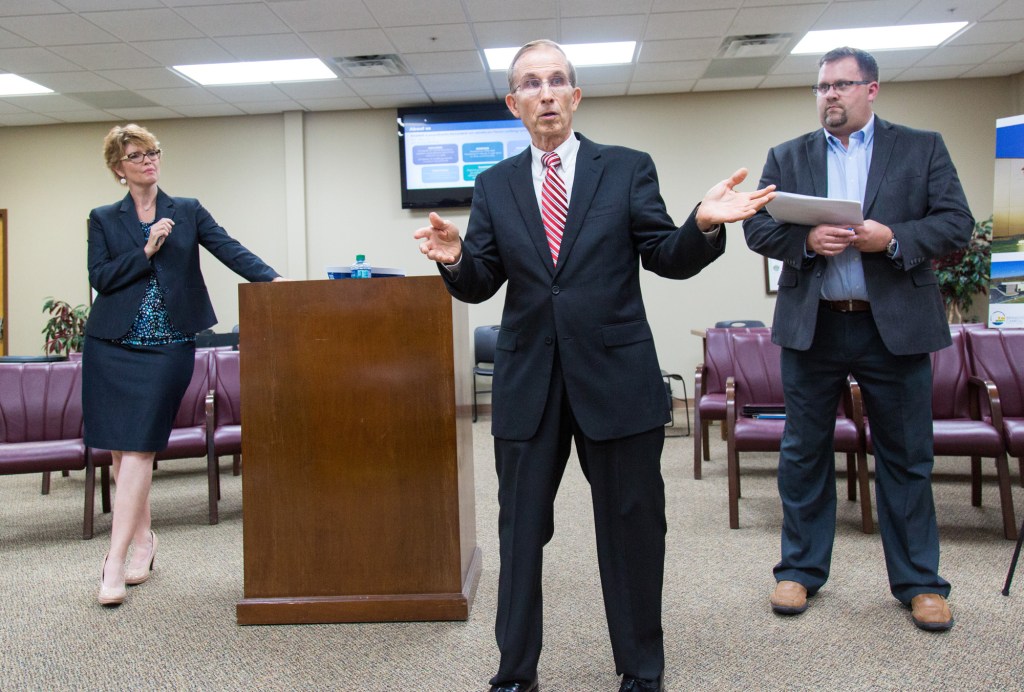 Ben Kleppinger/ben.kleppinger@amnews.com
From left, Monica Sumner, Allen Beck and Eric Chambers with Brandstetter Carroll present to the Boyle Mercer Joint Jail Committee in August 2017. Brandstetter Carroll was selected to conduct a comprehensive study of the Boyle County Detention Center in October 2017; the bulk of that study is expected to be released in draft form on Friday, Sept. 21, 2018.

It’s been more than a year since the Boyle-Mercer Joint Jail Committee began looking for expert advice on what to do about rising costs and substantial crowding at the Boyle County Detention Center. Now, answers are arriving.

The Joint Jail Committee, as many officials from Boyle and Mercer counties as can make it and any members of the public who choose to attend will see the results during a special workshop meeting at 1:30 p.m. Friday in the community room at Inter-County Energy on Hustonville Road in Danville.

“It looks like we’re going to get exactly what we wanted, what we asked for,” Boyle County Deputy Judge-Executive and Treasurer Mary Conley said Friday.

The presentation will include all draft chapters of a report from Justice Concepts Inc. except for an executive summary yet to be completed; and “four salient findings” from RJS Justice Services, according to Chambers’ email. Those findings are:

• “The local population is likely to grow beyond jail capacity in coming years;” and

• “The facility nor the operations allow for constitutional provision of prisoner care and custody.”

The need to renovate, expand or replace the existing jail “will be required in the near future,” Chambers email states.

The cost to operate the Boyle County Detention Center has been rising for years, as has the number of inmates detained in the facility. The jail’s budget for this fiscal year is more than $5 million, with Mercer County contributing more than $1 million and Boyle County almost $2 million from their respective general funds.

In order to stop the fastest-growing expense in their counties’ budgets, the Joint Jail Committee began looking for consultants who could offer alternatives in 2017. In October, Brandstetter Carroll was selected to conduct a comprehensive jail study for $75,000.

When Brandstetter Carroll pitched its services to the committee in August 2017, lead presenter Monica Sumner said the company’s goal would be to provide answers Boyle and Mercer could not get on their own.

“The whole community, these two counties, everyone involved in this jail — you are a canoe in the ocean, you are lost at sea,” Sumner said at the time. “Everywhere you look, there’s a swell of water coming up. The faster you row, you still cannot see land … what we’re offering today is that we know how to get you to the beach — together.”

The committee selected Brandstetter Carroll in part because it felt the consultants weren’t focused solely on building a bigger jail, but on finding solutions the community could implement to control inmate populations and reduce recidivism.

During the August 2017 presentation, Chambers held up one detention facility project the company worked on in Okaloosa, Florida, as an example of what the company can do. That facility is rated to hold 594 inmates, but was peaking at close to 900, Chambers said. Brandstetter Carroll’s study resulted in operational changes but no new construction; it resulted in the population dropping to near the rated capacity shortly after the study was completed, and down to below 500 three years after that, he said.

Chambers said the solution for Boyle and Mercer counties should not be “just build a bigger jail.”

“Then we’ve addressed a need, but we haven’t addressed the problem,” he said at the time.

The Boyle County Detention Center is rated to hold up to 220 inmates. It peaked above 400 inmates multiple times in 2017, but 2018 has been a better year, with multiple monthly averages in the upper 200s. Jailer Barry Harmon said last month the population bottomed out at 229 once in July.

Officials have been happy to see the lower numbers; they’ve also said the change delayed Brandstetter Carroll’s results somewhat as projections had to be adjusted.

Boyle County Attorney Lynne Dean has credited numerous changes already being made with helping lower the jail’s population. A “Rocket Docket” program, which fast-tracks cases so people get sentenced and taken off the county’s dime quicker, has been helpful over time, she said in August. As has the Shepherd’s House treatment program, which allows some inmates to leave jail while they work on job training, drug counseling and more.

But law enforcement officers have also told Dean they believe it’s “just a calmer year” and arrests could go back up at any time, she said in August.

“I go back and forth. Sometimes I feel like, ‘this is good; it’s going to get lower.’ And sometimes I think that we could build a huge jail with however many beds and it would just fill up,” Dean said at the time. “It just ebbs and flows. I don’t know what the answer is.”

The Boyle County Fiscal Court has planned ahead in anticipation of the report being released Friday by budgeting for up to $7.5 million in new bonds to be issued this fiscal year.

The actual amount needed for any of the recommendations isn’t known, but Boyle County officials said in May they wanted to be transparent about the fact that the county will probably be borrowing money.

“The important thing is to let people see this — the public needs to see this,” Judge-Executive Harold McKinney said at the time. “And I want to make sure we all understand — this is no commitment … but it puts the public on notice, it puts this fiscal court on notice, it gives us something to work from.”

The Boyle-Mercer Joint Jail Committee plans to hold a special called workshop meeting at 1:30 p.m. Friday, Sept. 21, to hear a presentation of a comprehensive jail study coordinated by consulting company Brandstetter Carroll. The meeting will be in the community room at Inter-County Energy, 1009 Hustonville Road, Danville.