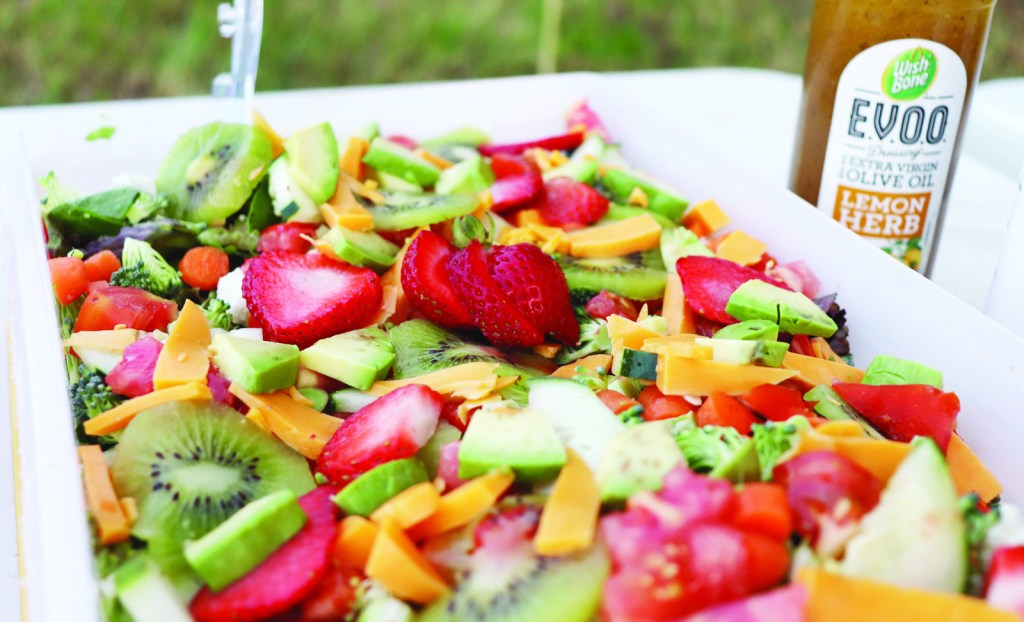 Photo contributed Autumn Salad is a refreshing treat, this is a photo of the actual salad served at a birthday party for Gloria Yoder’s mom.

It’s early Wednesday morning. The house is peacefully quiet, so I’m seizing the opportunity to get in touch with you all.

Last night we had an enjoyable, cozy birthday party around a campfire. This time it was for my mom.

My younger brother, Micah and his wife, Rose, and their three little children were hosting my parents and siblings beside the pond they dug several years ago. The setting was quiet and beautiful, it was out back far enough where you couldn’t see anyone or anything besides those of us at camp.

Arriving with the tractor and trailer, which we had used to transport a load of camp chairs, a mower, and our little tribe, we found Micah building a fire. Soon he and Daniel were grilling hot dogs and burgers, including some beef burgers. The beef burgers were made especially for Mom since she is quite fond of beef and seldom has the chance of having it as we use mostly venison and pork. Besides the delicious sandwiches, Rose had prepared a most unique gourmet salad layered with all sorts of veggies and even some fruits. Perhaps the most unique item on the table that really displayed Rose’s creativity was a half watermelon, decoratively cut to make the sides look like waves of water. In the center, she had all kinds of bite-sized chunks of fresh fruit with “dolphins” (bananas) splashing “out of the water” (fruit). The dolphins each had a “ball” (grape) in their mouth. It really looked just about too cute to eat. Julia and Austin were totally impressed with it and were especially intrigued when it was time to eat the “dolphins” and other fruit.

Sister-in-law, Regina had prepared one of our summertime favorites, pepper poppers. This time she used mild peppers, sliced them in half and stuffed them with cream cheese and bacon bits. They were then placed in a pan and heated on top of the fire.

After supper, we huddled closer to the crackling fire as the cool air began settling in. Soon we were rehashing memories of when us children were still young. There were some details that I didn’t remember until my brothers filled them in for me.

Julia and Austin were fascinated by the story of one day when Mom and Dad were gone for the day, and the boys were told to pick strawberries while they were gone. After picking a while, they began throwing some partially rotten berries at others in the patch. According to their report, they weren’t too worried about it until Uncle Paul wisely filled Dad in on the details.

Another happening I had forgotten entirely was how Micah used to be excellent at baking and especially enjoyed making our family favorite, chocolate cake. One day after whisking one together he went outside to play while the cake was baking and forgot to check it as planned. As it occurred to him that he isn’t watching it, he dashed into the house calling, “Kuha, kuha! (the Pennsylvania Dutch word for cake!)

I understood him to be saying, “Cougar, cougar!”  as he sped to the house. It was over the time when some folks had reported that they had seen cougars in our area. I didn’t know if I should run for my life or where this cougar was actually coming from. By the time I was reassured that it was only his “kuha” that he was concerned about, my legs felt weak and shaky. He had no idea what a scare he was giving us until his cake was safely out of the oven.  And no, I don’t even remember where Mom was that day.

I enjoyed remembering the horses we had “back in the day.” I remember standing next to Red and Blonde, our workhorses. To my six-year-old brain these were the most prominent horses I had ever seen, and of course I was quite proud of them, after all, they were Daddy’s big horses that worked in the fields for him.

As we traded memories, Owen began roasting marshmallows for s’mores. Rose spread peanut butter on graham crackers and topped them with chocolate candy and roasted marshmallows.

In the meanwhile, I put Elijah to sleep, crunched down an ooey gooey s’more, and shared some bits of my early childhood memories. It’s like I recently told one of my sisters, my most special memories as a girl are probably the time that my dad and I spent time together working on some sort of project such as the octagon picture frame he made for me. Now the question rings in my mind, “What are we doing to make our little ones feel safe, loved, and secure? Am I too busy doing what’s so important that I forget what really counts in life? What do our children really need the most?”

Okay, now for a good recipe for you to try at your next picnic, or at home in your dining room.

Layer the chopped and sliced fruits and veggies in a 9 by 13 container, in the order given. Serve with your favorite dressing.

DBCHS Pets of the week, September 19