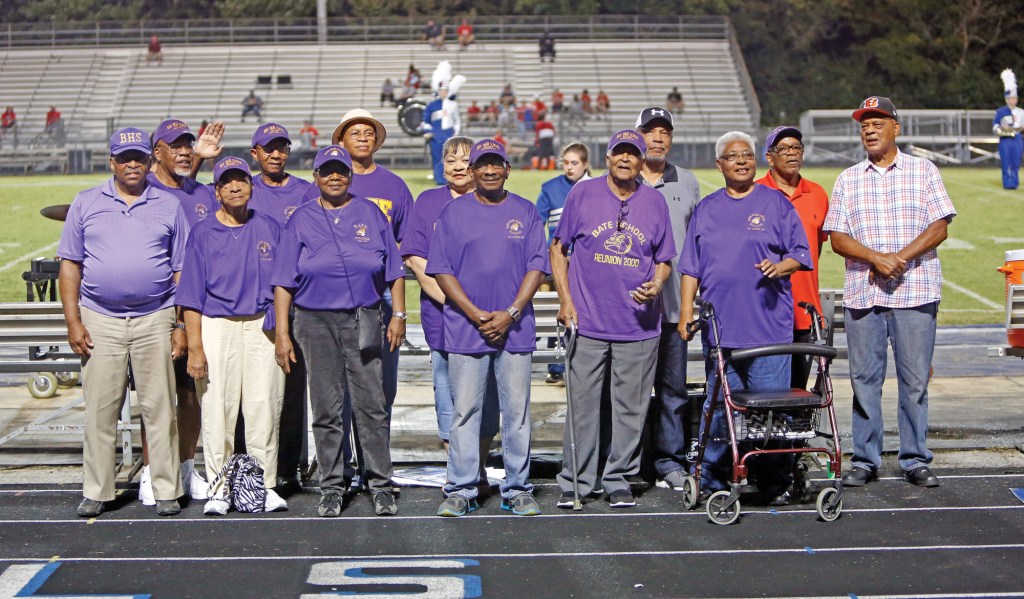 For a Danville football game, there was surprisingly little blue to be found.

The home team was wearing purple and gold, and so were many of its fans. To Glenn Ball and his fellow Bate High School alumni, it was a beautiful sight.

For the second consecutive year, Danville honored the legacy of John W. Bate and the former high school that bore his name by wearing Bate replica jerseys for their game Friday against Waggener and recognizing alumni of the school at halftime.

“It’s a good history lesson,” said Ball, a member of the Bate class of 1960. “It’s nice to see they recognize us. The school was in existence for a long time, so it means a whole lot, it really does.”

Danville coach Clay Clevenger initiated the commemoration of the school and its founder last year and said he plans to do it every year, saying it’s important for his players and the student body at large to understand their historical significance.

“There’s a lot of pride in Danville, and the Bate alumni and the Bate segment (of the community) is a very prideful group,” Clevenger said. “It’s a great story, and I want that legacy to continue and for as many kids as possible to understand the legacy of John W. Bate. There’s no better way than to do a tribute game once a year and to make sure that that’s the focal point, the history lesson and what he meant to this community, and to make sure that kids for years to come understand the significance of what he was able to accomplish.”

It wasn’t until the night before last year’s Bate tribute game that the Danville players learned they would be wearing purple jerseys with “BHS” in gold lettering on the front, and the jerseys were a surprise for the fans in attendance at that game, even though the tribute had been announced in advance.

This year, the players knew well in advance of Friday’s game that they would be putting on the Bate jerseys once again, and Clevenger said they were excited about it.

“Most of our kids understand the significance of it, and they don’t want to come out and not perform well in those purple jerseys,” he said.

Clevenger said the event is taking hold within the school as a whole, and many of the teens in Danville’s student section Friday were wearing their own purple and gold.

John William Bate, who was born into slavery in Louisville in 1854, graduated from Berea College and came to Danville in 1881 to teach African-American students.

He began by teaching only five or six students in a one-room school, and that to an accredited high school that opened in 1912 and closed in 1964 with the onset of integration. Bate was a teacher and principal at the school for 59 years; he died in 1945.

Danville’s football players have been told about Bate’s story, and senior running back Isaiah Miller said it is good that he is being honored.

“I think it’s great,” Miller said. “He started out with five or six kids, and he wasn’t worried about how many kids he had, he was worried about giving them an education and then after that building up to more students and a bigger school.”

Thirteen Bate alumni were at Friday’s game and were recognized at halftime, and some of them said they’re pleased that this event also serves to help keep the memory of their school alive.

“I enjoy it. It’s really something that’s important that the Bate school stays (alive),” said June Christy, a 1949 graduate who is the oldest living Bate alumnus. “It continues the tradition.”

Ball, who played in the school’s band, said football games at Bate were “like a family affair.”

Christy, who played football, basketball and baseball for Bate, noted that the school produced a number of outstanding athletes, and Ball said it produced good citizens as well.

“They got a good education, and they were useful and productive citizens in the community wherever they went,” Ball said.