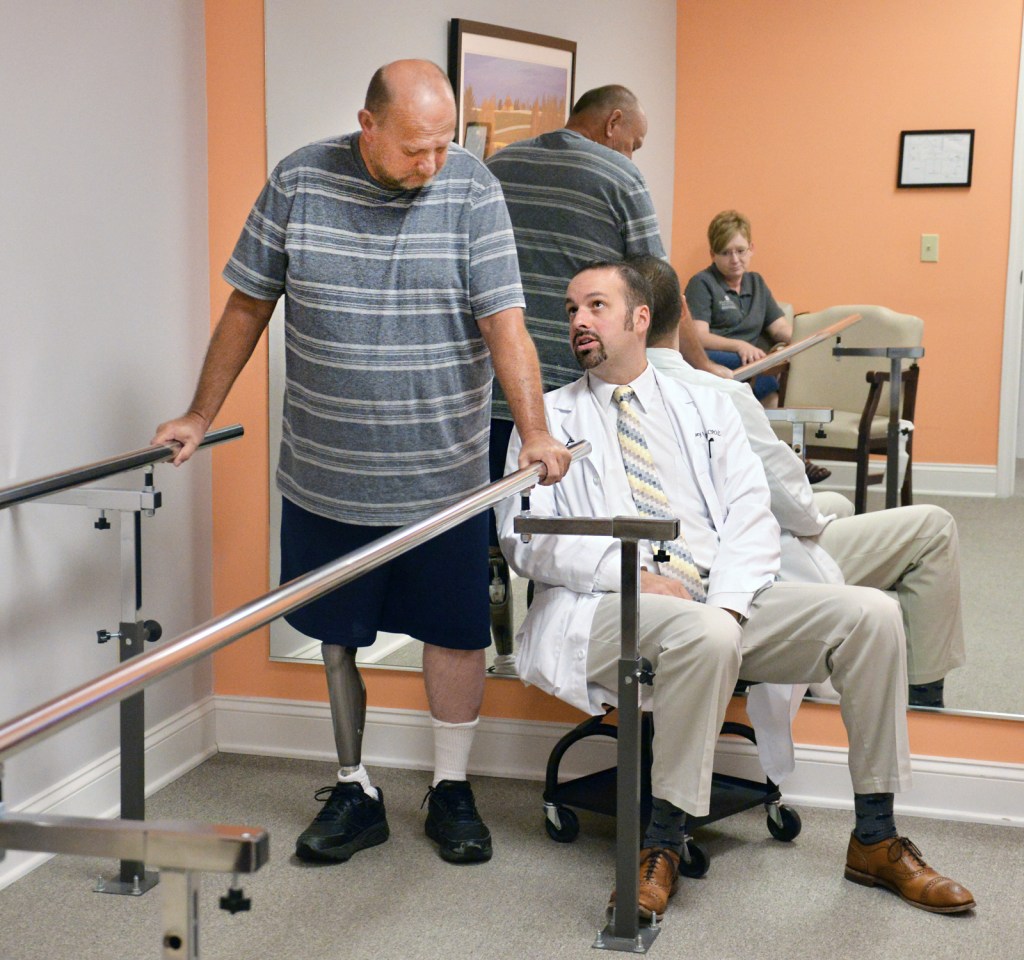 Photos by Robin Hart/robin.hart@amnews.com Conrad Hicks, of Junction City, tries walking on a new leg with a computerized knee as Casey Thomas talks to him about how the knee works

Thomas custom designs and fits prosthetics and orthotics for his patients at Kenney Orthopedics on South Third Street in Danville. His patients range from premature infants who require a cranial remolding helmet — due to flattening of the skull from laying down for long periods of time — to older patients who have suffered a stroke and need a brace for a condition called “foot drop,” Thomas said.

For leg amputees, “we custom design the whole leg from top to bottom, depending on the patient’s residual limb’s shape and what their activity was before amputation, what their goals are post amputation. Functional level is a big thing,” Thomas said.

One day last week Conrad and Judy Hicks, from Junction City, came into the office for Conrad’s final fitting of his new leg, complete with a computerized, bluetooth enabled, lithium battery-powered, rechargeable knee. 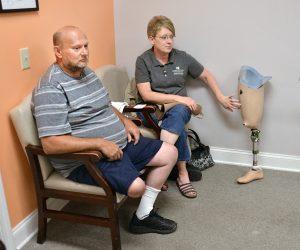 Conrad lost his leg from above the knee due to a motorcycle accident in Moreland back in November when a car pulled out in front of him, he said. The next four months he spent recovering with Judy as his primary caregiver. She was able to take off from work to help her husband, she said.

Eventually, Conrad was able to get around in a wheelchair. In March, he received a mechanical leg constructed by Thomas.

Because of insurance constraints, Conrad had to first use a “low tech” mechanical knee on on his prosthesis. Thomas said Conrad spent hours in physical therapy learning to use his hips to control the swing of the leg and how to lock the knee into place with each step so he could walk.

The “high tech” leg has a micro processor in the knee joint. “It knows he’s moving forward. It knows he’s about to take weight off it because he’s out at the end of the toe of the foot and so it knows it’s time to release and go to its low resistance setting so that way it will know to bend and swing. And then it prepares itself. It turns on hydraulic fluid and turns the resistance up on that because it knows its about to accept weight…It’s constantly taking hundreds of measurements a second and adjusting the hydraulics,” Thomas said.

“It has a brain,” Judy said laughing.

“Well two brains are better than one,” Conrad answered.

As Thomas intensely watched Conrad take a few more steps with the new leg, he said, “The alignment is off a little bit.”

Conrad took off the socket covering his entire thigh where the knee is attached and handed his leg to Thomas. Twisting a few screws with a screwdriver, Thomas made the bottom part of the leg more vertically straight.

They strapped the leg back on and Conrad took a few more baby steps, learning to trust the device.

Thomas then had to adjust the software. The leg came off again and Thomas turned the whole leg upside down next to his computer. “That turns the bluetooth on. It buzzes and let’s you know they’re talking to one another,” Thomas said.

Sitting at his computer with the leg nearby, Thomas said he was adjusting the knee’s software settings. “I’m adjusting the hydraulics to get it to bend the way I want it to. I’m getting it all set up specifically for Conrad — his weight, his activity level, shoe size, all that plays a factor into getting the knee set right,” Thomas said.

Conrad will also be able to make a few adjustments himself through his leg’s bluetooth and his smartphone. For example, if Conrad goes to a picnic out in a field, he can use his phone to tell the knee how stiff or loose it should be, making it safer for him to walk, Thomas said. 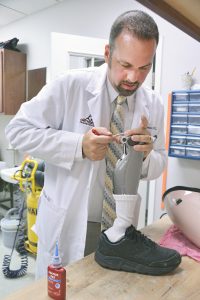 Casey Thomas locks in all the screws of a patient’s new knee on the workbench where he custom builds prosthetics for his patients.

As Conrad practiced walking, Thomas said he would still need to continue going to physical therapy to learn how to better control his new leg and walk more confidently.

Thomas majored in business at the University of Kentucky and worked one summer at Kenney Orthopedics in Lexington with the company’s founder, Mo Kenney, who is an amputee himself.

He said there are only 12 universities in the country that teach orthotics and prosthetics, which is “one of the younger healthcare fields out there.” Students study anatomy, engineering, physics and calculus.

Thomas also tries to help his patients and their families deal with the grieving process after losing a limb. It’s an emotional adjustment.

He said many times the patient is fighting a battle to keep their limb — usually due to diabetes complications – so they know amputation is a possibility and he helps prepare them for the amputation surgery if it becomes necessary. “Hopefully we won’t have to cross paths,” if the patient and their physicians can keep circulation functioning in the affected limb.

Other amputations have to occur because of trauma. Thomas said in these cases he goes to the hospital that day or the next and begins talking to the patient about what to expect following the amputation and what exercises to begin so muscles don’t atrophy.

Thomas knows they’re scared and confused after surgery so it’s important to him to help put their minds at ease and let them know he’ll help them “get back to normalcy” as soon as possible.

Prosthetic patients visit Thomas’s office periodically so adjustments can be made. Talking about Conrad, Thomas said, “I’m his leg mechanic, so he does have to come in to get tune ups.” The human body changes and fluctuations in weight affects the fits of his prosthesis, Thomas said.

Thomas told Conrad and Judy that his new knee comes with a three-year warranty from the manufacturer. It’s also waterproof — to a degree. He said the old computerized knees would short circuit if exposed to rain or water. But Conrad’s new knee will allow him to wash a dog or a car. And it will be OK if he gets caught in a rainstorm, which will really be beneficial since Conrad is already planning a motorcycle trip with his pastor to Mount Rushmore.

“I didn’t know I had the amount of friends that I have until I had this accident. That has really kept me upbeat,” Conrad said.

Thomas said most people aren’t aware of the need for his services. “You don’t know about us until you need us.”

Casey Thomas uses a heat gun to warm the rubber molding around the socket of a prosthetic leg so it fits the patient more comfortably.

Conrad Hicks, of Junction City, tries walking on a new leg with a computerized knee as Casey Thomas talks to him about how the knee works

Casey Thomas shows where the computerized knee’s lithium battery is connected so that it can be recharged. A full charge will last about 40 hours, Thomas said.

Casey Thomas, a practioner at Kenney Orthopedics in Danville, ties his patient’s shoe onto a new computerized leg.