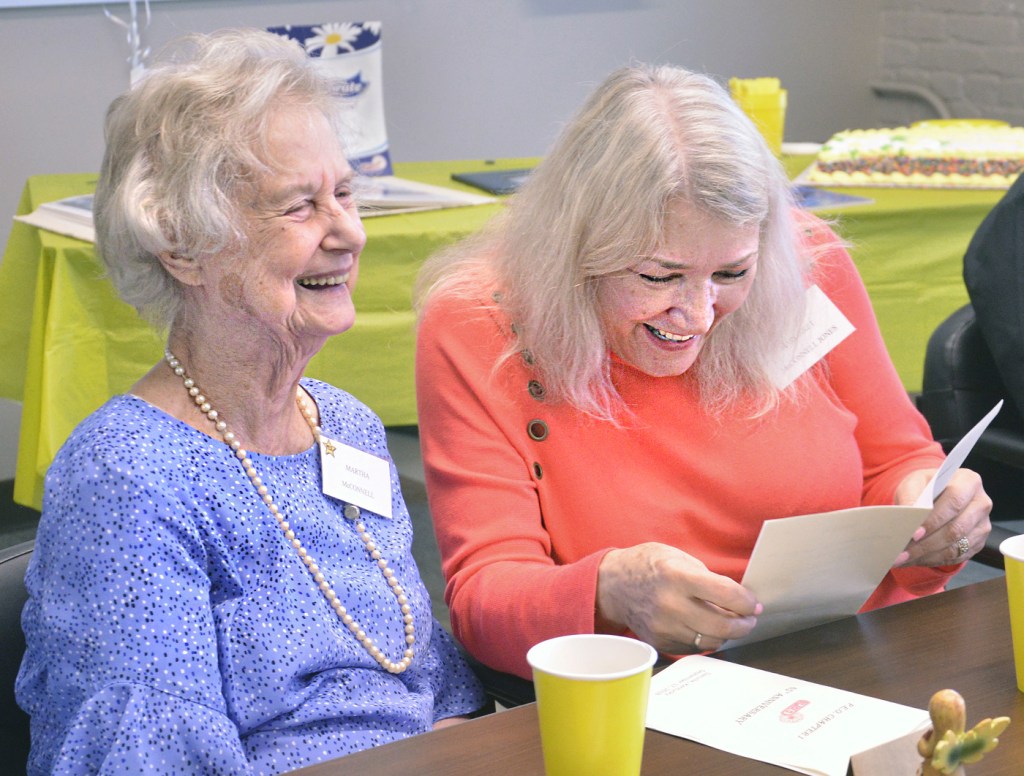 Photo by Robin Hart/robin.hart@amnews.com Martha McConnell, left, and her daughter, Margaret McConnell Jones look over a list of past and current members of P.E.O. Chapter I with during the group's 65th anniversary celebration Monday evening.

Boyle County’s only chapter of the Philanthropic Educational Organization (PEO) sisterhood celebrated its 65th anniversary Monday evening by honoring two long-time members and by awarding a $500 scholarship to a deserving young woman to help further her education.

During the group’s monthly meeting, Martha McConnell and Margaret Ann Milburn were recognized for being 60-year members in PEO. They both joined in 1958.

The PEO also presented Bluegrass Community and Technical College student Shelby Painter with a $500 scholarship. This is the second year Painter was given the award to further her education. She’s enrolled in the surgical technology program and drives from her home in Hustonville to the Leestown Road campus in Lexington, where she attends classes from 8 a.m. to 4 p.m. five days a week.

After receiving the award, Painter said she was originally going to use the money to help pay for gas to attend classes. However, she unexpectedly had to pay for an expensive car repair. “I am fortunate and blessed to be chosen for this year’s recipient” of PEO’s local scholarship, Painter said. The timing of the scholarship money couldn’t have been better, she said. 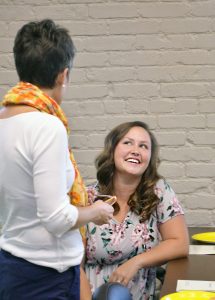 Photo by Robin Hart/robin.hart@amnews.com
At right, Shelby Painter, looks up to her mother, Dawn Hastings, before being presented with a scholarship from P.E.O. Chapter I during the group’s 65th anniversary celebration Monday evening. Painter attends BCTC and will be using the scholarship money to help pay for her transporation expenses while attending classes.

The local chapter started offering its own $500 scholarship two years ago to a female student attending BCTC, Simpson said.

Many times, women who are working toward a college degree are non-traditional students, Simpson said. So their organization “tries to help them as best we can.”

Money awarded to students doesn’t have to go just toward tuition, Simpson explained. Sometimes, the students need help in getting a laptop or transportation to school.

But even though PEO Chapter I has been active for 65 years — PEO International will be celebrating its 150th anniversary next year — many people may only be familiar with the group because of its traditional Chautauqua Tea event held on the Thursday before the Great American Brass Band Festival weekend for the past several years.

It’s the organization’s main fundraiser of the year to support their goal to help women in their pursuit of higher education.

When the local PEO Chapter I was formed on Sept. 9, 1953, “everybody thought it was a secret society. And now we want to get the word out that we’re doing good things,” Simpson said.

“Last year we were able to send $1,750 to PEO International to support all of their scholarships,” Simpson said.

There are nearly 6,000 PEO chapters across the U.S. and Canada and every chapter sends money they raise to PEO International to be distributed through its six philanthropies promoting higher education for deserving women, Simpson explained.

PEO International STAR Scholarship is a one-time $2,500 scholarship for senior high-school girls. More than 400 students apply across the U.S., and maybe 18 or so are given out, “so it’s a very selective group,” Simpson said.

Therefore the local chapter was extremely proud when students submitted by their group won the scholarship three years in a row: Kennedy Walls from Boyle County High School in 2015; Lydia Graham from Danville High School in 2016; and Elizabeth Lyons from BCHS in 2017.

Maggie Milby, also from DHS, had been nominated for the STAR Scholarship but wasn’t selected for the national award. So the local chapter awarded her a $500 scholarship from its own funds generated by the Chautauqua Tea, Simpson said.

• the PEO Program for Continuing Educations, which provides grants to women for purposeful educational goals; 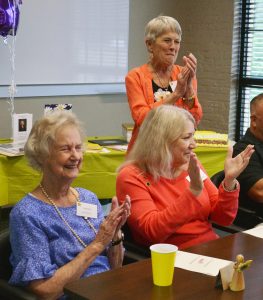 • the PEO Scholar Awards, which provides grants to women who are pursuing advanced degrees;

• Cotty College, which is a fully accredited liberal arts college for women in Missouri. It has been owned and operated by PEO sisterhood since 1927.

Simpson said there is a Danville connection to Cotty College is through Judy Rogers, who was a Centre College graduate and served as president of Cotty College for 15 years, until she retired two years ago.

PEO Chapter I has 34 active members, Simpson said, and membership is by invitation only. The local PEO chapter is a close-knit group of friends who enjoy continuing their own education too, Simpson said. They meet on the third Monday of the month, usually a member’s home where a speaker is invited to give an overview of their particular field of expertise.

Now, however, since the group has grown, they tend to go to other locations, such as the Danville water treatment plant, Community Arts Center and Centre College, where they learn different aspects of each institution.

The PEO’s emblem is a five-point star with the letters “PEO” in the center. Each point represents the organization’s five core values — faith, love, purity, justice and truth. “We try to keep these in mind in our personal life and our community efforts,” Simpson said.