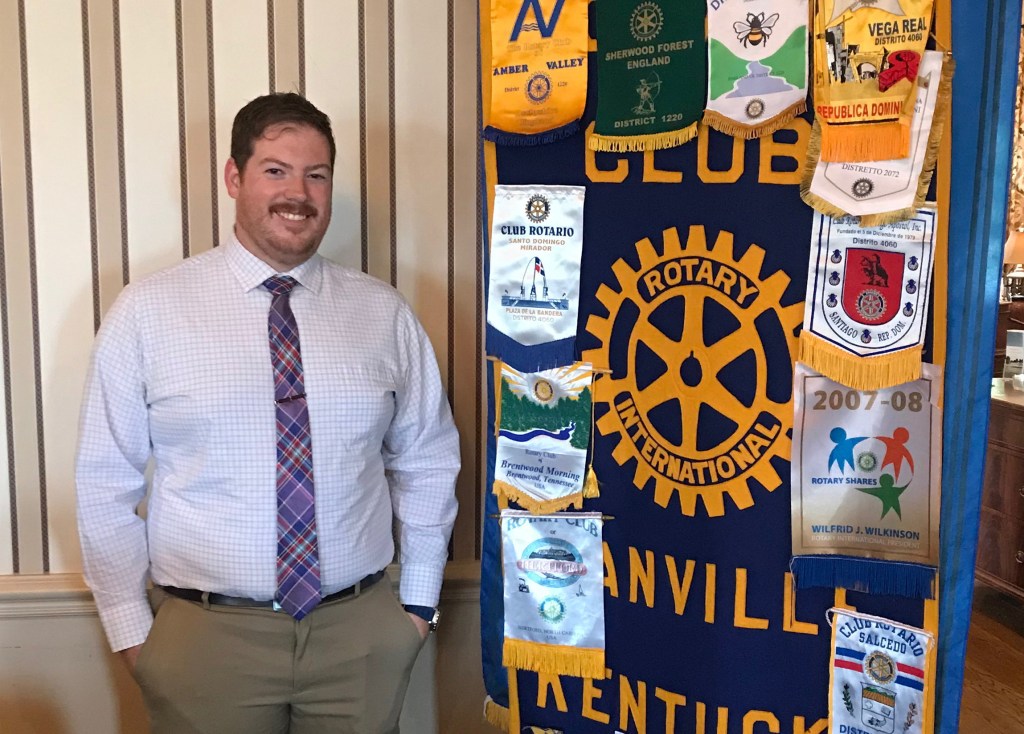 Nick Wade was named Executive Director of the Heart of Danville in February 2017. He told the Rotary audience he wanted to tell them about “what we do; why it’s important; and how our events fit into economic development.”

Wade maintains that downtown revitalization provides an atmosphere that attracts visitors and promotes Danville as a healthy community with a good quality of life. Retail and restaurants are one important sector of the Main Street program. But the goal is to provide a mix of professional businesses and government bodies to pull people downtown. Bringing their clients downtown for services feeds the shops and restaurants.

Mainstreet 4.0 is a national model of economic development based on four points. The model offers a community-based revitalization initiative with an adaptable framework that is customized for every community. The first point is to strengthen existing assets while identifying opportunities for new development and growth. The second point is to leverage each community’s unique historic character to attract visitors by promoting physical improvements and enhancing the historic fabric of our community. The third point, which is the most visible, is the promotion piece. Promotion positions the district as the center of area marketing activity.

The final point in Mainstreet 4.0 is organization. The heart of organization is creating a strong foundation for the organization. The program only has two staff members, everything they do is dependent on volunteers. After finding volunteers, getting adequate funds is critical. The last piece is community support.

Main Street programs have been around for over 40 years, because they work. They are a tried and true model of economic development on the town’s small businesses. The term used is “economic gardening.” The goal is to encourage entrepreneurs to invest and revitalize the assets block by block.

The four points work together to attract and retain talent, increase community involvement and spur business development. Events help accomplish these three things. Events bring people downtown and foot traffic brings customers into the businesses. Events can also be used as a recruitment tool for new businesses both downtown and outside of downtown. And finally events are a great way to create community support.

Harvest Fest, is the biggest event in the Heart of Danville’s event schedule in 2018.  Formerly known Octoberfest, it has been a community favorite event for several years. Initially, Octoberfest was created as a way to celebrate the wet/dry vote and it was the first event held in downtown with approved public drinking. But for the Heart of Danville, it was vital that it was kept true to the German culture, so they focused on German food; and originally sought authentic German bands. Now, the event has been opened up a bit to create a broader theme. The result is Harvest Fest was born.

Harvest Fest focuses on the entertainment. Studies have verified that music is a strong event attraction. The Lane Report that came out this month talked about the economic benefits of entertainment music tourism. Country music newcomer Brandon Lay will be the 2018 Harvest Fest headliner. He has just concluded the Around the Sun Tour with Kenny Chesney, Old Dominion and Thomas Rhett. Brandon will be accompanied by Danville’s own Brad Hardin, the Dylan Jasper Band and Magnolia Vale.