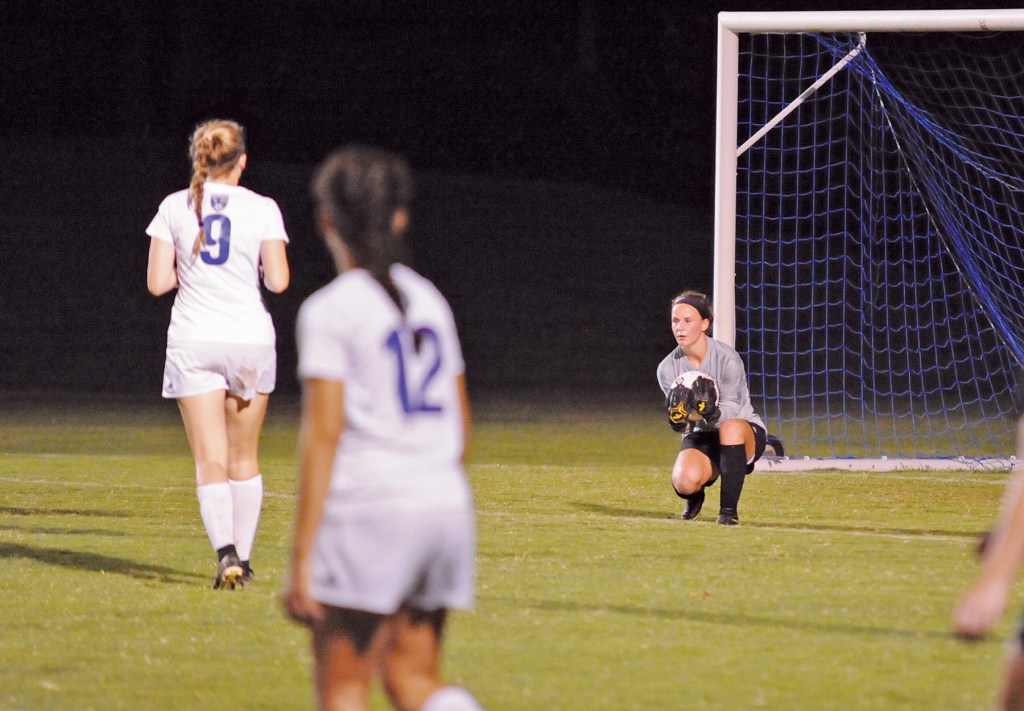 There’s no doubt about it: Danville’s girls soccer team has one of the best defenses in the region.

Anchored by senior captains Kailyn Wilcher and Grace Gaffney, the Admirals have given up just 11 goals in 12 games this season, tied with West Jessamine for the least amount in the region. The Admirals are 13th in the state with 0.9 goals per game, and Gaffney is among the statewide leader in saves, averaging just under eight per game.

“You can tell that we have seniors who are doing what they need to be doing,” head coach JD Smith said. “We’ve got two seniors on the back line, then Grace behind them. They don’t make a whole lot of mistakes, they cover for each other pretty well.”

The Admirals fell 2-0 at Lexington Christian Academy on Tuesday night in the All-A Sweet 16. It was just the second game this season that Danville has given up more than one goal. The other? A 4-3 victory against East Jessamine.

It’s a team effort with the seniors leading the way — Wilcher and Kaela Welch, two senior center backs, and Gaffney in goal.

“Kaela has had one of the quietest, consistent seasons,” Smith said. “Every game, I can count on her to be there. With those three, they’ve been doing it a long time.”

But there’s also freshman Natalie Fieberg who has stepped in for injured Ella McKinney and played well.

“I can’t say enough about Kailyn and Kaela, then you’ve got Natalie coming in as a freshman because of injury,” Smith said. “I thought she might be a midfielder all of preseason, but she’s stayed with it and she’s working extremely hard to make sure she’s improving and helping the older girls out.”

The players say that continuity from playing together their entire high-school career has been a big help.

“We’ve been together since freshman year, I think just building up and continuing to build up those talents together have really helped us, working together,” Wilcher said. “All my years here we’ve never really given up a lot of goals, so scoring a goal against us, you have to put your work in for it.”

Both Gaffney and Wilcher said they just know where the other will be on the field. They know when the other will and won’t be able to reach a dangerous pass or shot.

“Me and Kailyn go way back, there’s just an unsaid communication between us,” Gaffney said. “Corner kicks, she’s always there for me. She’s been really big and she’s really helped our younger players step in, her and Kaela as well. Having a strong defense, it builds into the midfield and forwards.”

The defense has been Danville’s strength, but it hasn’t led to many goals midway through the 2018 season. Danville has scored 25 goals this season, fourth-lowest in the 12th Region.

Opportunities aren’t easy to come by for the Admirals this year, and the defense has had to step up its play to prevent goals.

“Coming into the season, I knew that we were going to be strong defensively,” Smith said. “And they’ve found themselves under a whole lot of pressure this year, probably more so than last year. And they’ve handled it well.”

Danville’s offense has relied on taking advantage of opportunities, wherever they might come from. Sometimes that’s a Wilcher cross or free-kick into the box from midfield. Other times, it’s a Gaffney punt that ignites a counterattack. Wilcher has two goals and an assist this year; Gaffney has two assists (from goal) this season.

“We’re able to spark a lot of offense from the defense with Kailyn’s clearances, anyone’s clearances, punts and stuff,” Gaffney said. “I think our forwards know when free kicks, punts or goal kicks come up, that’s their opportunity to go and attack the goal.”

Wilcher said that the team has played defensively against some of its better opponents (Danville held top-25 Tates Creek and Boyle County to just one goal).

Smith said that when his team is up for a challenge, it’s because of a strong defensive performance.

“On the days that we’ve found ourselves giving up goals, we’ve been up and down with how we’ve stepped on the field,” he said. “When we’re up, we’re a hard team to beat and a hard team to score on.”

Wilcher said that Gaffney in goal has been a huge boost for the team for her entire career.

“It’s an unspoken communication between us, if I miss a ball, I know that Grace has got my back no matter what,” she said. “We make good saves, good plays, that’s what she is here for. She stops some of the most dangerous balls that I’ve ever seen that I can’t get to. She does the most unexpected things and we’re lucky to have her as a keeper.”

Gaffney said that Wilcher’s play has been vital for her, as well.

“She’s been solid, she’s a key to our defensive success,” the keeper said. “Anything in the air, that’s hers. Any clearance, she’s there. She just magically gets there sometimes.”

After their All-A exit, the Admirals will have time off before their Sept. 25 game at Pulaski County. They’ll play Franklin County at home on the 26th, with the final game of the regular season on Oct. 2.

After that, it’s time for postseason soccer and some ‘unfinished business,’ Gaffney said.

“I want to score on Boyle County, honestly,” Wilcher said. “As a whole, I want to win the district championship, I want that for our team. We’ve never had that, we’re always the ‘underdog’ in the playoffs. It’s always us and Boyle, and you never know, we could always do something magical. I hope we win the rest of our games, make it to regionals and hopefully make it to state.”

“I expect to send Boyle home,” she said. “I want to make it back to regional play, we’ve got some unfinished business with Mercer and potentially West. I’m not looking to stop any time soon.”