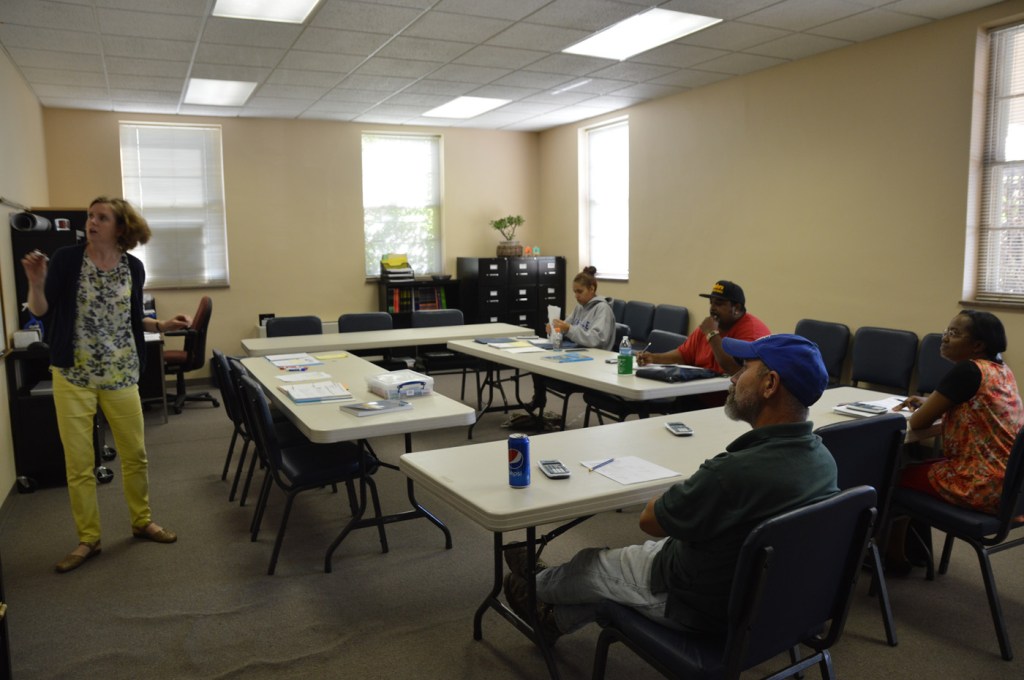 Photos by Bobbie Curd/bobbie.curd@amnews.com Beth Leahy teaching during an adult education class to prep students to take their GED

Patience and acceptance — that’s what instructor Beth Leahey says anyone will find if they come to Boyle County Adult Education. The program has found its new home inside of The Presbyterian Church of Danville on West Main Street, and now all it needs is for more adults to find the program, Leahey says. 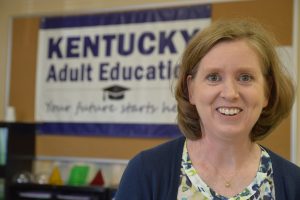 Beth Leahey is an instructor are the Boyle County Adult Education program. She has been teaching adult ed for more than four years, clearing “road blocks” so individuals can accomplish their educational goals.

She’s been teaching adult ed for more than four years now, and first began when she was an adjunct professor at Bluegrass Community and Technical College, after it received a grant to house and offer the program. This past spring, BCTC found out it didn’t receive the grant, but Kentucky Educational Development Corporation did.

“BCTC was great, but this just makes sense,” Leahey says, because the program was lumped in with larger counties, like Scott and Fayette, before. “At the state level, when they looked at a map, Mercer, Lincoln, Garrard and Boyle are all with KEDC.” Each county is allotted a certain number of seats to fill with the program.

Adult ed not only aims to help teach adults what they need to get their General Education Development diploma (GED), but also offers everything for free — the classes, the prep tests and the actual GED test, all which can be pricey. The program also offers a career counseling service, overseen by the Adult Ed’s director, Al Crout.

“All of this is out here for anyone who wants to learn. All they have to do is do it,” Leahey says.

On a sunny Tuesday morning, just before noon, four students sit in a math class with all eyes straight ahead on Mrs. Beth. She engages them, encourages them and asks them to contribute after someone brings up that they want to go over scientific notation again.

Marie Cadet is almost 50, although she looks nothing near it. She leans over her notes, color coded with highlighter and neatly printed in her spiral notebook, calculator in hand, intently focused.

She joined the class back in 2015, a couple of years after moving from Haiti. She met her husband, who’s from Danville, during a mission trip he made there.

“I’ve been here for seven years from Haiti, and coming here has helped me a lot — it’s helped my English,” Cadet says, adding she didn’t understand much when she first started. “Mrs. Beth is a good teacher. She helps me learn.” Cadet says Leahy “teaches from her heart and has the patience to explain things all of the time.”

Sure, things can be hard when you don’t know the language well, she says, but she has an optimistic outlook on life. Your problems, she says, won’t resolve themselves; you have to be the solution and not let them overcome you.

She is interested in being a nursing assistant one day, perhaps even a cook. Back home, she was in childcare, something she says she’s really good at, but doesn’t know if she could do it here. 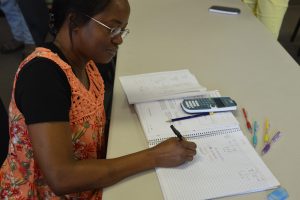 Mary Cadet leans over her notes during class. She is from Haiti and is interested in becoming a nursing assistant, or cook after completing the course.

“Because you have to talk a lot,” Cadet says, slowing but clearly. “But I like to work with kids, to play with them, dance and sing.”

Leahey says she doesn’t understand why someone doesn’t “snatch Marie up right this second and hire her, because she so sweet — and she could teach them a foreign language!”

Cadet speaks Creole, and says a classmate, Clarence Stone, most days will greet her with a peppy “Bonjour Marie!” when she walks through the door.

“I think Clarence likes to say that,” Cadet says, and smiles.

Leahey began teaching fresh out of Centre College in Daviess County, but returned to Danville years ago and continued working in educational jobs; she did a special project for the Bill & Melinda Gates Foundation and worked for the Kentucky Association of School Councils. When BCTC Director Erin Tipton approached her about teaching adult ed, she felt is was a natural fit. It’s still a natural fit, she says.

For her, making the connection with her students is everything, especially when she sees they are getting it. Many have been through a lot in their lifetime; she doesn’t always know who’s showing up, who will have childcare or transportation issues, who will not be able to get away from their job … And she notices if a students drops out, but she doesn’t give up hope; they’re always welcome back.

“This is a place of acceptance. Anyone can come knock on the door here, tell us they want to get their GED, and we will help them do it. All it takes is the desire and the work,” Leahey says. A lot of it is helping them remove the “roadblocks and barriers” they create for themselves by saying things like  “I’m not good at math,” or “I just can’t do this.” Leahey tells them, yes, you can, and to believe in themselves. Learning, she says, is like any goal — it takes discipline.

“You can always find something positive to say about someone in their learning. We highlight strengths. No one should feel hesitant about coming here or feeling ‘dumb.’ It’s about taking that first step, and we’re here to help.” There are no grades, so “semesters,” and the age-range is anywhere from 19 to 70.

Leahey recalls the first person she helped get her GED. As soon as she walked into the class, someone else told Leahey, “They said, oh, she’s been here before. And she had. She said she’d taken adult ed twice before and quit. But she was determined. She said she approached it like a job. She now has a good-paying job in Nicholasville, and I want you to know — she said she uses math all of the time. That was her roadblock. Now it’s not.”

The program starts with a call, and the person will be set up with an appointment with Leahey, Crout or teacher Gail Jackson. They complete some basic paperwork, then take the TABE — the Test for Adult Basic Education that shows what they already know, and what they need to focus on. After they feel they are ready, they can take the GED Ready Test, then on to the GED, which is in four parts — math, science, social studies and English. The program is also taught inside of the Boyle County Detention Center and at  Shepherd’s House, which Leahey says accounted for half of all of the GEDs earned last year through Boyle Adult Ed. Many who are incarcerated work to complete their National Career Readiness Certificate, too.

The program also can be useful for someone who is signing up for college classes and finds out they’re not ready for college math, for example. They can take adult ed classes for free instead of a remedial college class that would cost.

It also serves many homeschoolers, aged 19 and older, who want an official credential like a GED so they may move on to college or the workforce. Anyone who may struggle with the technical aspects of using a computer can use the Boyle County Public Library for free classes, Leahy says. An adult ed class is offered there on Monday nights.

Leahey, who teaches 24 hours a week, says she finds it “absolutely enriching.” These are adult learners, she says, so everyone brings their own life experiences with them.

“I try to convince my students that all of this belongs to them, and it’s free. There’s no reason it shouldn’t belong to them,” Leahey says. “If they choose not to learn something, that’s their choice. But why wouldn’t you try to learn, if you can?”

Clarence Stone testing at a computer.

Leahey helping Taylor Adams, 19 with maerial during a session

Beth Leahey speaks to Margaret Singleton during a class session.

EDP could add third employee through partnership with EKU