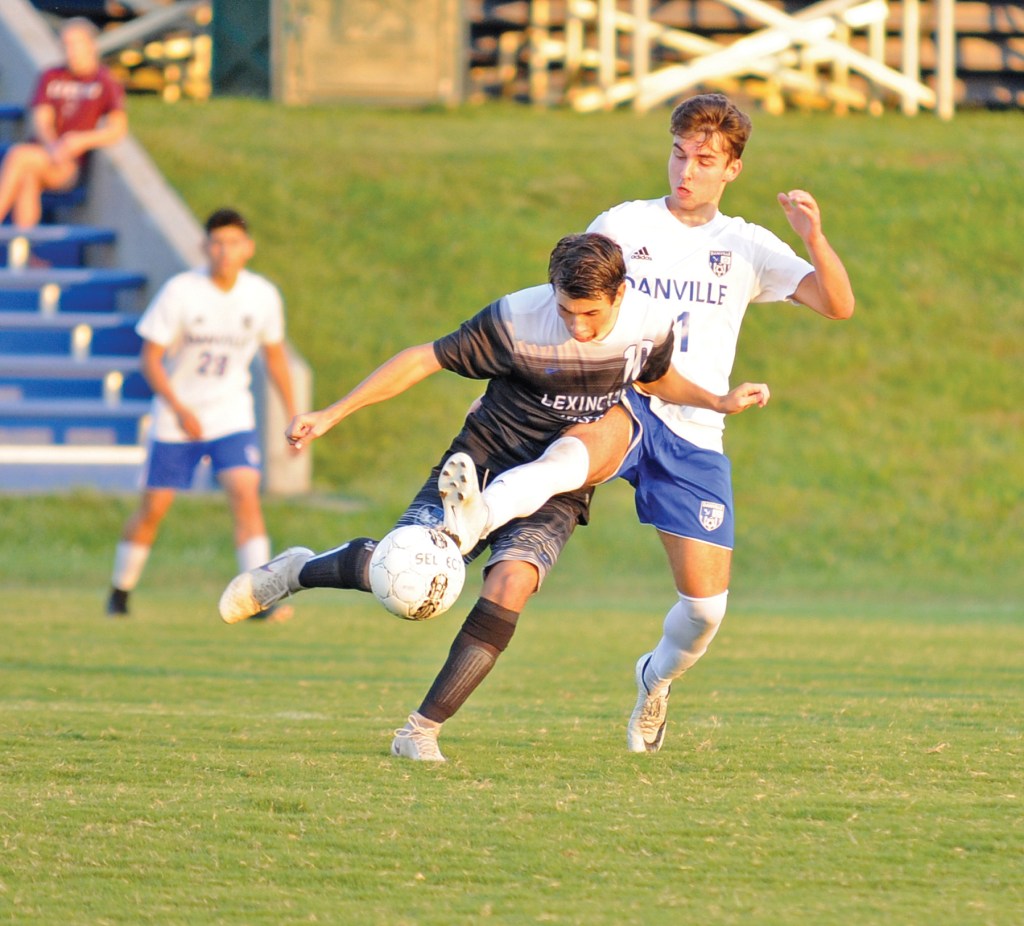 The Admirals are 10-0-1 and will take on the All-A State Tournament this weekend in Frankfort.

There are plenty of factors that have helped Danville this season, but it’s the center of the park that has steadied the ship for Brent Beauman’s side this year.

“It feels pretty great, the past few years we’ve been working toward this type of thing,” senior Alec McAllister said. “Last year, we knew we came out with a lot of talent, but we never really put things together like we are this year. All of the hard work has paid off so far this year.”

McAllister and junior Briar Sanders are the two center midfielders for Danville and you’ll rarely see them out of a contest. Behind them, junior Sam Brunner has moved to center defensive midfield and steadied the middle of the pitch.

“This is a very technical team,” Beauman said. “Having Sam step up and play defensive center mid has been big because that’s always been the problem with Briar and Alec the past few years. They’re creating a lot, but there’s always a gap behind them that allow easy goal-scoring opportunities. Having Sam there allows them a little more freedom to move and do what they’ve got to do.”

Danville averages more than four goals per game and it’s McAllister and Sanders who are the catalysts. Sanders leads the team with 11 assists this season and is among the top assists leaders in school history. He could set the career and single-season assists record this season. He’s also got six goals.

“Gary Reynolds and I used to talk about Briar at Tolliver, ‘man that kid can fly.’ He still can,” Beauman said. “They do a really good job, their work ethic is what gets us a lot of chances and opportunities and that leads to wins. Briar has 11 assists this season and that puts him near the top 5 all-time. He’s in good shape to break the season record and the all-time record this year. And that’s a goal of his, that’s the type of player you want. He likes setting people up and creating the play.

McAllister has six goals this year and six assists so far this year.

“They go and go and go. It’s crazy, their fitness, their speed,” Beauman said. “They’re phenomenal technical players. Alec is probably the most committed to soccer of a player that I’ve ever coached. His diet, he’s there early stretching, he stretches after. Everything he can do to put himself in the best spot, he does. Alec is a great captain and leader, anyone who has spent five minutes with Alec respects him and sees that he’s top notch. He does a good job leading the guys. It’s good to have those type of guys anywhere, but especially holding down the middle is huge.”

McAllister said the team in general has greatly improved. They’re committed to playing their style of soccer.

“Coach is really big this year, since we have so many technical players in the middle, he really wants us to find a few quick combinations and then look for somebody moving forward,” McAllister said. “As soon as we get it, we’re looking for that quick pass so we can switch to the other side and find somebody in behind.”

The Admirals can attack in a multitude of ways, and there’s plenty of players who can score. There have been 16 players score or assist at least once this season.

Part of that is that the team is just better overall. Defenders play the ball out of the back into the midfield, who then feeds the forwards. Players are unselfish with their play, and the core of the team has played together for the past three years.

“We’re working it from the back more than last year, which is huge for sure,” Sanders said. “We’re not losing the ball in midfield as much as last year, it just feels better. We’re comfortable with the ball at our feet. I feel like this year we’re all really comfortable with each other this year, it just makes for a better overall team play. We talk more often, we feel more open to criticize each other, that’s for sure.”

The players say that their criticisms come after goals have been scored. The Admirals tend to let up — evident in Wednesday’s victory against Lexington Christian Academy in the All-A State Tournament Round of 16.

Danville scored the first two goals in 15 minutes of play and then cruised to a 2-0 halftime lead. The Admirals added a goal 11 minutes into the second half before LCA scored. After another Danville goal, LCA added another to make the final score 4-2.

“Definitely we tend to have moments where we play really well at the beginning of the game, score a few goals and then we kind of drop off a little bit,” McAllister said. “Coach has been talking to us about it in practice, staying focused. When we get tired, he’s on us and he’s making sure that we’re really good with our technique and still focused. We need to obviously improve that, when we got tired in the first half and when we thought we were in control of the game, things kind of got out of control. It’s something that we have to keep in consideration.”

When that lack of concentration happens in-game, Sanders said the team gets lackadaisical on the ball.

“We always work hard to get the ball, then we lose it afterwards, whether it’s a bad pass or just dribbling into the other team, stuff that we can still work on,” he said.

The answer to that problem? Possess the ball. With technical players all over the field, Danville can play the possession game when it goes ahead early in games.

“We’re definitely a team that can keep the ball when we get it, we can expose teams when we keep possession and move them around,” McAllister said. “Sometimes I think we just get in a rush to attack, attack, attack. Our strength is really to keep the ball and possess against the other team. We’re always looking for that final pass and everyone is finishing, we’ve gotten goals from all over the team. It’s working out well.”