EDP could add third employee through partnership with EKU 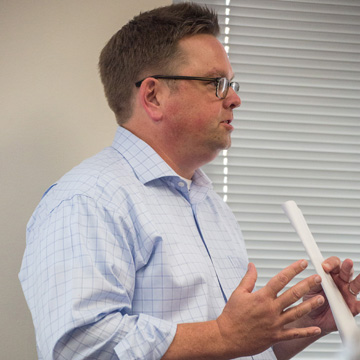 Ben Kleppinger/ben.kleppinger@amnews.com Tom Martin, executive director of the Center for Economic Development, Entrepreneurship and Technology at EKU, speaks to members of the Danville-Boyle County Economic Development Partnership board Wednesday morning.

The Danville-Boyle County Economic Development Partnership has a chance to grow its staff to three people through a KY Innovation proposal.

KY Innovation is a project from the Kentucky Cabinet for Economic Development that plans to fund “hubs” around the state that would help entrepreneurs develop and expand their businesses.

The Kentucky Innovation Network office at Eastern Kentucky University is one of the groups pursuing funding through KY Innovation for a proposal, and EKU’s proposal includes partnering with the EDP in Boyle County to serve as an “entrepreneurial hub” within a 27-county region, said Kristel Smith, executive director of the Office for Entrepreneurship and Innovation at EKU.

EKU’s proposal would use as matching funds the approximately $90,000 the EDP has allocated for salary and benefits for its vice president/chief operating officer position, which is currently vacant. If the proposal is chosen, that would secure funding from the state for another position at the EDP, Smith said.

The EDP’s chief operating officer would also serve as executive director for the KY Innovation hub, and the newly funded position would serve both as the EDP’s “economic development specialist” and as assistant director for the hub, explained Jody Lassiter, president and chief executive officer of the EDP.

“What we’re seeking to do is to develop an innovative economic development plan,” Smith said. “… We think that Danville is primed to be that area that’s a leader.”

Tom Martin, executive director of the Center for Economic Development, Entrepreneurship and Technology at EKU, said the proposal aims to “(meet) the needs of founders, inventors, investors and small business owners, connecting them to the resources, the partnerships and the capital they need to launch, grow and scale their businesses.”

Boyle County is ahead of the curve already on economic development, which makes it a great candidate to serve as a hub, Martin said.

“We want to scale to a certain degree what you all have been doing here for a while,” he said. “… The work that you all are doing is light-years ahead of what other communities are doing.”

According to the state’s request for KY Innovation proposals, Kentucky wants “to create innovation-driven entrepreneur ecosystems that are led by entrepreneurs for the sake of cultivating and growing new, high-growth startups/scaleups by taking advantage of regional dynamics, strengths and sector clusters.”

“Although Kentucky has made progress in fostering early stage and high-potential growth ventures, many of its geographic regions lag or languish in innovative business creation, attraction and expansion,” the request for proposals states. “Even in parts of the state where more robust startup economies and communities of entrepreneurs exist, there are missed opportunities to capitalize on proximity to connections and assets that would drive even greater success.”

Lassiter said the proposal meshes well with the EDP’s existing strategic plan, which includes goals for developing entrepreneurship. He said it turned out to be a good thing that the EDP couldn’t find a suitable person to fill the COO position after former COO Hal Goode left earlier this year.

“I guess it was good fortune that we didn’t pull the trigger previously, because now we have the opportunity to leverage and actually gain staff,” he said. “This will allow us to actually meet more objectives by partnering with EKU … we will have staff based on Constitution Square … being able to assist entrepreneurs and innovators in our community.”

Members of the EDP board learned Wednesday that the two positions would work for the EDP specifically and would not report to EKU; and that the COO position would still include fundraising for the EDP as part of the job description. The EDP board voted in favor of pursuing the proposal with EKU.