Report: Boyle and Mercer counties need a bigger jail, big changes to their criminal justice system, or both 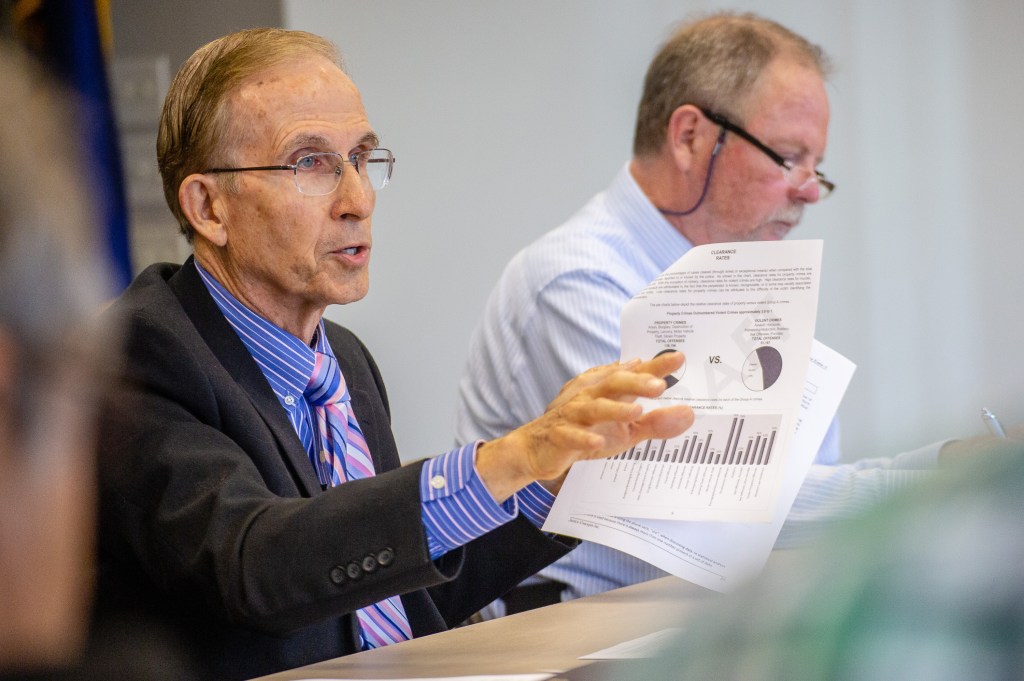 Without major changes in how the criminal justice system operates in Kentucky’s 50th circuit and district courts, the area could need a jail more than three times the size of its current one within 20 years.

That’s one of numerous findings in a 106-page “jail and justice system assessment” released in draft form to public officials in Boyle and Mercer counties Friday afternoon.

Without a bigger facility and/or changes in procedures to bring the jail population under control, there is a serious risk that the 220-bed Boyle County Detention Center could be sued for violating inmates’ constitutional rights, said Dr. Kenneth Ray, one of the consultants who produced the report for the fiscal courts in Boyle and Mercer. A lawsuit could allow a federal judge to essentially take control away from local officials and mandate exceedingly expensive upgrades and changes that local taxpayers would have to pay for, Ray said.

“No jurisdiction has survived the consent order (from the federal government after a lawsuit) without completely turning the criminal justice system upside down, in some cases tripling the cost of incarceration,” he said.

To avoid such a situation without changing how they do things now, the two counties would need a minimum of 420 beds in their jail today, Ray said. His projections, based off of more than 80,000 jail records dating back to the early 2000s, estimate the counties will need at least 508 beds or as many as 554 beds 10 years from now. Those numbers balloon to between 693 and 756 beds 20 years from now.

The jail is currently in “what I call tinderbox status,” Ray said — “It takes a spark and it’s going to go.”

“But for the excellent management of that facility, and the way in which I saw your officers and staff treat the prisoners with respect, and how clean it was — I think that’s kept you going longer than many others would,” he said. “… But it wouldn’t take much of a spark to trigger litigation … to put you in a position to then have literally somebody else telling you how to run your criminal justice system.” 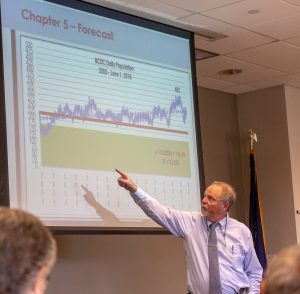 Ben Kleppinger/ben.kleppinger@amnews.com
Consultant Dr. Kenneth Ray with RJS Justice Services points to a chart showing how long it has been since the Boyle County Detention Center was within its total or operational capacities (2003-2006).

Why are there so many inmates in the jail?

“The jail is greatly bloated by three factors,” according to the report, which is expected to be released in draft form to the public via the Boyle County website this coming week. “(1) Very slow felony case processing, (2) An apparent refusal to set non-financial bonds, (3) A very high incidence of revocation of initial bonds and rearrest after being indicted by grand jury.”

Dr. Allen Beck, the other lead consultant on the report with Ray, said it’s simple to think of two things that “inflate the jail system” — how fast cases get processed and the availability of release before trial. In both cases, Boyle and Mercer counties’ court systems have miserable numbers, Beck said — numbers that make him say “ugh” or “geeze, oh Pete.”

Beck compiled a comparison chart in the report showing the percentages of inmates who were released on non-financial bonds, meaning they could leave jail while awaiting trial without having to pay money first.

By contrast, statewide in 2017, judges set non-financial bonds for defendants about 39 percent of the time, according to one of the prior AOC reports.

Beck pointed to the 2013 circuit court data for Mercer County specifically — 0 percent of circuit-court defendants were allowed to get out of jail without paying money.

“Very possibly the problem of jail overcrowding would not exist if felony case processing was just moderately faster,” the draft report states. “For example, disposing of 50 percent instead of 21 percent of cases within 90 days and disposing of 80 percent instead of 62 percent within 180 days. Given that many counties similar to Boyle and Mercer counties process cases faster, such improvements should be relatively easy to achieve.”

But there could be a roadblock to speeding up the process, according to comments from the consultants: a lack of participation from the judges serving Boyle and Mercer counties.

“Is this something that is normal? Is it not normal? How did it affect the study?” Caywood asked.

Beck said he “asked a lot of questions of everybody else that’s in the system” and was able to get a good understanding of the local criminal justice system anyway, especially by interviewing a lot of attorneys, including county attorneys and many private attorneys.

Ray said judges will sometimes try to argue “we can’t do anything” — that it’s up to the prosecutor and defense to work out deals. That’s simply not true, he said.

In another jurisdiction that the consultants are working with, there are much better rates of release from jail and it’s helping keep the inmate population there under control, Ray said. The other jurisdiction — which is more than twice the size of Boyle and Mercer counties and is a “tough, impoverished” community — has succeeded by implementing a “very, very robust array of alternatives” to incarceration, he said.

But “what they also have is a criminal justice system that is working very close together and not a single judge refuses to participate — none,” he said. “In fact, they’re the first ones in line to say what they want to say, to say, ‘Here’s how we want to fix it.'”

Ray said “without those judges on board” in Boyle and Mercer Counties,” he fears “the system is going to stay stuck.”

Peckler and Dotson have both declined or not responded to requests for interviews from The Advocate-Messenger in 2017 and 2018 concerning their courts’ rates of non-financial bonds.

As part of the jail study process, Boyle and Mercer counties formed a Criminal Justice Coordinating Council, made up of representatives from across the entire criminal justice system, to brainstorm solutions and look for ways to improve. In November 2017, Boyle County Deputy Judge-Executive Mary Conley said she was unable to get Peckler on-board with the idea of having a judge on the council.

“He was pretty adamant that there would be no (participation),” Conley said at the time. “… He thought it was putting he and his office in a possibly litigious situation. If something happened, that he didn’t want to have to be sued and be sitting on a committee that would get sued. I didn’t quite understand.” 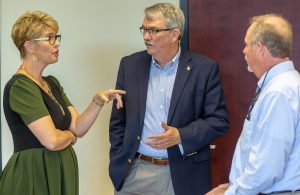 Now that the draft study is completed, public officials expect to take at least a month to read through it and identify any errors or changes they want made before a final report is released. Judge-Executive Harold McKinney said he wants the public to see the report and have a chance for input at a public meeting, held in the evening so many can attend.

“I’m looking forward to getting public input from some folks that will have expertise,” McKinney said after Friday’s presentation, which lasted more than two hours. “It’s a very, very complex problem. That’s the main thing that came out of this presentation today.”

The draft jail and justice system assessment released Friday has many more findings and much more data on the criminal justice system in Boyle and Mercer counties than could fit in a single story. Watch for more stories about the report in future issues of The Advocate-Messenger.