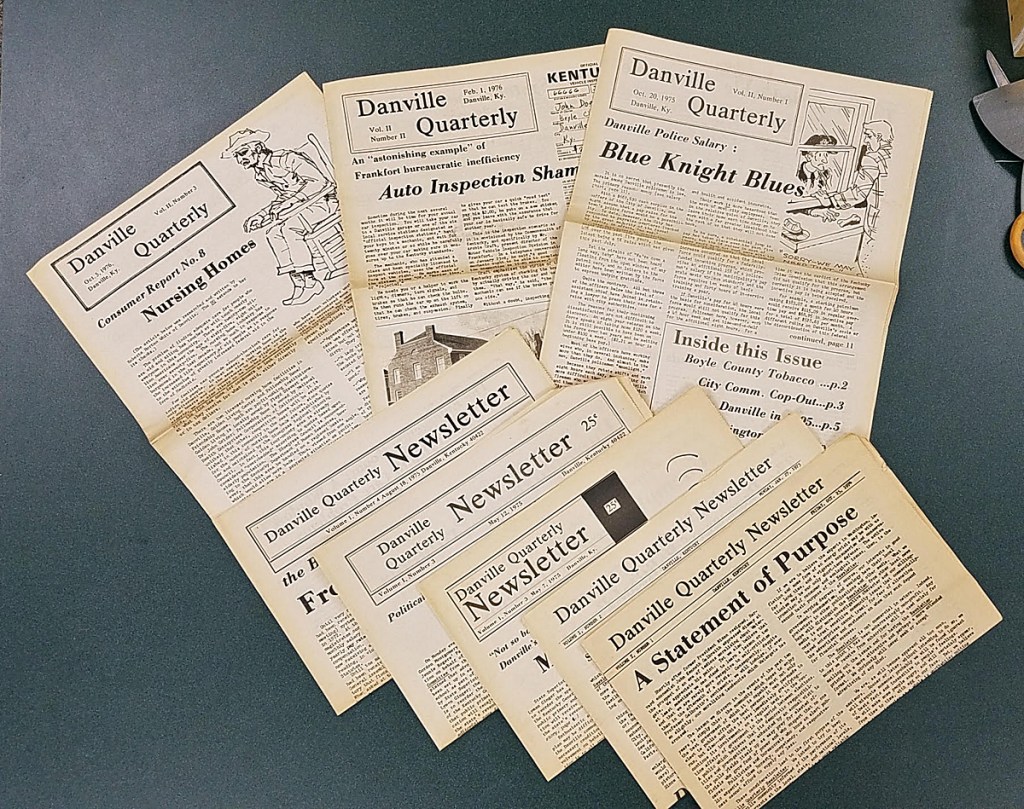 Photo contributed Copies of the Danville Quarterly Newsletter are on file at the Boyle County Public Library.

The Danville Quarterly Newsletter was published for two and half years in the 1970s and ceased publication in March 1977.

“It was the era of Watergate at the time and we thought more articles should be printed,” Milton Reigelman said. “We also wanted to write about starting a farmers’ market, and some of the blight issues in town.”

The editors were not satisfied with the way The Advocate was covering local and national current and political issues.

“I look back at the quarterly with great delight at the experience. It also was a way to meet a lot of people since I was new to Danville at the time,” Reigelman said. “It was a way for young people to get to know more about the town.”

Reigelman, Milton Scarborough, both professors at Centre College, and Annabel Girard, who later became a reporter for the Advocate, was the staff.

The newsletter featured a quiz with five questions for its subscribers to answer about a subject only found in the current issue of the newsletter. Clarke and Richardson compiled the questions.

Like the newspaper, the quarterly was put together with the “cut and paste” method. It was printed in Columbia. The editors delivered the quarterly via automobile.

While the business was not a money-maker, Reigelman said they almost broke even, but “we just got too busy to keep it going.”

A year subscription was $1. At its peak, the quarterly had 500 subscribers.”

Subscribers were notified in a letter to the editor of The Advocate-Messenger on March 4, 1977, of the end of the quarterly.

Reasons for ceasing publication was one the staff had taken on major responsibilities in the upcoming election; all three were working on the campaign; one of the staff was serving on the Boyle County grand jury; two began other writing projects; and another was going to be away from Danville for several months in the near future.

Also, an increase of printing costs and writing and publishing the paper required too much time.

The letter also said the cease of the publication would be temporarily since the three “have found our work on the Danville Quarterly so satisfying.”

“The most attractive thing about the ‘DQ’ has been its special audience: selective enough to seem almost intimate, concerned enough to make an actual difference in the community.”

Reigelman said plans for reviving the Danville Quarterly have been discussed but no decisions have been made.