Redbone comes home to Kentucky for a fusion of cultures 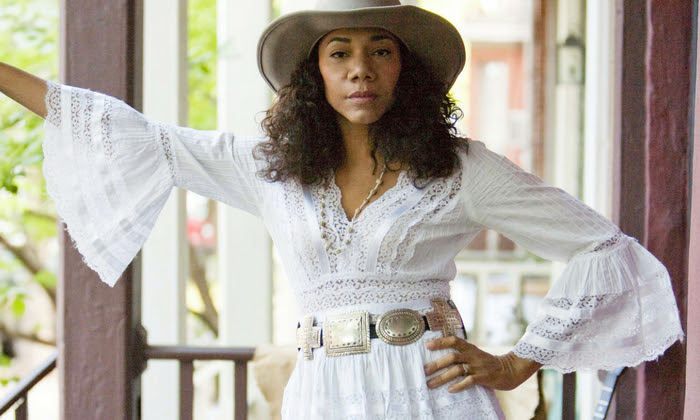 Photo contributed Martha Redbone is an award winning musician bringing her “tasty gumbo” of sound in her Roots Project to the Norton Center on Sept.28.

Martha Redbone will be rolling her Roots Project into the Norton Center on Sept. 28, bringing her “tasty gumbo” of sound to Weisiger Theater.

Redbone is a multi-award winning musician and one of today’s most vital voices in American Roots music. Her music embodies the folk and mountain blues sounds of her childhood in the Appalachian hills of Kentucky, mixed with the eclectic grit of her teenage years in pre-gentrified Brooklyn. With her gospel-singing father’s voice and the spirit of her Cherokee/Choctaw mother’s culture, Redbone broadens the boundaries of Americana.

“Martha Redbone and her music are the epitome of Kentucky roots music,” said Norton Center Executive Director Steve Hoffman. “Her songs conjure up traditional blues, fresh indie-folk and Appalachian bluegrass in a masterful live experience with an intelligent Americana vibe.”

From humble beginnings with residencies at the original Living Room on the Lower East side and at Joe’s Pub, and nationally at powwows across Indian country, Redbone has built a passionate fan base with her mesmerizing presence and explosive live shows.

In a recent interview, Redbone touched on her relationship with her Kentucky roots, remarking, “I was raised in Harlan County, and went to elementary school in Lynch where I lived with my grandparents, my grandfather was a coal miner, those hills are in my blood. I’ve always come back to visit, but coming back and performing our music live is a real treat for me.  [ . . . ] what better way to celebrate than honoring the music of our home? I’m truly thankful for such wonderful blessings this music project has given.”

Alongside her career as a recording songwriter, Redbone has maintained a steady involvement with causes close to her roots. The Redbone/Whitby team’s newest work is Bone Hill — The Concert, “a devised, interdisciplinary musical theater work that brings to light an important piece of American history that has never been told as inspired by the lives of Redbone’s own family.” Additionally, Redbone teaches the Southeastern Traditional Singing Workshop for the United Houma Nation’s Bayou Healers Cultural Enrichment Camp program and guest lectures at a variety of institutions across the nation on subjects ranging from indigenous rights, the role of the arts in politics, and Native American identity.

For more information, contact the Box Office at 859-236-4692 or Toll Free at 1-877-HIT-SHOW (448-7469). To buy tickets online, request a brochure, or for additional information on other performing artists, please visit NortonCenter.com. For insider information and updates from our performers this season, follow us on Twitter (twitter.com/NortonCenterKY), become a fan of the Norton Center on Facebook (facebook.com/NortonCenter), or find the Center on Instagram (nortoncenterky).

• Martha Redbone Roots Project will be 8 p.m. Sept. 28 at Norton Center for the Arts. Tickets: www.NortonCenter.com, (859) 236-4692. An artist gathering will be hosted 4:30-5:30 p.m. before the show in Weisiger Theatre, and participants are invited to bring instruments and play with the band. More information can be found on the event page. RSVP to Jessica.durham@centre.edu.