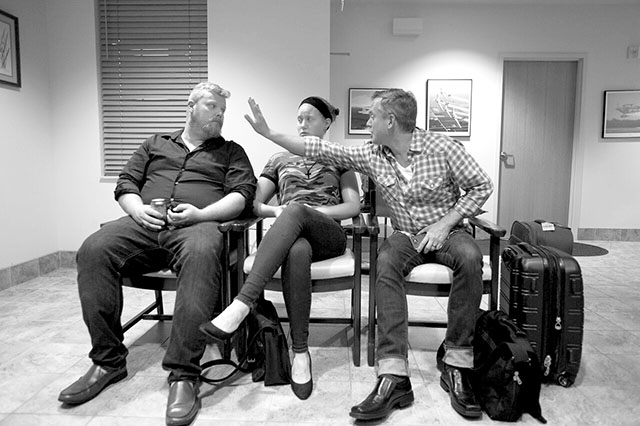 Celebrating the finish of its third season in Danville, Scarlet Cup Theater is featuring its first comedy — a British show by playwright John Godber.

As a site-specific theater, Scarlet Cup travels to different venues to present plays related to the space. Godber’s “Departures” takes place in 10 airports around the world, with the underlying theme that all airports are alike, except for the foreign languages coming over the loudspeakers. The play will be performed in the lobby of Stuart Powell Field, the municipal airport for Danville and Boyle County.

Directed by Anthony Haigh, a retired drama professor from Centre College, “Departures” features four actors covering nine roles as they travel around the world — as passengers, crew members, airport hookers, businessmen and families playing out their lives as they await the next announcement.

The cast includes Eric Seale, of Springfield; Stephanie Pistello and Drew Sutherland, both of Lexington; and Fannie Lemasters, of New York. Elizabeth Haigh is serving as sound designer and stage manager.

Tickets are on sale now at danvillearts.org, the site for the Arts Commission of Danville/Boyle County, the new fiscal sponsor of Scarlet Cup Theater; can be ordered from the Scarlet Cup Facebook page; or by calling (859) 319-1204.

“Departures”  opens Thursday, Oct. 4 and runs through Sunday, Oct. 14. Showtimes are 8 p.m. Thursday-Saturday and 7 p.m. Sunday. Tea will be served to those who come early, courtesy of Elmwood Inn Teas.

Scarlet Cup Theater always provides an outreach program designed to enrich the theater-going experience for its upcoming plays. “Come Fly With Us” will be offered 3 p.m. Sept. 30 in the reading room of the Boyle County Public Library. It will feature David Roberts, a member of the SCT board who spent nine years as a flight attendant, who will share “war stories” from the point of view of flight attendants. Also, a representative from the Stuart Powell Field Airport Board will share some history and hold a Q & A about the airport.