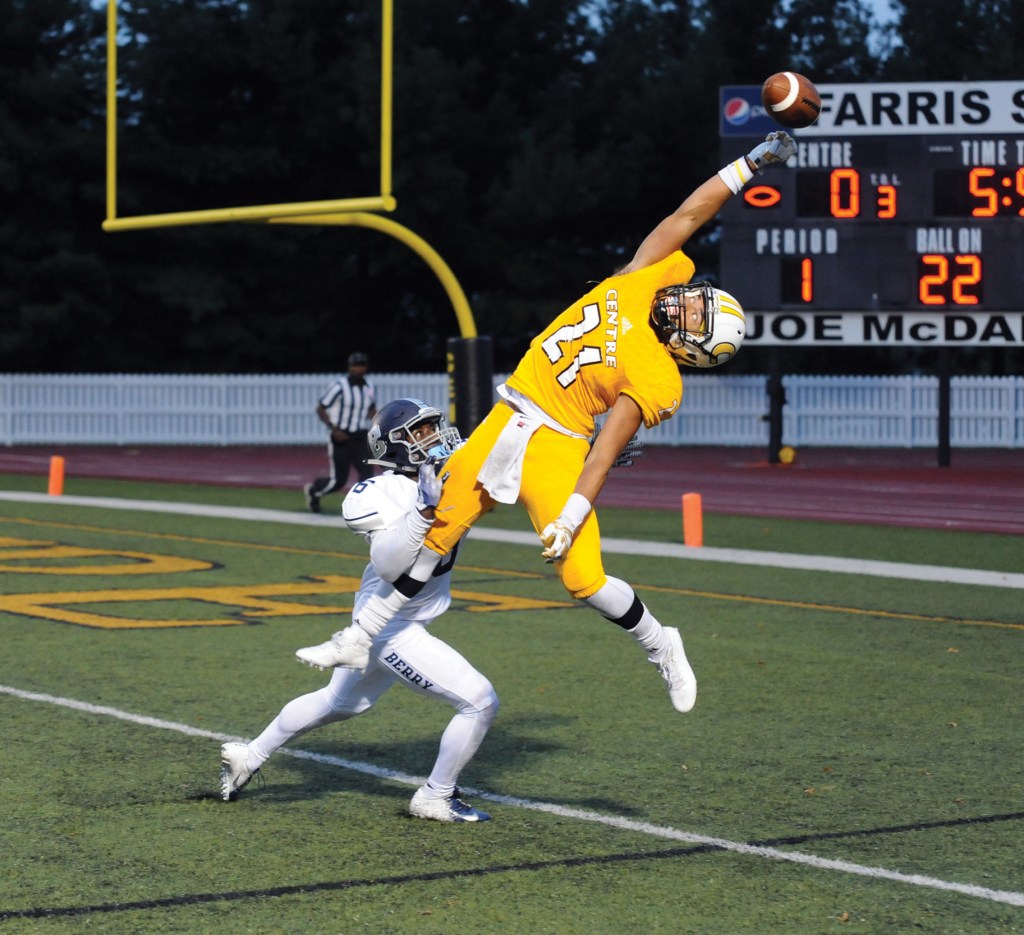 Three points separated two of the top teams in the Southern Athletic Conference on Saturday.

Centre College dropped its first game of the year to Berry College in a 38-35 overtime thriller at Farris Stadium.

The Colonels dug themselves into a hole early with turnovers and battled back to tie the game in regulation before failing to match Berry’s field goal in overtime. The two teams combined for 886 yards of offense, but it was Centre’s offense that moved the ball with ease on a rainy night in Danville.

Berry jumped out to a 7-0 lead on its first drive of the game and Centre’s offense gave up a touchdown after a fumbled snap in the end zone to quickly put the Colonels behind 14-0. Just seven minutes had passed in a crucial SAA test. Centre went 9-1 last year — the only loss coming at Berry. The Vikings won the SAA regular-season title.

But Centre rebounded in a big way. Colin Burnam ran in a touchdown after Centre marched down the field on its next drive, and quarterback Tanner Young would hit Jordan Gunter for a 22-yard score.

Berry added a one-yard touchdown run before halftime to take a 21-14 lead into the break.

Three of Centre’s six first-half drives ended in a turnover — two interceptions and a fumble.

Despite those turnovers, the Colonels were very much in the game and that showed in the second half.

“We battled back from adversity. We put ourselves in a 14-0 hole and our kids battled back,” Centre head coach Andy Frye said. “In life, just like in a game, you’ve got to battle back, you never give up. That’s what they did. Did we give them the opportunity to win? Yes. That’s the frustrating thing, the kids know that. The mistakes that we made, made this game closer.”

Centre opened the second half with a 10 play, 76 yard drive that again ended with an interception. But the Colonels’ defense held strong, and the offense responded with two touchdowns — one rush by Trevor Carnell and a Young TD pass to Davis Kannapell. Centre had taken a 28-21 lead at the start of the fourth quarter.

Carnell and Burnam combined for 34 carries, 205 yards and two touchdowns.

But Berry responded with back-to-back touchdowns to go ahead 35-28 with just 2:47 remaining.

Then Young hit Jaylon Hibbs for a 20-yard touchdown on fourth down with 59 seconds remaining.

The game would go into overtime. Berry opened with the ball and hit a field goal. Centre also opted for a field goal after gaining five yards on three plays, but the field goal attempt was no good.

“Our kids really thought we were the better football team,” Frye said. “I’m not going to take anything away from (Berry), they won, they were better in the end. But our kids, how we rebound is probably the most important thing that I’m going to look for, how we respond to a tough loss. We don’t lose very often so this is tough. I also have a lot of belief in this team that we’ll bounce back.”

Frye was happy with the way his defense played — Centre allowed 199 rushing yards and 182 passing yards and recovered one fumble.

“Our defense played well but Berry is good,” he said. “They got us on some big plays. The big thing that killed us was our turnovers, especially getting in the red zone. You’ve got to come out with something. That was hard. But our kids battled back, battled back and that was the best part. I was proud of them.”

Centre is now tied for third at 1-1 in the SAA. Berry and Millsaps are the only remaining undefeated teams at 2-0, and the two teams will play on Oct. 20.

Last season’s 9-1 Centre team didn’t quite make the NCAA tournament, but there’s still a real chance that the Colonels get there this year.

“I told this to the team, their coach said this, no one is going to go undefeated in this conference,” Frye said. “It will come down to us playing one game at a time and let the chips fall where they may. Really, I hope Berry continues, I’d like to see them lose but if they don’t, we’ll hope to come after that with one loss in overtime and then we’ll get into the playoffs. We’ve just got to take it one game at a time, that’s what we try to teach them and that’s what we’ve got to do.”