BCTC Danville A rendering released by Bluegrass Community and Technical College in Danville shows what an advanced manufacturing center facility might look like.

“We have been fundraising for over a year and it’s time to break ground. And we cannot break ground until we have the other $300,000,” said Erin Tipton, director of the Danville campus.

Tipton said BCTC has collected enough in donations from local governments, industries and individuals that it has begun the process of hiring an architect for the new facility.

But BCTC must raise a total of $1 million in local matching funds in order to take advantage of more than a $2.7 million grant it was awarded in February 2017.

“The longer it takes us to raise the remaining $300,000, the longer it will take for that to be a reality in our community,” Tipton said.

Tipton and other community leaders recently toured a facility at the BCTC campus in Georgetown that is very similar to what would be built in Danville. Ben Nelson, chair of the Danville-Boyle County Economic Development Partnership, said what he saw at the Georgetown facility was “phenomenal.”

“What they’ve got going on is very impressive,” he said. “… Holy moly, Batman — if we don’t come up with the $300,000, shame on us. If we don’t make this happen — it is the single biggest thing we can do (for workforce and economic development in Boyle County).” 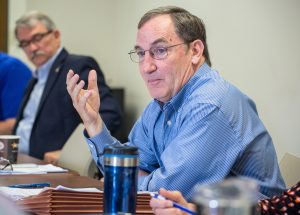 Ben Kleppinger/ben.kleppinger@amnews.com
Alan Turbyfil, treasurer for the Boyle County Industrial Foundation and the Danville-Boyle County Economic Development Partnership, said building a new advanced manufacturing center at the Danville campus of Bluegrass Community and Technical College would be “huge for this community.”

Right now, BCTC Danville can produce about 38 graduates in the high-demand areas, said Alan Turbyfil, a member of the Boyle County Industrial Foundation. The expansion would include specialized facilities and allow the campus to produce about 76 graduates every year.

“That’s huge for this community,” he said. “That’s 76-plus highly skilled people that can go into our factories and start with a great job, great benefits. And it’s also a huge recruiting tool — having those … people being trained here is the biggest recruiting tool we have for industrial prospects.”

Tipton said to date, Boyle County, the City of Danville and the Industrial Foundation are the largest contributors to the local matching funds. But many local industries and industrial groups, including from surrounding counties, have donated because they recognize the value of the project and their own need for well-trained employees, she explained.

Nelson said he would like to see the EDP become a donor to the project in order to send a message about the importance of it for economic development.

“I think the symbolism of the full partnership making a gift is important,” he said.

Nelson has encouraged the EDP’s board to look at its budget and consider what might be cut so that money could be given for the BCTC project instead.

Tipton said she is still waiting to hear back from some private donors and manufacturing partners. She would like to complete the fundraising by Dec. 1, in order to stay on-track for breaking ground in the spring of 2019.

Nelson said if BCTC is successful, the space currently used on the campus for the 38-graduate program would then be freed up for the college to offer other opportunities. He suggested as an example that the space could be used for programs that develop the health-care workforce, given the presence of Ephraim McDowell Health in the region.

“It’s got a ripple effect that is big,” he said.

The state grant funding is coming from the much-publicized $100 million Kentucky Work Ready Skills Initiative that was launched by Gov. Matt Bevin in July 2016.

In December, BCTC decreased the amount it was requesting to $4.5 million, and in February, the state awarded it $2.736 million.

Asked if there’s a deadline by which BCTC must reach its fundraising goal or lose the grant, Tipton said the state hasn’t yet told her of any deadline.