A street fight in Junction: Mayor, council at odds with developer over questionable plat filing 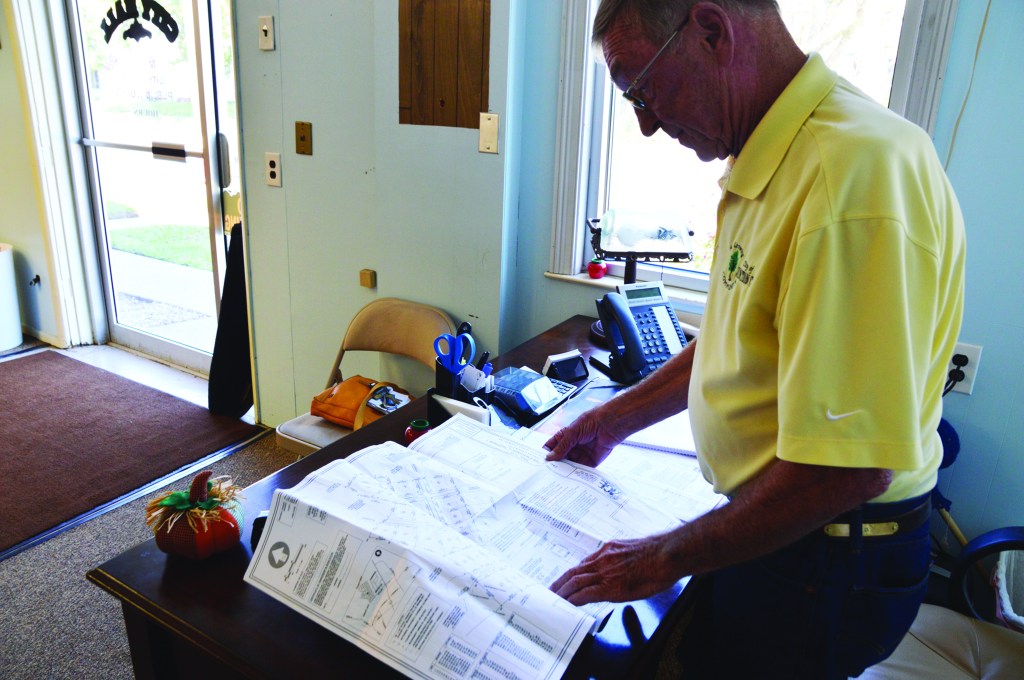 Bobbie Curd/bobbie.curd@amnews.com Junction City Mayor Jim Douglas shows the original plat brought to him by developer Tom Hensley, which shows the signature box required by Junction before it can be filed in the clerk's office as a plat. He says the plat was not approved by the city, but was filed anyway after it was revised, with the signature box taken off of it.

The mayor and council of Junction City are crying foul about a recent plat from a local developer that was accepted by the county clerk’s office. But since Junction City is in the unique position of having removed itself from the Danville-Boyle County Planning and Zoning Commission’s authority, no one knows what the next legal step is.

At a past city council meeting, Junction discussed the plat that had been brought before it by developer and attorney Tom Hensley for newly added streets to the Shelby Green neighborhood he’s developed off of U.S. 127 South. Eventually, they found out the plat had somehow been filed without the approval signature it needed from Junction City, and without certifying the streets in question are 20 feet wide. They say they actually measure 19 feet wide.

The streets are in the back of the subdivision with roughly 37 lots parceled off. Apparently several of them have already been sold and have building permits pending for homes. However, since the issue has been discovered, Mayor Jim Douglas said the issuance of building permits has been stopped.

The council discussed what its next move would be — since the plat wasn’t approved by Junction City, the council says the streets will not be accepted into the city, meaning residents won’t receive the same services as the rest of the neighborhood. Council members said they hated for the residents to have to suffer for a developer’s issue, but since they felt Hensley wasn’t being straightforward about the plat, they didn’t know of any other way to handle it. 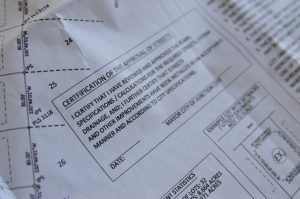 Bobbie Curd/bcurd@amnews.com
The original plat Mayor Jim Douglas has shows the box required for Junction City’s signature; the filed plat did not have this box.

Douglas showed the original plat brought to him, which includes a box with a signature line for the approval of Junction City. The plat that was filed in the county clerk’s office does not have that box on it. It also states at the top that the signers verify the streets meet the 20-feet requirement. It is signed by Hensley and his engineer, Luther Galloway.

Steve Hunter, director of P&Z, says this is an unprecedented event due to Junction having left the P&Z Commission. He said P&Z requires developers to put down bonds, which are then cashed in situations where the commission has to complete something a developer didn’t do, or if P&Z has to correct an issue if the developer won’t. But now Junction operates on its own ordinance, regulations and sub-regulations, he said.

Jeff Jones, Junction City’s attorney, was asked during its last meeting how to handle the situation. He told the mayor and council he had no idea what the next move would be, or if a move was even required by the city since the plat was incorrect. When contacted by phone later, he said he couldn’t legally advise on the matter because the city had not asked him to.

“I’m there to answer questions to the city and advise them on what they bring to me. They haven’t asked me to do anything with this,” Jones said.

Different attorneys would speak to the matter, but did not want to go on record since they didn’t have all of the information. The general consensus has been it is the developer’s responsibility that what is verified on the plat is correct, but no one could explain how the plat was able to be filed without Junction’s signature, if that’s the process that has been put in place since the city left P&Z; or what the next step would be.

Boyle County Clerk Trille Bottom also said yes — it’s a unique situation because Junction is not within P&Z’s authority. She said when developers bring in a plat to their office, they check to make sure each box is checked and signed — they are usually numerous ones. However, employee Becky Webb said they did reach out to an engineer for advice after accepting the plats in question because they hadn’t gotten plats for Junction City property in some time. They asked what the exact requirements were, and were told they do need a signature by the Junction mayor for approval.

“Most of the time, when a plat comes over, it’s already approved by P&Z, so we’re just checking to make sure each box is checked and signed and giving it a number,” Bottom said. Bottom and Webb said the Junction council can approve the plat to be revoked and — through their attorney — file a letter of revocation in the clerk’s office, which would be placed in the file with the plat.

“That would mean it’s not a legal plat if the city has revoked it,” Bottom said. Both Webb and Bottom were perplexed that the original plat shows a box where the Junction mayor is required to sign, but what was filed — which is legally required to be the original copy of the plat — did not have the box on it.

Why a foot matters

As the council discussed during a prior meeting why and how the plat was filed without its approval, city council member Sonya Kitchen said she measured the new roads herself to find they were only 19 feet wide. She also measured the city fire truck, “from mirror-to-mirror, and it’s a little over 10-feet wide,” she said. “There’s no way a vehicle could pass an emergency vehicle on that road.”

Kitchen also measured the roads in the part of the neighborhood that are already built, and they are 24 feet, 4 inches wide — “A big difference from the new part that’s been started,” she said.

Douglas recalled when Hensley brought the plat to him for his signature. “…But I can’t sign off on something I didn’t know to be true. He got a little sideways with me when I wouldn’t sign it. He accused me of doing it for personal gain, because I’ve got a subdivision in Junction. But that’s not true.”

Douglas and Hensley have had a contentious relationship at best, and are well known to butt heads over development in Junction. Douglas admits they “don’t get along, but developers in Junction City are all expected to meet the same regulations. We can’t force the others to do it and not expect him to do the same thing. And I wasn’t going to sign off on a false document. But he got it filed anyway. And he sent me a letter threatening a lawsuit over it.”

The letter mailed to Douglas is typed on letterhead from Hensley and Smith, Attorneys at Law. It reads exactly as printed below:

“Please be advised that I have been retained by Shelby Green LTD, A Kentucky Corporation, to represent it. After reviewing the minutes of the City Council Meeting on July 12, 2018, a complete study of your proported subdivision ordinance and the inspection of a plat filed by you and your wife on August 7, 2017 (record number) in the Office of the Clerk of the Boyle County Court, I have advised Shelby Green to record its Plat and Restrictions for Shelby Green Phase II in said Clerk’s Office, and to convey lots.

“If in the future you interfere with the lawful Business of Shelby Green, LTD, lot owners, homeowners, contractors, home builders, doing business in the City of Junction, Shelby Green, LTD, will file a Civil Action in the U.S. Federal Court for the Eastern District of Kentucky.

“I would hope that you would heed this message for your sake and for the benefit of Junction City.”

According to the Kentucky Secretary of State’s office, Shelby Green LTD, which Hensley states he is representing in the letter, lists Hensley as vice president and Floyd Van Cook as president and director. However, it’s listed as an inactive corporation with “bad” standing. A certificate of dissolution from the Secretary of State says the company was dissolved Oct. 9, 2017, because it did not file its 2017 annual report “within 60 days after it was due.” A representative from the secretary of state’s office said the agency’s information on the company is up-to-date and correct.

Douglas said he is unsure why Hensley listed the specific plat in the letter. “I have a development off White Oak road, called Huntington Creek. It initially opened up in one phase, but we were put under a sewer sanction years back, so I made two sections out of it.”

Douglas said he had only the front section approved, which is about 12 or so lots. “Then last year, I had someone who wanted some lots in the back, so I opened the rest of them up. I went to the courthouse to file it, but the engineer’s signature wasn’t on it, so I had to go and get that before I could record it. But after that, it had been signed off on by everyone and is legal. I don’t know why that plat was listed; it doesn’t have anything to do with this situation.”

Douglas also received a call from the Division of Housing with the state. He was told Hensley and two others filed a grievance against him. “Apparently, they said I am holding up the construction of houses out there because we won’t issue a building permit. But the streets aren’t approved,” and as far as he’s concerned, the plat is illegal, he said.

Douglas said he was told by the Division of Housing that it is “a zoning issue, not housing.”

P&Z Director Hunter, who previously worked as head of the planning commission for Warren County and Bowling Green, said he has never encountered a situation like this before.

“I think it would be to Junction City’s benefit to join back up with us, and this is a perfect example of why,” he said.

Douglas said the council would consider doing that.

“It’s a different commission since Hunter is there,” he said. “I like the way he handles things, and he seems fair.”

Hunter said if Junction were to rejoin, the change would have to be approved by the other parties under the commission’s umbrella: Boyle County, Perryville and Danville.

Hensley was reached by phone, but said he “could not speak to this at this time,” and gave no comment.

Douglas says he will attempt to get his city attorney involved again, but may wind up contacting the Kentucky League of Cities to get advice.

Before deadline, Douglas called to say city attorney Jones has now advised that he will send a letter to Hensley to refile an adjusted plat to show the streets are 19 feet, and the adjusted plat will be taken before city council to be voted on for approval.