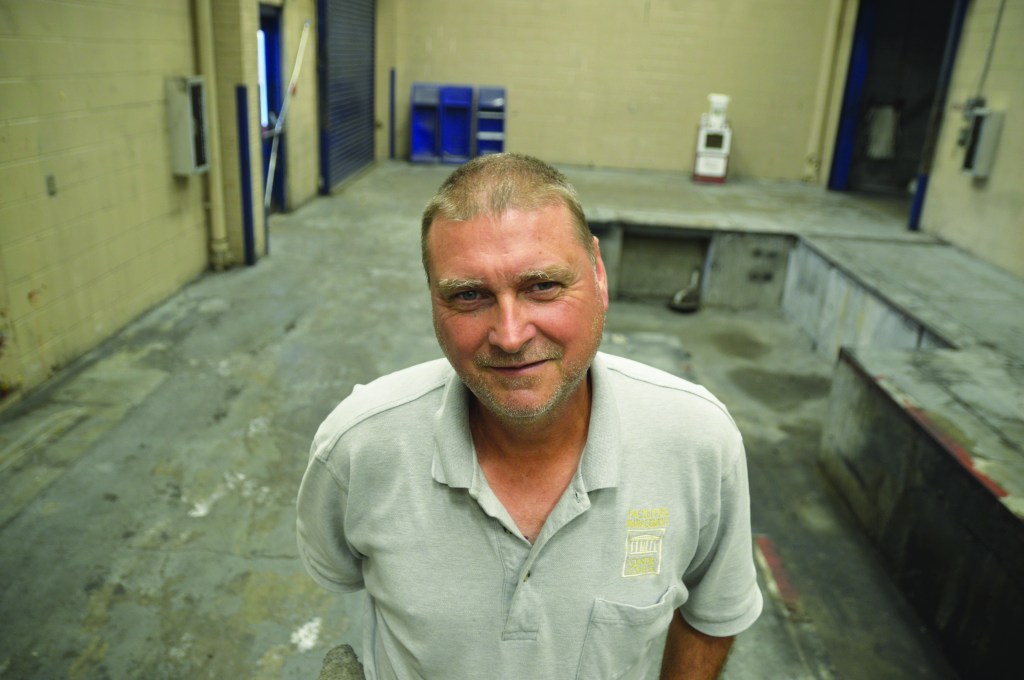 Bobbie Curd/bobbie.curd@amnews.com Steve Curtsinger stands in the empty press room at The Advocate-Messenger. He says the worst part of his job was seeing changes at the newspaper, over the years, as the business’ footprint shrunk.

Steve Curtsinger has been a fixture at The Advocate-Messenger for many years now. He quietly comes on the job in the evenings, after he’s finished with his regular job as a groundskeeper for Centre College, where he’s been for almost 16 years now.

Although he was born in Indiana, Steve says don’t let that fool you — his dad may have married an Indiana woman, but he moved his family to Garrard County when Steve was 7.

“I don’t like saying I am a Hoosier — I’m blue-blooded, all the way, always for UK!” Steve says his blood might be red, but it’s “blue, blue, blue.”

Mondays, Wednesdays and Fridays at Centre, he does trash pick up all around the grounds. How much just depends on what’s going on. “A football game? Lots. But normally, the kids are nice about that. They usually pick it up themselves. But every once in a while, you gotta let the dog out, and kids will be kids.” 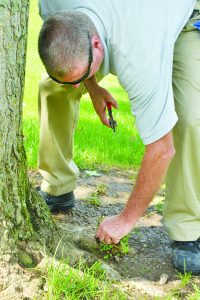 Robin Hart/ robin.hart@amnews.com
Curtsinger bends down to weed around the base of a tree on the grounds of Centre college , where he is employed as a groundskeeper for almost 16 years.

Over the years there, he’s seen many kids bend over and pick up trash in front of him, and make the comment to him “I don’t know why they threw that on the ground…”

He says when they see someone else liter, they’ll usually apologize to Steve for even having to pick it up. “I tell them don’t worry — kids are kids. And it keeps me in a job,” Steve says, then his trademark giggle pops in. Steve is always laughing.

“But the kids are outstanding. I’ve been driving around before in my car and seen adults throw things out their car window. I don’t know why people do that. It’s just the American way, I guess.”

But the Centre kids are always nice, he says — he’s never had one be rude to him. They come up to him when he’s eating out or at the grocery store, “They say ‘I know you!’”

He starts regular days at 7:30 every morning, and gets off around 4 p.m. Then he comes to The Advocate on Wednesdays, Saturdays and Sundays, which he’s been doing for almost two decades now. He sweeps, washes the windows, makes sure the tables are clear, cleans everything, makes sure the coffee pot and lights are off, takes out the trash and recycling, mops, vacuums …

He says there’s really no worst part of his job, overall. “When I come to work here, it’s like a picnic. I was working seven days a week before I came on at Centre, from 5 or 6 in the morning to 9 at night. This working five days a week is like standing on my head — you never get tired of it. I enjoy it.”

Steve has worked all his life, from the time he was 7 years old. “We worked on the farm. Hard work comes natural to me. The work ethics — Daddy beat it into us. I mean, not literally. But he said if you ever want to have anything or do anything in life, you have to work. And we took it literally. And if you say you’re going to do something, do it. Always keep your promises.” His dad died in the 90’s. He calls his mom “the rock of our family. She’ll be 90 on Oct. 2.”

The best part of his job he says is working with the people at the Grounds Shop — “There’s Mike, Monty, Danny, Aaron, Kurt …

“And Mrs. Roush, John Roush — they are great people. I can’t explain it, they’re not like your bosses. They feel like everyday people to me. They have to make people walk the line every now and then, who aren’t pulling their weight, but bosses have to do that. They’re good to me.”

Steve can’t really think of the hardest part of his job, at first. Then he says, “I take that back. I think the hardest thing is at the paper, seeing all the people I used to work with gone now. And I walk in here, look down at that pressroom, and it’s empty. My heart drops out. I understand, they had to do it, but it’s a shame.”

But all in all, Steve says he wouldn’t change a thing about his job.

“I knew when I signed up to do ground work, I wasn’t going to get rich. I don’t care about the money, as long as I’m happy when I work. I like getting paid, and I need it, but money is money. Friends and life go hand-in-hand. If you got good friends where you work and a good family, money doesn’t matter.”

Bobbie Curd/bobbie.curd@amnews.com Steve normally slips in and out of The Advocate’s offices without being seen or heard, unless he stops to maake a coment about the UK Cats or laugh at a joke. Here, he puills the recyclables to be taken to the back dock.

Bobbie Curd/bobbie.curd@amnews.comSteve talks about the “good’ole days at The Advocate, when many more people worked at the newspaper.

Robin Hart/robin.hart@amnews.com Curtsinger bends down to weed around the base of a tree on the grounds of Centre College, where he has worked as a groundskeeper for almost 16 years.

Bobbie Curd/bobbie.curd@amnews.com Steve deposits the recycled newspapers into the container at the back of The Advocate building.