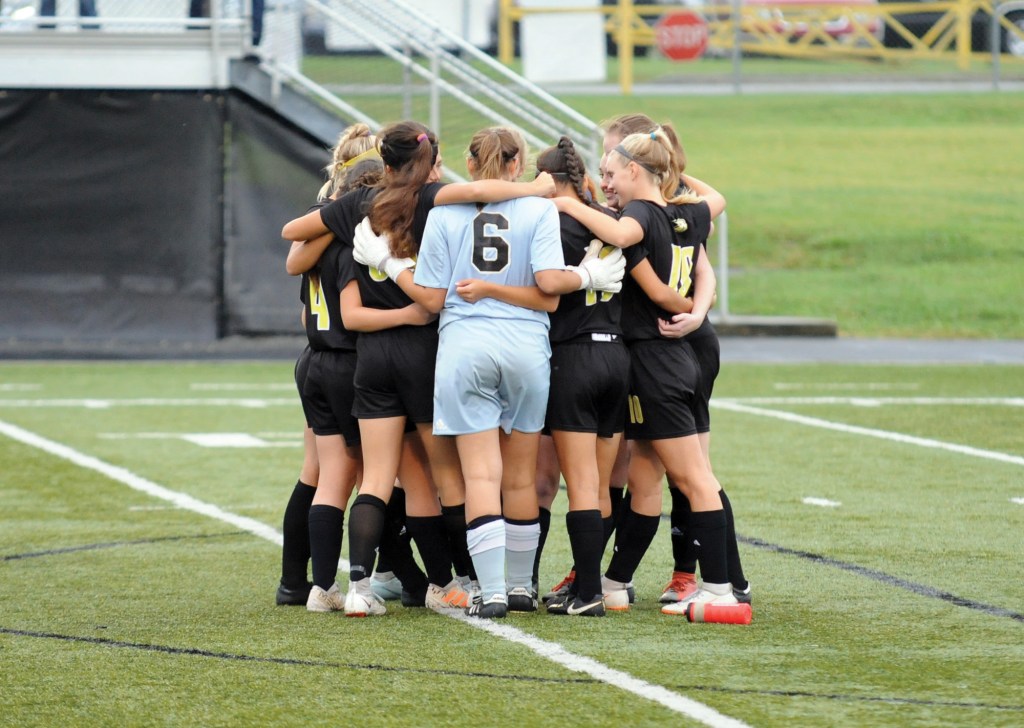 Boyle County girls soccer has played one of the toughest schedules in the state.

The Rebels go out with a bang this week. After visiting No. 34 Lexington Christian on Tuesday, Boyle will host No. 4 Assumption on Thursday and No. 6 Lexington Catholic on Saturday.

The Rebels were 8-7 entering Tuesday’s contest and, even with the losses, players say they know they are improving.

“I feel like we have improved from the beginning of the season, we’ve done really well,” senior Lindsey Wren said. “We’ve played more as a team, we’re hustling more and we’re doing well.”

Head coach Brian Deem said he liked the way his team came out in the Spine Center Showcase — Boyle’s tournament last week — in victories over North Laurel and particularly against Oldham County. But Saturday’s game against Dunbar was a huge challenge.

“I think the game Wednesday night with Oldham County was a great game,” Deem said. “We worked hard tonight against Dunbar, they just flat out whipped us. No if ands or buts about that. They anticipated better, they were more physical. That happens when you’re on your heels, you’re going to be in trouble. That’s just something we’ve got to go back to work on and get us ready for next week.”

Last week’s games were the first that Boyle has played at home all season, and the Rebels will have three more this season.

“We’re finally home, that feels really good. To come home, it feels good and I think we responded well in our first two games,” senior Nicole Mingey said. “They were a battle, both teams were really good. Every game we’re just trying to get better so we can prepare for postseason. I definitely think we have shown improvement. I think it’s going to be a good week and we can learn from the experience, go on and perform well.”

Deem said Mingey has been a key cog in the team, stepping up as a central midfielder from her defensive position last year.

“Nicole Mingey has been doing a heck of a job,” he said. “Lindsey Warriner and Hailey Cannon have been doing really well. In the past couple of weeks, Abby Carter and Chelsea Elmore, my seniors are coming. This is a work in progress and I’ve told them, you’ve got to buy into the process. You’ve got a season, it’s a process, it’s about the end result, not the road bumps during the way. Where we are now is much better than where we were three weeks ago. We’re getting better at it.”

Cannon has stepped in as a leader on the defensive back line after Mingey’s promotion to midfield.

“I think Hailey Cannon has really stepped up,” Mingey said. “She was in the back with me last year so I know how she plays, but since I’ve been moved up to the midfield she’s been holding it down. I’ve been really proud of her, she’s stepping to the ball and she’s showing good leadership. She’s just been doing a really good job.”

Carter had a season-ending injury last season but is back better than ever, Wren said.

“AC has been doing really good coming back from an ACL surgery, she’s been hustling, playing fast and that’s what we need,” Wren said.

The Rebels will have the top seed in the 45th District, where they’ll face Garrard County in round one and Danville or Lincoln County in the district championship.

After that, it’s on to the 12th Region, where Boyle County and West Jessamine have been mainstays at the top. The Colts have won the past two meetings (and region titles), Boyle last won in 2015.

Wren agreed and said that day-to-day improvement is the focus through the end of the season.

It might be nice for the Rebels to have a 15-0 record, but the players know that better competition better prepares the team for a challenge in the postseason. As of this week’s rankings, Boyle has played or is scheduled to play five of the top seven teams in the state.

“Some parts of me are like, ‘oh, I want to win by a lot,’” Mingey said “But we’re never going to get better if we don’t play teams like Assumption or Sacred Heart. So playing these brutal teams and tough teams are going to prepare us more for postseason, we’re playing teams that we’d play in postseason.”