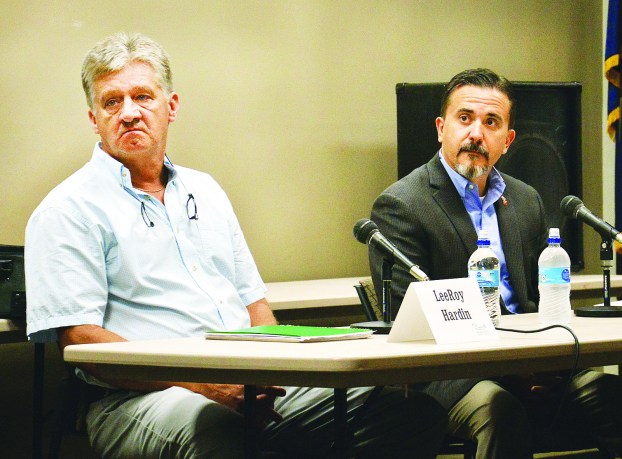 Robin Hart/robin.hart@amnews.com Candidates for Boyle County Jailer, LeeRoy Hardin (R), left, and Brian Wofford (R) listen to a question during a public forum Tuesday night. Hardin once was Boyle County Sheriff and Wofford has been deputy jailer for the past four years.

Overcrowding at the local jail and its effects came up numerous times during a forum for Boyle County jailer candidates Tuesday night.

LeeRoy Hardin (R) and Brian Wofford (D) both talked about how they think they can help solve the problem. Both think rehabilitation for inmates with drug problems is part of the answer.

Hardin said he feels even if two inmates are rehabilitated and released, law enforcement brings in five more.

“You can’t stop bringing them in. You’ve got to get them off the streets,” he said. “Yes treatment will work, but if they don’t want the treatment, you can’t force it on them.”

Hardin also believes the jailer should be able to transport prisoners from the jail to where they need to go without having to call and wait for an officer from the sheriff’s department to move them. For example, if an inmate needs to be transported to Eastern State Hospital, “move them yourself and go with that … You have a cruiser out there.” This would open up a bed more quickly, Hardin said.

Hardin said an effect of overcrowding is that “it’s going to put your deputies in harm’s way … It’s a safety issue that needs to be addressed.”

Wofford said overcrowding at the jail can be lessened if more programs are put into place for the treatment of addictions. “I’m a big advocate on treatment because treatment works” to keep people out of jail, he said. “We’re locking up too many people we’re mad at instead of locking up the people we’re scared of.”

Wofford believes most of the inmates who are convicted on drug trafficking charges are really just dealing enough to feed their own habits and would benefit the most if they could receive proper treatment to break out of the cycle.

But “big time dealers” need to go to jail, he said.

Wofford, who currently works as chief deputy jailer, said overcrowding isn’t just a safety issue for the staff but for the inmates too. He said when there are that many people in a small space, illnesses can quickly spread. The jail has a plan to contain sicknesses from spreading, which includes cleaning and disinfecting floors, walls and door knobs. “But a jailer can only do with what he has inside those walls,” Wofford said.

The jail has a commissary where inmates can purchase candy and toiletries from money deposited into their account from a family member or friends. However, the jail keeps 50 percent of every deposit. “I will not continue that,” Hardin said.

Some people are struggling to come up with even $20 to deposit into an inmate’s account, Hardin said. “I don’t understand why you take half the money.” He said he thinks inmates should be able to keep and spend all of the money put into their account.

However, if any funds are left over when the inmate is released, then the jail could keep that, Hardin said.

Inmates are also charged per minute plus tax for each phone call made. Hardin said, “I don’t know what they’re doing inside the jail. And I can’t get access inside of the jail to find out what’s going on. Looks like you’re paying for everything. To me, you’re double-taxing the taxpayers.”

Hardin said he wants enough staff to be able to “take care of any situation.” He said fiscal court may not have enough money to increase the jail’s staffing but, “I’m against raising taxes, but that’s what it may take.”

He said many times, an ex-inmate can’t find a job because of their record, then they can’t pay their fines, so they end up back in jail.

He said the jailer deals with three types of people: inmates and their families; taxpayers; and the jail staff. Hardin said he wants to work with everyone to “do the right thing; take care of people.”

Explaining how the commissary works, Wofford said fiscal court set the 50 percent kept from every inmate’s account. It’s not to show profit, he said, Instead, the money is used to help pay for inmates’ medications, hospital costs and doctor visits. “That money doesn’t go for anything but to help pay their bill … If fiscal court did not take that money, they would have to raise your taxes,” Wofford said.

The jail provides three hot meals a day, toiletries, clothing and laundry services. Inmates only use the commissary for extra things like candy and e-cigarettes, Wofford said.

Having to pay for telephone calls, Wofford said, allows the jail to use a better video system now. An inmate’s parents who live out of town or out of state, can now visit with the inmate via video on tablets and cell phones. Some inmates break these devices so the cost of using them incorporates replacement costs and maintenance.

“Anything in this world that we do, it costs money. And just because you’re in jail doesn’t mean your liberated from having to pay your way through,” Wofford said.

Wofford said the recent jail study showed that the facility needs four more employees. However, the same study gave credit to the management style and training of deputies that has allowed the jail to not have had any major problems. “According to them, we’re doing a pretty good job.”

However, Wofford believes the facility itself can and will be improved. The building runs and operates 24/7, Wofford said, “and everything is going down” in the aging facility, including the wiring, doors and door locks that don’t function properly. There aren’t enough cameras and not enough staff, he said.

“The building is inadequate,” Wofford said.

Solutions fiscal court may consider would be to build a new jail or expand where they are now, Wofford said.

The jail’s annual budget is $5 million, with 47 employees; they have 220 beds and served more than one-half million meals in 2017. Also, inmates arrive at the jail with AIDS, Hepatitis C and MRSA. Many are mentally ill and several need dialysis. Eastern State Hospital is not accepting any patients if they’ve been charged with a felony, Wofford said.

There are a lot of moving parts to running a jail, Wofford said. Plus the building is old and changes may be on the way. “I understand what needs to take place.”

A street fight in Junction: Mayor, council at odds with developer over questionable plat filing

The mayor and council of Junction City are crying foul about a recent plat from a local developer that was... read more