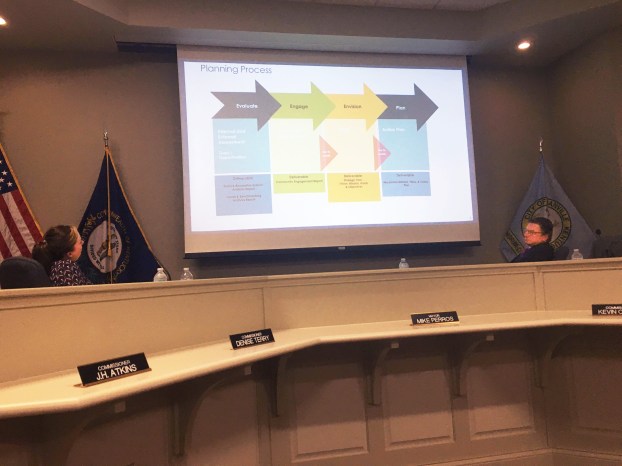 Bobbie Curd/bobbie.curd@amnews.com Mayor Mike Perros, right, and the Danville City Commission take in the summary results of the master parks study plan, presented Monday night during its regular meeting. The commission took no action since it was a draft, and said further meetings will be set up to discuss working their way through the full action plan.

Danville City Commission received the “executive summary” of the master parks plan Friday, an in-depth, 200-plus-page document outlining not only community input and wish lists for the parks system and the funding needed to pursue it, but reviewing existing conditions as well. Monday night, consultant Pat Hoagland with Brandstetter Carroll went over a synopsis of the key findings from the research with the commission. Potential expenses associated with the action plan were not released.

“I would not give you a very good grade on existing conditions of some of the facilities,” Hoagland said.

While showing photos taken of area parks, he listed playgrounds with no safety surfacing; backstops that haven’t been used in some time; cracks on areas that were once tennis courts now used for other activities; basketball courts with grass growing in them — “issues like that need to be addressed,” he said.

Another key point Hoagland said was the strong emphasis the stakeholder groups involved in the study put on “having a single governmental department to maintain and program all parks in Danville, at a central location in a park to improve coordination. Right now, you’ve got the city, county, Parks & Rec, all doing programming and maintenance, and it doesn’t make sense.”

“The community visits the ones with the most facilities,” Hoagland said.

Responses stated desires to have more summer concerts within the parks and other types of activities to bring the community together.

The most mentioned need in the “upgrades” area is newer or improved restrooms, but “that’s always No. 1 all over the country,” Hoagland said.

The second-highest need was walking/hiking trails — also par for the course in most surveys, he said. Other top priorities of respondents included security cameras and wifi in the parks, and more playgrounds or better maintenance of existing ones.

Other key points included the benchmarking results to compare the system not only to 44 cities with populations between 10,000-50,000 in the southeast U.S., but also to nationwide systems, including 950 agencies.

Hoagland said the community has more park land per thousand residents than both the benchmark and the national comparisons, but most of that land is in Millennium Park, “not spread out very well to serve the community.” 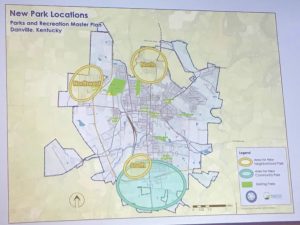 As far as monetary investment in parks, “your budget is lowering, and you have both lower operating expenditures per capita — $51 per person versus $62 and $77 (benchmark and national) … much lower if you start looking at the county residents, which you serve through your facilities as well.”

Hoagland said spending per acre is also lower than the benchmark, “by quite a bit in terms of expenditures for the programs.“ The capital budget is lower than the average as well, “and also lower, again, if you look at the county residents.”

Many respondents said park facilities need more care and upkeep, including the need to replace the Bunny Davis swimming pool. One of the top additions desired was a family aquatic center, which Hoagland said came up continuously throughout surveys and focus groups.

The data also show a strong desire to develop new neighborhood parks in underserved areas, as well as a new community park in the southern part of the city. “There are no specific sites identified for these. If the Bunny Davis center closes, you can build a new family aquatic center over in or adjacent at Millennium Park or in the fairgrounds,” Hoagland said, and added that areas of the north and south have major gaps that aren’t served very well.

Mayor Mike Perros asked Hoagland if he ran across anything surprising in the outcome of the study; he said not really.

“Just the different agencies managing several different parks in the community and the overlap in services,” Hoagland said.

“Where would you say we excel?” Perros asked.

“Millennium is a wonderful park,” Hoagland responded. “Weisiger (Park in front of the courthouse) is a great place to bring people downtown. You have some good spaces, but they need to be brought up-to-speed with some investments. Not just one time … you need additional maintenance and staff in the budget so it can all be maintained.”

A group of elected officials, school and athletic representatives and others was formed for input as part of the study. Hoagland said the need for more coordinated services between Danville, Boyle County and the Parks & Rec board was again a big priority.

Improved customer service came up as a big need, with online registration and an improved website to make it easier and more convenient for families to register.

Commissioner Denise Terry asked to clarify — “We don’t have online registration for programming?”

Hoagland said no, registrees must go to Bunny Davis or to the site where the programming is held to register now, which is behind the times. He said it’s pretty standard across the nation to have online capabilities for registration. 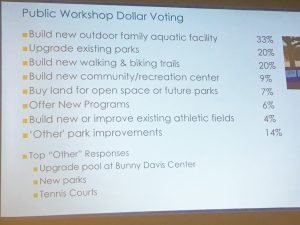 Bobbie Curd/bobbie.curd@amnews.com
Results were given from a public workshop held to gain input for a master parks plan, part of Brandstetter Carroll’s presentation to Danville City Commission on Monday night.

“And more programming opportunities and marketing needs, which is a struggle for most Parks & Recs, just getting the word out to let them know what you’ve got,” he said. As well as creating more connectivity between the parks and neighborhoods via trails, better lighting and several other needs.

Commissioner Kevin Caudill commented that actions take dollars, and asked if the assessments are included in the executive summary.

“Yes, but a lot on the action plan don’t take any money,” Hoagland said. He said quite a few elements are included as plans that don’t cost, such as “management operations kind of things. But to do it right, yes — you need additional staff.”

“I would suggest we plan a series of meetings — with no executive sessions attached — to review and discuss with in more detail with staff,” Commissioner J.H. Atkins said. He said he can see the plan being discussed “with fiscal court and the city coming together to … walk our way through this … And I’d like to see the executive summary posted on our website so we can again gather some more community input from stakeholders, employees and everyone else who has a vested interest.”

Atkins said the next steps should be continuing to work on the report and “put together a plan of action, either with fiscal court or with the city.”

Perros asked for “a little time on that and let’s come back to it.”

• Of the park facilities visited over the past year, 99 percent of survey respondents said they had been to Millennium Park; 78 percent to Constitution Square Historical Site; 55 percent to the Community Arts Center; 53 percent to McDowell Wellness Center; 42 percent to Weisiger Park; and 41 percent to Bunny Davis.

• Restoration of natural areas at existing parks was touched on, and Hoagland said he thought the original master park plan for Millennium showed “quite a bit to be a natural meadow so you wouldn’t have to mow it all the time. There’s a little area out there, but more could be done.”

• Improvement of ADA (Americans with Disabilities Act) access was a systemwide recommendation, which Hoagland said “was supposed to have been done by 2012, or at least have had a plan in action by then.”

• Millennium Park’s master plan is in need of an evaluation and a clear goal, including a feasibility study for an aquatic center and possible acquisition of the fairgrounds.

• An increase in the Parks & Rec capital and operating budgets was recommended to be more in-line with other communities.

• Implementing the Danville/Boyle Pathways and Trails Master Plan was recommended.

• Partnerships were recommended to be sought out with for opportunities to promote tourism and improve access to recreation facilities and programs.