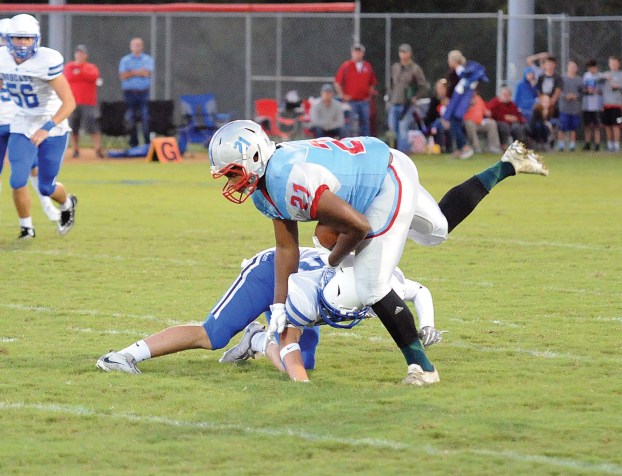 The Bobcats went on the road and controlled the line of scrimmage in a convincing 44-13 victory over the Rebels.

It’s the first loss of the season for Casey County (5-1, 1-1), and head coach Steve Stonebraker said that it was a dominant display from the visitors on the line of scrimmage.

“They did a better job blocking and tackling than we did, that’s what it came down to,” he said. “That will do you in almost every time.  You’ve got to give Bell County credit for dominating the line of scrimmage and tackling so well on defense.”

Bell County entered Friday’s game with the least points allowed in Class 3A. That defense would be tough for the Rebels to crack. Offensively, the Bobcats took care of business early in the game.

Bell had three rushing touchdowns and one through the air in the first half and converted every two-point conversion, taking a 32-6 lead into halftime. The Bobcats’ first possession was entirely running plays until quarterback Logan Stephney found Jason Jones in the back of the end zone for an 11-yard score.

Casey would get on the board in the second quarter with a pass from wide receiver Reece Brown to Zach Todd from six yards away. Brown took a handoff and Todd made a grab at the one yard line before barrelling into the end zone.

At halftime, Stonebraker said he and his coaches challenged their team.

Casey’s defense stepped up, allowing 12 points in the final 24 minutes, but the Rebels’ offense couldn’t generate points. Bell enacted a running clock with 11:17 left in the fourth quarter. After the score, the Bobcats recovered an onside kick and worked more time off the clock.

Brown would again throw a touchdown pass on another trick play — this time to Micah Pendleton — for the final score of the game.

“Reece Brown would be the guy who stands out at free safety,” Stonebraker said. “He made a ton of tackles tonight and I thought he got his feet in position to make a lot of plays for us.”

Brown finished with nine tackles, had two catches for 39 yards and threw for two scores.

Star running back Preston Tucker, who missed last week with a hip injury, was back but not at 100 percent against Bell. He finished with nine runs for 47 yards and had one catch for five yards.

It’s the first loss of the year for Casey but Stonebraker said there’s plenty of time for his team to rebound.

“Sometimes when you play in a tough district this is going to happen,” he said. “We definitely didn’t play our best game tonight and Bell County played awfully well.  They were able to control the game by controlling the line of scrimmage.

“There’s a lot of season left. One game can’t define your season. We’ve got to put this game behind us and move forward, the good thing now is these guys realize that there’s room for improvement. We’ve got to get better. We’ll have some specific things that everybody can get better with and that’s what we’ve got to do.”