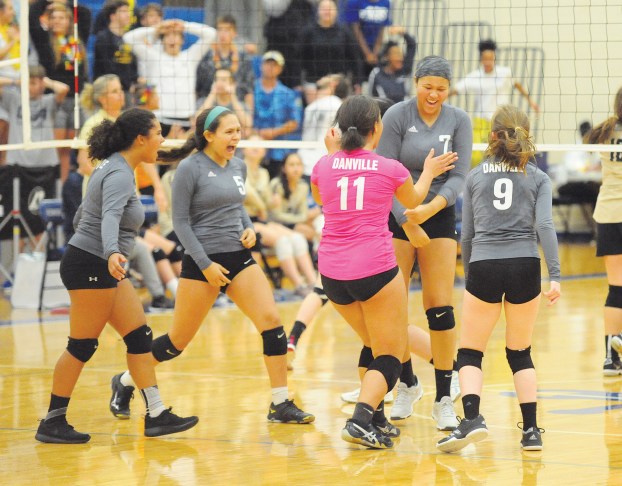 The first-ever contest between Danville and Danville Christian Academy went down to the wire.

DCA won a back-and-forth first set with a raucous crowd at their back.

“The girls came out and they were really excited to play Danville, we’re new to playing KHSAA teams,” DCA head coach Jeannie Gayle Hurst said. “We’ve played KCAA schools, but they’re excited to play against people they know. Danville and Danville Christian Academy, they’re so close to each other, they were just fired up and ready. We just fell a little short.”

After a close first set, Danville steamrolled in the second set to tie the game.

“Our second set was definitely the most powerful,” Danville assistant coach Ellen Casey said. “It was definitely the team that we’re used to seeing, but in that third and fourth set, any of our errors just got in our head and when we lost momentum, it was hard to get it back. Thankfully they came out in that fifth set ready to play and they kept momentum. I was a little bit nervous, going back into that slump, but we won.”

The two teams battled it out for the rest of the match, with the crowd hyped throughout the match.

It was the crowd that Hurst said kept her team up after the second set.

“It was a hard-fought match on both sides, everybody gave everything they had,” she said. “Everybody wanted to win. I was so proud of my school and my crowd, they were instrumental in helping the girls to stay up. Sometimes they have a tendency to get down on themselves. But they’ve got to learn to be mentally strong, recover from mistakes and move on.”

Casey said DCA came out with an intensity that was tough to match.

“I think a lot of times when you play a team that you haven’t played before, you don’t know what to expect,” Casey said. Sometimes you just don’t come out prepared for them to play aggressive.”

Hurst said she hopes her team learns from the first-ever match between DCA and another KHSAA team in the county.

“Learn from it, that’s the key to it,” she said. “In the locker room, we said ‘maybe there’s some calls that went against us, but that’s not what beat us.’ We know what we need to work on, we’ve got practice tomorrow and two games on Saturday. We’re going to work on the things that we weren’t doing like we know we should’ve been. We’ll work on them in practice. I told them, when they walk out of the locker room, they should walk out proud of themselves because they showed up and they played very well.”

Danville uses the big play to survive at Garrard County

LANCASTER — It wasn’t the way Danville expected to win, but the Admirals left Dyehouse Stadium with a victory. Garrard County... read more