For the first time, there will not be a mock Civil War battle during Perryville Battlefield’s annual commemoration. However, the public can become a Civil War soldier, talk with reenactors living in military camps, meet a movie star and, most importantly, be touched emotionally by the traumatic realities of the war that happened in Perryville on Oct. 8, 1862.

“Please don’t come expecting a battle this year,” said Joni House, Perryville Battlefield State Historic Site manager. “It’s nothing that the state is doing. And nobody is trying to stop the reenactments … It’s been coming for a long time.”

The number of Civil War reenactors are dwindling because more and more people are getting out of the hobby, House said. Tens of thousands of reenactors got into it following the release of the mini-series “The Civil War” by Ken Burns in 1990, and now, “they are aging out,” House said.

“A Civil War company is 100 men. In regiments, there are 10 of those companies,” House said. In describing just one hillside where a battle took place at Perryville, House said there were probably 15,000 soldiers “very closely compacted.” 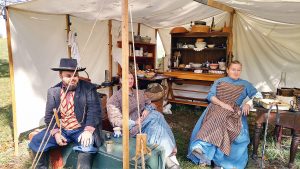 “Stand on one hill and look half a mile away,” she said. “It would have been covered with soldiers.”

“It’s ridiculous to put 50 guys on this massive battlefield and say you’re recreating the battle,” House said. “You just cannot get the grasp of that when you put 50 guys out there and say we’re going to have a Civil War battle. That’s stupid.”

So this year, Perryville Battlefield’s commemoration will be very interactive with the public.

“I’d rather do something good than half-assed,” she added.

For one thing, “Instead of coming out and watching Civil War soldiers, you can be one,” House said.

“They put you in battle lines; teach you how to drill,” House said. “Enlisted soldiers” will get a training musket and a kepi (Civil War cap) to wear. They’ll be lined up with Civil War reeanctors on both the Union and Confederate sides, who will have authentic muskets that fire blank black powder.

Then, on both days at 2 p.m. when the mock battle would took place in previous years, there will be military demonstrations including the two companies of volunteer soldiers who have completed the training.

Also, everyone who enlists will be given an envelope with the name of a real soldier who fought in the Battle of Perryville. Inside will be that individual’s persona. At the end of the program, the participant can open it and see what actually happened to the soldier who they were portraying.

“I’ve seen people get real emotional. They will open it up and this guy has died. You’ll see them tear up because then they’ve made that connection to this person. It’s not just this abstract soldier. Suddenly it’s somebody’s husband. It’s somebody’s son,” House said. “That’s hopefully what we want people to connect to. The Civil War has all kinds of issues still, politically. But when it gets down to it, there’s just this young kid — he’s away from home. He’s scared to death and people are shooting at him.

“Some of them, they didn’t understand the abstract reasons for the Civil War. They were just doing their perceived duty, and they’re 18 … Let all the modern politics go away and connect with that guy … We hope the public can connect with that.”

A second feature that will connect visitors to soldiers who fought at Perryville is a living tableau tour called “Ghost of the Battle.” It’s not a paranormal tour, but is a unique event where ticket holders will accompany a soldier through a cornfield and watch actors portraying scenes of what happened on that spot after the battle on Oct. 8.

The night of the battle 156 years ago, there was kind of an unspoken truce, House said. Soldiers from both armies searched all over the battlefield looking for their friends who were wounded or dead. “Once the fighting stopped, these men came together to tried and help the people that were suffering from the battle,” she said. “We want people to understand that when the armies left, Perryville was stuck with thousands of wounded men and mass confusion … We want to kind of give the public an idea of when the battle was over, you were still left with all of this.”

“Can you imagine having to leave the battlefield with your regiment knowing you were leaving behind your childhood friend without news if he was wounded or dead?” House asked. “And then when you get back home, his mama’s going to be looking at you and going, ‘What happened?’ That’s a heavy weight to carry. And these men carried that all of their lives. We want the public to know it’s not all just about men lining up and shooting at each other. It’s the after-effect that stayed with these men for years.”

House said the cornfield tour is a good way to show the public the dramatic trauma of the war without actually having a mock battle. “I want them to feel something, besides being entertained, because battles are not entertaining. I want them to connect on an emotional level.”

House said Perryville Battlefield does plan on having mock battles every third third year, with the next one being in 2020. “That way, maybe we can actually pull in enough people” to put on more of an impressive battle display with maybe 400 to 500 reenactors,” she said.

On Saturday, American film star and comedian Steve Zahn will be at the Friends of Perryville booth, where he will meet with visitors and promote the battlefield’s preservation efforts. Zahn is starring in the ABC TV show, “The Crossing.” Films Zahn has appeared in include “Reality Bites,” “Riding in Cars With Boys,” the first three “Diary of a Wimpy Kid” movies, “Dallas Buyers Club” and “War for the Planet of the Apes.”

Experience the Battle of Perryville as told through guided tours

Military camps will open to the public. Visitors can experience the camp life of the typical Civil War soldier. Visitors will be able to observe ration issues, mail call, pay call and drill. Demonstrations will occur throughout the day;  Perryville Battlefield Museum opens until 5 p.m.; vendors open daily until 5 p.m.

10 a.m. — School of the Soldier Opens (Sign up at information area at 9:30 a.m. and is included in park admission). This is a 4-hour interactive program where you can sign up to be a soldier and requires walking and standing for long periods. Open to adults and children; those between ages of 11-15 must be accompanied by a parent. 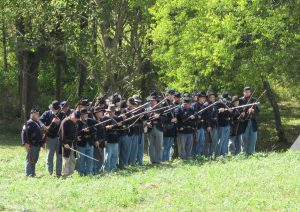 1 p.m. — Kentucky Chautauqua Performance – How I Got My Name (Big shelter)

2 p.m. — Military Demonstration (Maney’s Field). This is not a battle.

7 p.m. — Ghost of the Battle – A Living Tableau Tour (Tickets are $15 and are now on sale in museum). This is not a paranormal event.

Visit the Dye House to meet General Buckner on the front steps.

2 p.m. — Military demonstration (Maney’s Field). This is not a battle.

Visit the Dye House to meet General Buckner on the front steps.