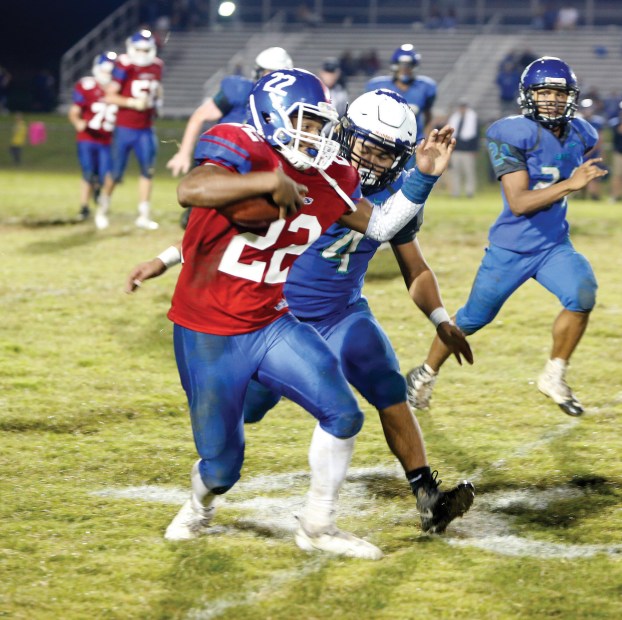 NICHOLASVILLE — It might not have been the win Mercer County wanted, but it was still the win it needed.

The Titans seemed to have their game at East Jessamine under control early in the second half Friday night, but once again they made things tough on themselves before escaping with a 29-22 victory.

Mercer led 29-6 midway through the third quarter, but its only turnover lit a fire under East Jessamine that very nearly burned the Titans.

“We keep making life tough on ourselves with turnovers. Life would be much easier if we just held onto the football,” Mercer coach David Buchanan said.

Even so, Mercer got its first regular-season win over East Jessamine in three years and its second consecutive win on the Jaguars’ field, coming on the heels of a second-round playoff victory last season.

“This has been a tough place for us to win, but now we won here in November and we won tonight, so maybe we’ve gotten it flipped,” Buchanan said.

Maybe that won’t matter. Mercer (3-4, 2-0 District 4A-5) greatly improved its chances of hosting a first-round playoff game and of winning a second consecutive district championship. If the Titans can repeat as district champs, any rematch with East Jessamine (2-5, 0-1) would be in Harrodsburg.

A 22-yard touchdown run by Malachi Yulee gave Mercer its largest lead with 6:45 left in the third quarter, but East Jessamine answered with a 16-play, 80-yard drive that produced the Jaguars’ first touchdown since their first series on a 1-yard run by Taveon Dean.

Two minutes later, the Jaguars got the ball back when Valdon Miles stripped the ball from Mercer’s Bryson Yeast, recovered it and returned it 16 yards to the Mercer 48-yard line.

That drive ended with an interception by Mercer’s Kaelin Drakeford at the goal line after, but the Titans were stopped deep in their own territory and chose to take a safety rather than punt the ball out of their own end zone, making it 29-16 with 2:13 remaining.

East Jessamine returned the ensuing free kick to the Mercer 34 and scored on the very next play on a pass from Cameron Garrett to Isaiah Williams. Mercer’s Darrian Baker blocked the extra-point attempt, keeping the margin at seven points, and after a botched onside kick attempt, the Titans got the one first down they needed to run out the clock.

“I’ve got to give East Jessamine credit,” Buchanan said. “They didn’t quit, they kept playing hard. I’ve got a lot of respect for Mike Bowlin, I think he’s a very good football coach.”

Mercer was successful on both offense and defense in the first half Friday as it built a 22-6 halftime lead.

The Titans opened the game with a 15-play, 68-yard scoring drive and went on to score on their first three possessions on a 1-yard run by Malachi Yulee and 4-yard runs by Yeast and Brayden Dunn.

The three combined for 100 rushing yards in the first half.

“We feel like we’ve got a nice O-line, our backs do a good job and our quarterback (Drakeford) does a great job of checking the offense. He calls a lot of our run game at the line of scrimmage and does a really good job with that,” Buchanan said.

East Jessamine drove down the field for a touchdown on its first possession and threatened again in the second quarter, but Mercer’s Sam Warren sacked Garret on fourth down-and-6 after the Jaguars had driven to the Mercer 23. The Jaguars didn’t approach the end zone again until they scored on the first play of the fourth quarter.

“I thought we played good defense tonight. I thought our kids got to the ball well … and overall I was pleased with our defense. I thought we did some good things,” Buchanan said. “They threw the ball well, but we took them out of what they like doing the best, and I liked that and I was proud of our kids.”

East Jessamine got 136 of its 224 yards from the passing game after Mercer took away the run and took the lead in the first half.

Mercer had 214 rushing yards, led by Yulee with 101 yards on 20 carries. Yeast ran 14 times for 57 yards, and Dunnn had 43 yards on five attempts. Drakeford completed four of six passes for 40 yards, and Landon McGinnis completed one pass for 13 yards.

For three quarters, Mercer County and Waggener were in a battle. But the Wildcats pulled away late in the game... read more