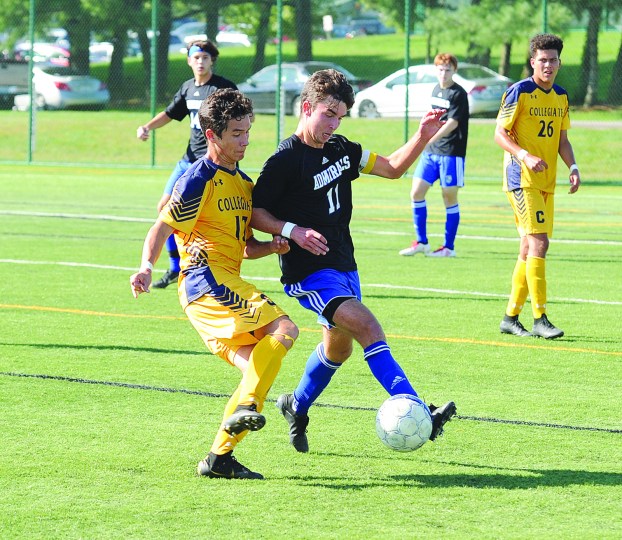 It was a championship game that lived up to the hype.

Centre College played host to the boys’ soccer All-A Championship on Sunday, where No. 14 Danville took on No. 4 Louisville Collegiate.

It was a back-and-forth game from the start, with both teams showing why they are ranked in the top 15 in the state. Collegiate earned the title with a thrilling 2-1 victory.

“That’s what you hope when you play in tournaments like these or any tournament, that the championship would be two really good teams battling it out and grinding it,” Danville head coach Brent Beauman said. “That’s what it was today. It’s just those few unforced errors, they’re just plaguing us right now. That’s how people are scoring on us. Just 20 seconds out of an 80 minute game and we lose 2-1. They’re hurt, but I told them, this doesn’t end our season. It should fuel us.”

The two teams were evenly matched in the first 35 minutes, with prime goal-scoring opportunities falling to both teams early on. Danville had a pair of breakaways — first, a long pass over the top of the Collegiate defense to Briar Sanders, but Sanders’ final touch was too strong. The second came on a strong run from center back Ethan Redmond, who powered through the Collegiate midfield and worked a give and go with forward Nathan Hazlett to have a chance at goal.

“They were junk balls over the top and you’ll take those when you can get them, but the first one with Briar, his final touch was just a bit strong and he doesn’t do that typically,” Beauman said. “Then the second, the keeper just made a great play. You hate that because breakaways, you think they’re guaranteed goals but that’s not something that you really work on in practice. It just happens, sometimes you get the bounce and sometimes you don’t.”

It would be Collegiate’s Sixto Abraham who broke the scoreless tie in the 36th minute. The Titans bombed a free kick from midfield into the Danville box, and a header from Isaiah Wynder fell perfectly to Abraham to score the only goal of the first half.

“We were able to get away with some things against other teams, against this team we couldn’t do it,” Beauman said. “We need to practice at that same pressure so we can win the games and move on and if we’re able to go further, we’re ready and prepared for that level. That was a good team and they did a lot of things that we’ve been talking about, wanting to do. Hopefully now that they’ve seen how it’s played, maybe we’ll do the things we work on more in games.”

Collegiate kept the ball for a majority of the second half, slowing down the pace of the game and keeping the ball away from the Admrials’ playmakers.

But Danville caught a break with 15 minutes left in the game. Tres Walker found Sanders over the top of the Collegiate defense, and Sanders played the ball to a wide-open Hazlett for a goal.

That goal gave both teams life, and the next five minutes were the liveliest of the game. But Collegiate would be the team to capitalize.

Collegiate leading goalscorer Cal LeDoux made a solo run through the Danville defense to make the game 2-1.

“It was a different style that we weren’t used to, they were very organized, very disciplined, you can tell what they work on in practice,” Beauman said of the Titans. “That’s something that we don’t see every game that we are playing. Their midfield pressure really disrupted what we were trying to do. But you make adjustments, you move people around. We didn’t get a lot of opportunities or chances, but especially in the second half we made good combinations and things.”

Although it’s the first loss of the season for Danville, it’s the first All-A state championship for the Admirals since 2010. Beauman is hopeful that this loss will spark his team into the postseason. The 45th District tournament starts Oct. 8.

“I hope so, that’s all we talked about after the game,” he said. “Let it sting. Let it hurt. But let this be fire for the rest of the year. That’s what is so great about this tournament, it’s schools of the same size and it’s midseason. You get the pressure of a big tournament, you might get the sting of a loss, but we’re not turning in jerseys tomorrow. We’ve still got games left. I want this to inspire them, we need a little more killer instinct in them and more fire. I hope this is the thing that pushes them.”

And the Admirals have high hopes for the postseason: Last year, the Admrials won the 45th District title but fell in the 12th Region tournament.

“I tell them all the time, you’re never going to be on a team like this again,” Beauman said. “It’s an incredible team, not just the skill but how everybody gets along. Next year there will be new people, people change, whatever. I want them to be successful for that reward of how great they are.”

The first-ever contest between Danville and Danville Christian Academy went down to the wire. DCA, in its first year as... read more