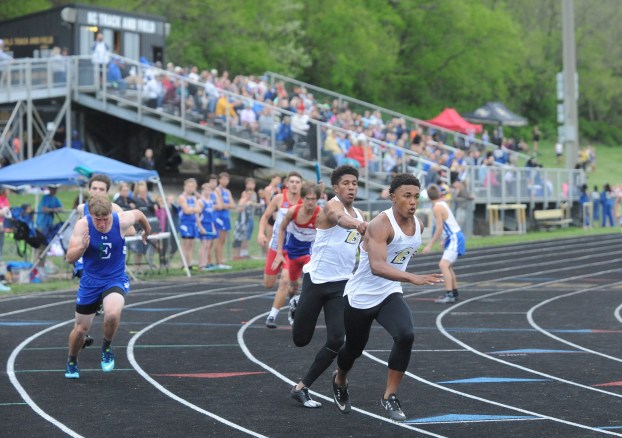 Photo by Matt Overing Boyle County runners Chris Duffy and Marquise Kinley participate in a sprint relay at Boyle County's track facility in 2017. Behind them is the facility's bleachers, which would be renovated as part of an estimated $1.687 million capital project being considered by the Boyle County Board of Education.

The Boyle County Board of Education has approved the initial forms with the state for a pair of capital improvement projects with an estimated total cost of about $4.75 million. Both are related to completion of the new middle school facility.

The board authorized last week a pair of “BG-1” documents, which will put the projects on the radar for the Kentucky Department of Education.

One project is the renovation of the existing Boyle County Middle School building to serve as the new Woodlawn Elementary School building; the estimated price tag is $3.07 million, Superintendent Mike LaFavers said.

The other project involves substantial improvements to the track facility used by the middle and high schools; that cost is estimated at $1.687 million, LaFavers said.

Approving the BG-1s does not commit the board to taking any future action or spending any money, LaFavers noted.

“This does not mean we have to pursue the project; it just allows us to consider it,” he said of the BG-1 for the Woodlawn renovation.

“The next steps would be (the architect) will finish the schematic and design the building,” he said. “And then we’ll bid it. At that point is when we’ll make the decision on whether we want to move forward or not.”

The district is currently building a new middle school, which officials hope to have open for the 2019-20 school year. The Woodlawn renovation project would make changes to the old middle school building so it could serve as Woodlawn Elementary School. The existing Woodlawn building would then serve as the district’s alternative school and central office.

“(district Chief Information Officer) Susan Taylor walked the building with us, she said, ‘We’re going to have two new schools, because it feels like a brand new school, with a new preschool wing and the library is being redone,’” LaFavers said. “The (middle school) building is 14,000 square feet larger than this building — 21 percent larger, and we’ve already spent $6 million renovating the HVAC and lighting.”

The project would make Woodlawn Elementary “one of the best ones you’ll see,” he said.

The track facility project would “take a lot of pressure” off the high school’s turf field, LaFavers said.

The improvements include “expanding the current facility to house locker rooms, restrooms, concession stand and press box, while increasing bleacher capacity to nearly 800,” according to district Communications Director Jennifer Broadwater.

“The project would give our athletic teams much-needed functional spaces, while more evenly distributing usage between the turf field and the grass field,” according to Broadwater.

LaFavers said right now, usage between the turf and grass fields is split about 90/10; the improvements would result in about a 70/30 split instead.

LaFavers said he had a meeting with coaches Friday to show them what the project looks like based on their feedback.

“What’s great about this is the way it’s going to tie into the current middle-school (construction project) — literally from the parking lot, you’ll walk out on-grade to a sidewalk, all of it covered. You’ll have restrooms for patrons and locker room space, and the bleachers — you walk right down, no ramp. It all just fits in on grade to what we’re doing at the middle school.”

Broadwater said the board will be reviewing possible designs for the facility over the coming months and will “formally consider approving the project in January.”

The athletics project can’t be paid for with bonds — its estimated $1.687 million cost would have to be paid for out of the district’s general fund, LaFavers said.

The $3.07 million Woodlawn renovation would be paid for through the issuance of bonds, except for $300,000 that would come out of the general fund, he said.