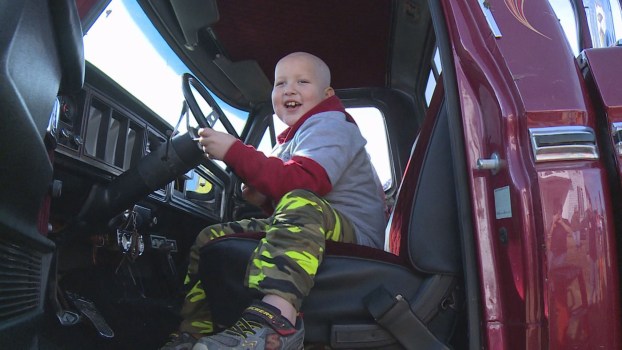 File photo/contributed Bradlee Aguilar-Moreno sits behind the wheel of High Roller II during a past visit by Monster Truck drivers.

Tonya Aguilar-Moreno says even though her son Bradlee was suffering from an aggressive form of brain cancer, he was still tough. So it wasn’t surprising to anyone when they pulled up to Walden Funeral Home Monday for the 10-year-old’s funeral visitation to see three tough trucks parked out front — along with a banner reading “MT4B, Monster Trucks for Bradlee.”

The truck owners are members of a group called Childhood Cancer Crushers — monster truck drivers who volunteer to not only get the word out about how prevalent the disease is in children, but make visits with and give rides to kids who are diagnosed. They came from Chicago, St. Louis and Terre Haute, Indiana, to honor Bradlee’s memory. 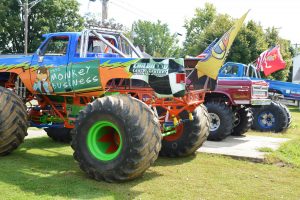 Bobbie Curd/bcurd@amnews.com
Thomas Borders, who owns Monkey Business, is part of a Monster Truck group called Childhood Cancer Crushers, who work to spread the word about the prevalence of cancer in children. They also volunteer to visit children, giving them rides and helping their families during difficult times.

“I know he’s smiling down right now from heaven. He’s saying, ‘All those, out there? They’re here for me,’” Tonya says, smiling.

Bradlee was was diagnosed with anaplastic ependymoma, a tumor that forms when malignant cells in the central nervous system multiply rapidly, two weeks before he turned 3. They spent his third birthday in the ICU at Kosair Children’s Hospital in Louisville.

Bradlee fought hard. Tonya and husband Rodrigo decided not to tell him he was terminal. She says they met other kids at St. Jude Children’s Hospital later who were told, and she felt like they had given up; they never wanted Bradlee to give up.

“We’ve known for at least a year now that we’d exhausted all treatment options,” Tonya says with an incredibly brave face, sitting only a few feet from her son’s body during the viewing. She and he daughter, Emma, wear Bradlee’s favorite color — a light green, that’s both bright and vivid — just like Bradlee.

“He was always smiling. He never met a stranger, even when he was sick.” Tonya says throughout chemotherapy treatments, Bradlee was still upbeat and loved to play. She tells a story of one time when he pulled his IV line out.

“There was blood everywhere, and we ran to get the nurse. It didn’t stop him whatsoever. And the blood — it didn’t seem to bother him. He kept smiling, kept playing.” She thinks he probably got his nature from her and Rodrigo — they’re both pretty laid back.

When they realized he may not have long, Tonya’s aunt contacted someone associated with monster trucks. Thomas Borders, from Terre Haute, the owner of Monkey Business, was the first to respond. “Bradlee’s family reached out and were wanting a truck for the funeral, when they weren’t giving him too much more time,” Thomas says.

Tonya says they wanted a monster truck to take Bradlee to his final resting place, but Thomas told her, “He said, ‘Why don’t we come down and see him, visit him and let him ride in the truck, while he’s still alive and can enjoy it?’”

Bradlee was so excited, she says he grinned from ear-to-ear and squealed, nonstop. It was one of the best days of his life.

“It was like it was meant to be. We were meant to meet (Thomas). He knows how we feel,” Tonya says.

Thomas’ son, Caleb, died from brain cancer, just before his sixth birthday. Thomas built the truck in memory of him. 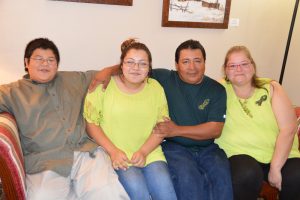 Bobbie Curd/bcurd@amnews.com
The Aguilar-Moreno family sit together at Walden Funeral Home in Perryville during Bradlee’s visitation. Bradlee, who was 10, died of an aggressive form of brain cancer. His family is, from left, brother Bailee, 12; sister Emma, 13; and mom and dad, Tonya and Rodgrigo. The family was happy representatives and friends from the Monster Truck community showed up, and parked outside with a banner to show their support.

“We wanted to give him a surprise,” Thomas says about the January visit with Bradlee. Jeff Krekelerk, owner of High Roller II, and Roni Esparza, owner of One Bad Hombre, also made the visit. “We just wanted to come down and put a smile on his face and make him happy. He got to drive.”

Then, last month, the group came back and surprised Bradlee for his birthday. They made a promise that if and when he passed, they’d be back for the funeral.

Childhood Cancer Crushers run the logo on their trucks, fly the flags and spread awareness about “how much childhood cancer is out there,” Thomas says.

Bradlee’s love of monster trucks may have started out with Hotwheels, Tonya thinks. He’s always loved cars, riding in the truck with his dad and on the tractor. Someone gave him a monster truck toy, then he got to take in a Monster Jam event one year, and that was it for him.

“So when they came down, it was like him meeting his idols. He was so excited,” Tonya says. “They made his wish come true.”

Bradlee didn’t know he was terminal until the week before he passed. His health went downhill very quickly, and the Hospice nurse told them he only had a few hours left. That was on a Friday.

“At that point, we started talking to him about God, that it was OK, Mommy and Daddy would be OK, brother and sister are still here to help us. But he hung in there until the following Thursday. He was just tough. A tough, tough boy.”

Tonya says her other son, Bailee, has handled things pretty well — but they never hid anything from him or Emma. “So they’ve known every time we went to the doctors, and I told them what was going on. But a lot of the time, they didn’t want to hear. Emma would put her fingers in her ears and say ‘lalalala’ really loud, and I’d tell her — you need to hear this. She’s been like a second mother to him.”

When Tonya is asked what the one thing is she’d want people to know about Bradlee, she chooses instead to speak for all children.

“Only 4 percent of government money goes to childhood research. Our children — Bradlee and a lot of the children I know from St. Jude’s who are no longer with us — they’re worth more than 4 percent. Something needs to be done and something needs to change,” Tonya says, the smile leaving her face. “That’s our future. And the government doesn’t want to invest in it.”

To find out more about Childhood Cancer Crushers, look them up on Facebook.

Saving Your Streambanks: Boyle County Workshop By Lindsie Nicholas Bluegrass Greensource Why is the drainage ditch or stream in my... read more