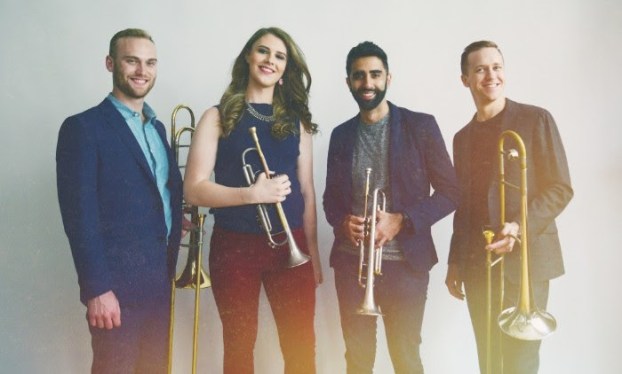 The Westerlies ‘blow’ into Danville with Norton Center performance

The Westerlies, a New York-based brass quartet comprised of four childhood friends from Seattle, Washington, will be blowing into town on Friday, Oct. 5 to perform at the Norton Center’s Weisiger Theatre. Named after the prevailing winds from the West to the East, Riley Mulherkar and Chloe Rowlands on trumpet, and Andy Clausen and Willem de Koch on trombone, explore classical, jazz, and roots music influences. Their hybrid of styles produces music that is both, “folk-like and composerly, lovely and intellectually rigorous” (NPR Music). Equally at home in concert halls and living rooms, The Westerlies navigate a wide array of venues with the precision of a string quartet, the audacity of a rock band, and the charm of a family sing-along.

“The music we make draws upon a wide variety of styles and influences, from western classical music to American folk, jazz, and beyond. While many of the pieces we play might appear unrelated on the surface, we strip them down to their essence, discovering various through-lines between them and revealing the unique qualities that make each piece sing” explains The Westerlies.  “No matter what music we’re playing, we always strive to create a bold and personal chamber music experience, imbued with the spirit of improvisation and a joyful sense of fun.”

The ensemble has produced two critically acclaimed albums, “Wish the Children Would Come On Home: The Music of Wayne Horvitz”, and a double-CD of primarily original compositions, “The Westerlies,” and have been featured on recording by other artists such as Fleet Foxes and Dave Douglas. This season will also mark the release of several new collaborative recordings with artists such as Theo Bleckmann and Vuyo Sotashe.

“Don’t try to put a label on this brass quartet,” warned Steve Hoffman, Norton Center executive director. “Masterful musicians who write their own melodic compositions, arrange classical and jazz favorites, and keep their audiences entertained, this group exudes more fun and skills than any quartet of trumpets and trombones out there!”

Besides their musical talents, The Westerlies also utilize their long-standing friendships to form a heart-driven non-profit geared to, “enrich a bold and personal chamber music experience in both local and global communities.” This “accidental brass quartet” uses their resources and time to fund art programs, as well as offer their own educational outreach programs such as lectures, masterclasses, extended ensemble coaching, brass boot camp, improvisation and college audition workshops, composer forums, side-by-side performances, and even classes on the business of music.

The Westerlies will be in concert at Centre College’s Norton Center for the Arts on Friday, Oct. 5 at 8 in Weisiger Theatre. Tickets start at $29, and are available at NortonCenter.com or by calling the box office at (859) 236-4692.

The afternoon of Oct. 5, an artist gathering will be held for the performance. This special event is open to the public, and musicians are invited to bring their instruments and jam with the band. RSVP to Jessica.durham@centre.edu.

KENTUCKY JUSTICE AND PUBLIC SAFETY CABINET Press Release During the month of September 2018, there were 18 traffic accidents investigated... read more