Tim Breitenbach will again be in the dugout for the Admirals this spring, but this time it’ll be as head coach. 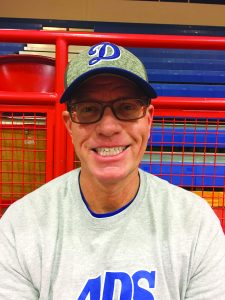 Breitenbach was an assistant coach last season and had that same role more than six years ago when his oldest daughter, Kayla, was on the team. He stopped coaching when his brother, Eric, was diagnosed with liver cancer.

“When Eric was diagnosed with liver cancer back in 2012, I was an assistant coach. I resigned,” Tim said. “In 2013, that was Kayla’s senior year. If Eric hadn’t been sick, I probably would’ve still been coaching, maybe head coach. So I always thought that I’d get back into it if I could, if the opportunity came up.”

Tim is excited to be a head coach and said he’s learned from some of the Admirals’ head coaches in the past.

“I learned a lot from coach Jerry Perry over the years, I was an assistant for him for three years,” he said. “I enjoyed the game and I just love the game of softball. I’m anxious to get started. We’ve had a meeting with the players, meeting with parents the week after fall break and then we’ll get started.”

He’s already started on a schedule and said that the Admirals will be looking for challenging competition in 2019. They were 5-18 last season and 4-20 the year before.

But more than anything, the new coach said he wants reps for his young team.

“I’m anxious, our girls need more reps,” Tim said. “Last year we had 14 games canceled, the weather was horrible. We’re going to get started, hopefully we can get outside some. But I’ve already started on the schedule and I’m trying not to schedule cupcakes. I want good competition and then go from there. I’m excited.”

Tim said that having a daughter on the team is a fun experience and that Faith was happy for him when he was offered the job.

“She thought it was pretty cool,” Tim said. “I was with the team last year as an assistant coach and I’ve coached Kayla too. They like dad around, but once we’re on the field, I try to let someone else coach them. She was good with it, she’s happy for me.”

Tim is in his 25th year at Bate Middle School where he is a special needs teacher.

“WWe lost a couple of seniors, but most of our offense is back,” Tim said. “Our main pitcher is a senior, Peyton Young. Rachel Matherly, another senior, she’s our second baseman and good hitter. We’ve got leadoff coming back, first baseman back. Anna Swann is back, she’ll be our third baseman. Abby Thomas is a good catcher, good hitter and she’ll be back. Ella Dampier got a lot of experience as a pitcher last year. We just need to get some reps in and not be so young.”

By JOE MATHIS Contributing Writer LEXINGTON — With 7:13 to play in the first half in their game against Tates... read more