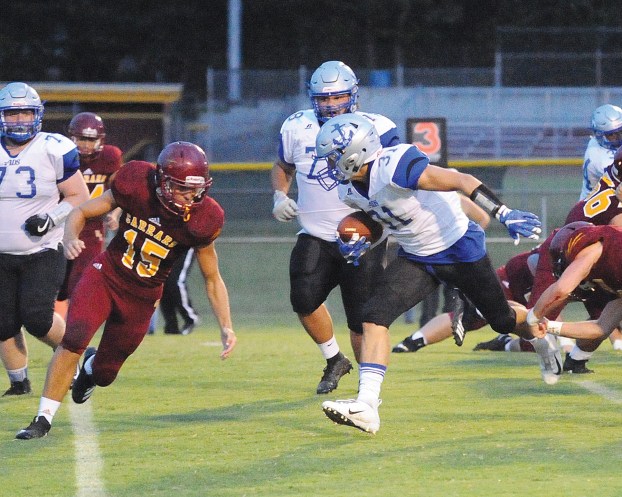 Admirals look to bounce back in districts

Danville’s non-district schedule wasn’t what some might have expected from the defending 2A state champions.

But the Admirals’ 3-4 record goes out the window tonight when Danville hosts Somerset (5-2) to open district play.

“We’ve still got some questions we’re trying to get answered,” Danville head coach Clay Clevenger said. “Obviously it’s not the start we would’ve liked but you’re 0-0 in districts and this is the time of the year that really counts.”

“They’re a very solid football team, I’ve been really impressed with their defense and their front seven defensively and how they command the game and dictate a lot of the game,” Clevenger said. “Offensively, they’ve been a little inconsistent at times like we have but they’re putting enough points up to win games. I think we’re going to really have to play well in order to win.”

The Admirals have been limited due to injuries in recent weeks — last week, starting quarterback Zach Thornton went down and Clevenger said his status is uncertain.

“We’re just trying to nurse him along, get him back to where if he’s ready to go Friday night, he can, but not trying to rush it, either,” the coach said. “It’ll be a game-time decision on that. We’re a little beat up right now, we’ve got to have some other guys step up for those people that are out.”

Should Thornton miss the Somerset game, Clevenger said he likes what he saw from backup quarterback Brady Morse.

“He was put in a pretty tough position and I thought he handled it really well,” Clevenger said. “That’s all you can ask. We’ve got to have some other guys step up around him. We’ve got enough seniors, they need to start carrying and shouldering the load, understand that they’ve got to be the ones who step up when things like that happen.”

Clevenger said he’s seen players step up this year, but the team as a whole has been inconsistent.

“I think that in general, we’ve got to get better as a team in those aspects,” he said. “If it’s one guy one week, it’s another guy the next but the other person might step back. We need everybody stepping forward and picking up slack, executing play in and play out.”

In recent years, the Admirals have been able to use the big play to swing a game in their favor. That can still happen this year but the chances haven’t been there as often, which means Danville needs to focus on each and every play.

“We had a pretty good week of practice,” Clevenger said. “I think the biggest thing, going out and executing on gameday, is understanding that every play counts and every play can be the difference in the game. Our margin of error isn’t as big as it has been the past couple of years so we’ve got to make sure we’re executing and playing hard every single snap.”

It’ll take a strong performance on both sides of the ball, Clevenger said, and it’ll take an intensity that matches what Somerset will bring to Admiral Stadium.

“I don’t know how well we’ve responded to having that ‘X’ on our chest this year and understanding that,” Clevenger said. “I think some of our performances have shown that, teams are getting up and excited to play us and we’re not always matching that intensity. That’s what has got to change, and if it doesn’t change this week, then we’ll be feeling sorry for ourselves again.

Danville softball announced its newest head coach last week. Tim Breitenbach will again be in the dugout for the Admirals... read more