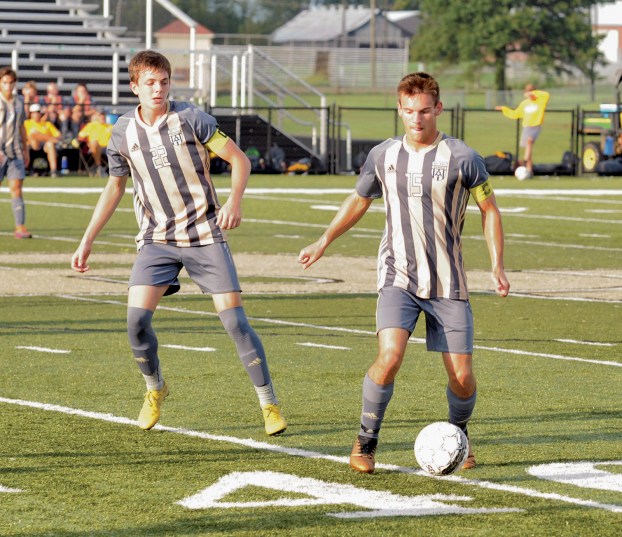 Two Boyle County boys’ soccer players have combined for nearly half of the team’s goals.
Caleb Jackson and Ryan Henry are nicknamed “the Dynamic Duo,” and for good reason. The two have combined for 33 goals this season in 17 games and have an additional 26 assists between them.

What makes those numbers even more impressive is that the two haven’t always played in attack. Jackson has played all over the midfield — attacking, defensive, left and right — as well as playing anywhere on the front line. You could see Henry playing any outfield position, depending on the game situation and opponent.

The players said they’re OK with playing anywhere, and since they’re usually out there for the full 80 minutes in a game, they’ll be found all over the field.

“I’m willing to do anything, wherever they need me most,” Henry said. “It’s different playing a different position almost every game but it’s worth it if it means helping us win.”

“It goes with what Ryan said, if it helps the team in any way, that’s what we’re going to do,” Jackson added. “We’re all brothers out here and we’ve all put in the work. Whatever coach is going to ask us to do, we’ll do it. He’s been doing this a long time and he knows what he’s doing.”

Jackson is third in the state with 22 assists this year, an average of 1.3 per game. Henry’s 20 goals lead the team.

Oftentimes, the two find each other in favorable attacking positions. Just Tuesday against Bardstown, Jackson had a goal and assist while Henry had two goals and one assist. Each assist was to the other member of the dynamic duo, and Boyle won 4-2.

“We’re just helping each other out, in my opinion,” Henry said.

“We’re just the dynamic duo, if we score, it’s basically a bucket on both of our parts,” Jackson said.

Since a 4-0 loss to 45th District opponent Lincoln County on Sept. 6, the Rebels have gone on a tear, winning seven of eight games. They’ll face Anderson County tonight in their final regular-season game.

“The last several games, this team has given me a lot of hope,” McMann said. “If they’re willing to work as hard as they can and play to exhaustion, I think we’ll be fine. If they’re not willing to do that, it’s going to be a struggle. When they work, we get good results.”

Jackson and Henry’s teammates have been putting in the work recently as well: Sophomore Caden Ferrell is second on the team with 16 goals and eight assists, and junior Eli Goggin has added eight goals and seven assists.

“With a lot of guys scoring, it gives us comfort giving them the ball in those situations,” Jackson said. “Certain individuals on our team we might not feel as comfortable but with all these people scoring, we’re growing trust. That’s good for us because we don’t have to do all the work and we can distribute the ball more.”

Henry said the additional goalscorers this year have helped take the attacking load off of himself and Jackson.

“If we’re not having a good game, it helps always having someone else that can score,” he said. “They can help carry the team.”

Defensively, the Boyle back line has kept four shutouts in their last seven games. Senior Will Imfeld joined the team this year and has combined with juniors Hunter Baltazar, Ethan James to solidify the back line.

“Will’s an animal. He’s just a natural athlete and we’re lucky to have him,” Jackson said. “Hunter on the right, he gives everything he’s got every single game. Gabe (Hodge) on the left, he was up top and then moved to defense and scored a hat trick. Whenever he was striker he never scored.”

A return to form in recent games has the team excited as the postseason nears — Boyle has a rematch with Lincoln in the first round of the 45th District Tournament on Monday.

“The last few games we’ve been coming out strong, I think that’ll help us going into districts,” Henry said.

It’s that rematch that will determine who advances to the district championship and the 12th Region tournament. Boyle has advanced to region in each of the past five years.

“The mindset that I want to keep is just a positive outlook, the possibilities that we can have,” Jackson said. “We’ve had games that have been really close that we haven’t played our best but came through and got the victory. Going into districts on Monday against Lincoln, we lost to them 4-0 so we’re going to have some fire going into it.”

To do that, McMann said that his team will have to look to its dynamic duo. He also wants his dynamic duo to be more vocal.

“I think they do a fine job setting the example with how they play,” McMann said. “I need them to be a little bit more vocal as leaders, too. They let people know when they’re playing up to their potential, but I think part of the captain’s job is to let people know when they’re not as well. So it’s not just coming from the coach, it’s coming from peers and teammates as well.”

Jackson said having a strong district tournament from the very first game means the team will be prepared from the first whistle.

“With the depth of this district, it gives us the opportunity to play good teams throughout the year,” he said. “Districts before region, we’ve got that mentality of playing hard every second. We can go into regions and not underestimate our opponents.”

Boyle County girls soccer has played one of the toughest schedules in the state. The Rebels go out with a... read more