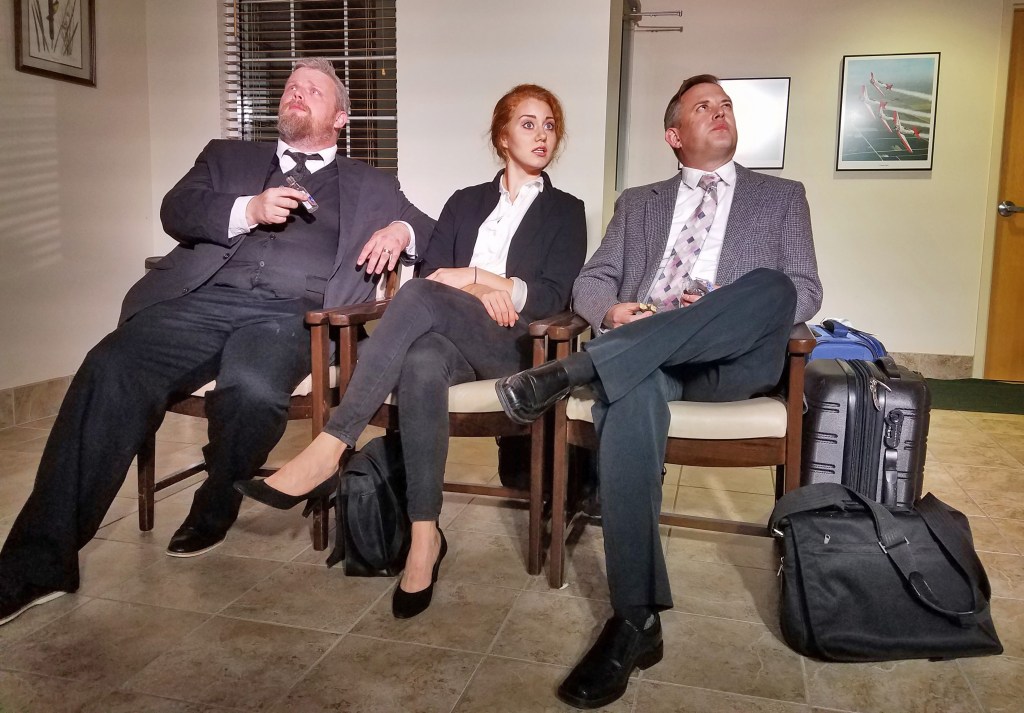 Suicide. Death. Darkness. Scarlet Cup Theater has covered it all, says Liz Orndorff, so now — it’s time for a comedy. So “Departures” is off to do just that, starting Thursday, and what’s even better, Orndorff says, it will hopefully pull a lot of locals out to see a local treasure many didn’t even know they had.

“This play is so fun to watch, especially when you’re sitting in an airport,” she says. Scarlet Cup is in its third season producing “pop-up shows” in venues outside of traditional theaters. “Departures” is a comedy with a funny premise — which will all be put on at the Danville-Boyle County Airport in Junction City.

“The understanding is basically, all airports look alike. And you’ve got four actors — two women and two men — portraying nine different characters of different nationalities. Oh, and one German hooker. Had to get a hooker in — it’s a British play,” Orndorff teases.

But this isn’t Benny Hill, she says. 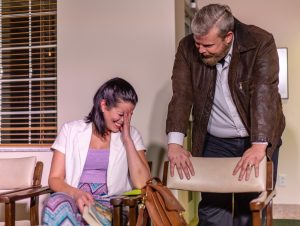 Ben Kleppinger/ben.kleppinger@amnews.com
Stephanie Pistello, left, and Eric Seale portray the characters Claire and Jim during a dress rehearsal of “Departures.”

“It’s very funny, but not slapstick. It’s sophisticated,” Orndorff says — but not too much so; everyone will be able to identify.

“All of their flights are being delayed. There’s a lot of humor, some soap opera and some frustration.”

The play will be held inside of the terminal, right by the door and glass windows that look out onto the airstrip.

“And there’s a chance planes could be landing during the play, which has happened during rehearsal,” she says. “But since we don’t start until 8 p.m., generally everyone’s already in, since it’s dark. But it’s still very possible.”

The play was written by John Godber, and was seen in England by Tony Haigh, a member of Scarlet Cup who is directing it here in Boyle County.

“We knew we desperately needed a comedy; we’d already done four dramas. Tony saw it and fell in love with it,” Orndorff says. Godber is the third-most produced playwright in England after Shakespeare and Alan Ayckbourn, she says. “He’s written a ton of plays and has done many regional ones. He likes to write about things people can relate to in real life. Tony saw it, brought it back and gave it to me to read.”

To commission a play overseas like this takes more than just an email, though. Orndorff and Haigh worked not only to contact the playwright and publisher, but had to wire the money, which included working through a foreign exchange rate.

“So we had to work through the bank, had to do that three times now,” she says, but it’s all been worth it.

Then, they contacted Rob Caldwell with the airport board. “We couldn’t have done it anywhere else, and they’ve been absolutely wonderful to work with.”

The play examines all kinds of relationships, she says — marital, boss-employee, parental …

“You have different personalities of the two men — one plays a guy who has at least three women, in addition to his wife; the other plays it straight.”

It’s a lot of different angles involving relationships that are put under the stress of travel — something everyone can identify with, she says. “Which is why his plays are so popular.” 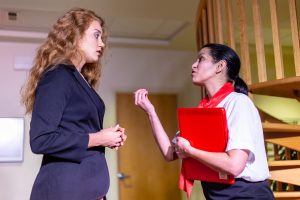 This is the American premiere of “Departures,” as it’s never been put on anywhere else in the United States.

“Audiences will love seeing the airport. So much so, I wish we were giving a daylight performance,” she says. But they had to move their normal 3 p.m. Sunday matinees to evening performances. “Sundays are the busiest time of the week for them. We’re guests of the airport, so we have to be mindful of that.”

Scarlet Cup attempts to put on two performances a year; one in the spring and one in fall. “Summer is taken over by West T. HIll and Pioneer Playhouse, and we don’t want to compete with them. But the fall is also loaded with every kind of festival, so we’re going up against a lot of things …”

The actors are amazing, she says, and won’t disappoint.

The cast includes Eric Seale of Springfield; Stephanie Pistello and Drew Sutherland, both of Lexington; and Fannie Lemasters of New York. Elizabeth Haigh is serving as sound designer and stage manager.

“They have nailed it, night after night. And Tony’s daughter-in-law — Elizabeth — is a genius with electronics and sound. She has created a CD that is the public address announcements coming over the airport system in 10 different languages. She’ll be up in the loft with Tony running that.”

Orndorff says she’s learned a lot in the process, such as the airport was built in 2008. “It’s 10 years old, but they keep it so nice. Really nice. It’s very cool and interesting, and they really were excited about us doing this out there. They want people to come out and visit it, since tax dollars pay for it.”

She says a lot of people have commented to them that they didn’t even know there was an airport in Boyle County.

She says now that people have gotten used to the “pop-up” principal and three American premieres so far, Scarlet Cup has gotten to the point after three years that “they don’t ask us what play we’re doing, they already know they’ll have never heard of it. They ask us where it will be.”

Tickets for “Departures” are on sale now at danvillearts.org, the site for the Arts Commission of Danville/Boyle County, the new fiscal sponsor of Scarlet Cup Theater; can be ordered from the Scarlet Cup Facebook page; or by calling (859) 319-1204.