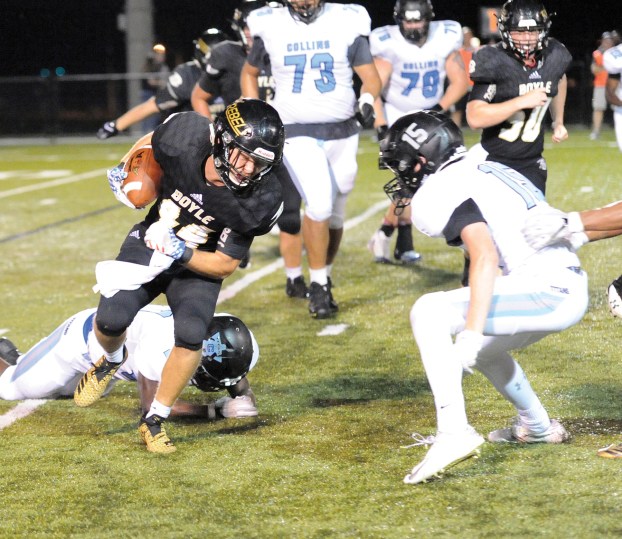 Boyle County is ready for its next challenge.

After a bye week last week, the No. 1 Rebels sport a perfect 6-0 record and will host Garrard County (2-4) tonight.

“I thought we had a good off week,” Boyle head coach Chuck Smith said. “This week we’ve come back, we’re fighting through a couple injuries, we’ve been working on people in new positions so it hasn’t been as smooth.

The Rebels have been bitten by the injury bug in recent weeks, but some time off has helped. Kicker Jackson Smith is back and will play Friday.

“Jackson will be back, but our list has mounted up,” coach Smith said. “We’ve got four or five guys sick, injured or something is wrong with them that has affected our practice and the way we’re progressing.”

Reese Smith is one of those players who won’t play on Friday, but is nearing his return after an injury against Collins on Sept. 14.

Coach Smith said he’s liked the way his team has prepared for Garrard County this week.

“We’ve got to take care of ourselves. We’re on a mission to get better every single day and every single game,” he said. “That’s the way we’ve got to approach things. We have all the respect in the world for Garrard, we don’t overlook anybody, especially Garrard. They’re a smash-mouth, well-coached football team and those teams are dangerous teams. We’ve got to work on getting better and executing the way we need to offensively and defensively to achieve the goals we’ve set for ourselves.”

He also said he expects a good mindset — the team has practiced well in its past two weeks and had a good attitude about it.

“On the bye week, I thought we had a good week,” the coach said. “The guys came out and really worked hard, it was productive for us. We wanted to get better at certain things, fundamentally sound. We worked on those things and I thought the kids approached it with a workmans type attitude. I definitely think it was a productive week for us.

“For the most part, our guys have really done a good job of stepping up and taking on the challenge that we’ve given them. I think that’s been really solid. What I would like to see more of, the other guys who have been starting, I think we need to get them to take their game to another level. When we start doing that I think we’ll really elevate to another level as a team.”