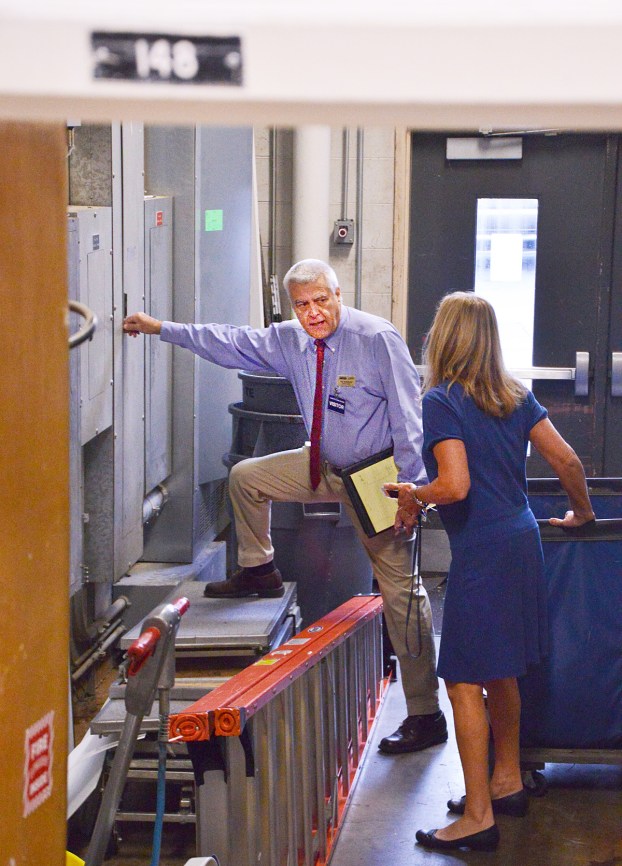 Photo by Robin Hart/robin.hart@amnews.com Ray Woodyad with the KCSS talks with Christy Denny, director of facilities for the Danville Schools in the mechanical room at Danville High School Tuesday morning.

Danville Schools were given a “modified” safety check by members of the Kentucky Center for School Safety on Monday and Tuesday.

Dr. Tammy Shelton, superintendent of the Danville Schools, requested KCSS conduct the safety checks at each of the district’s four schools to look at ways the principals and staff could make their facilities safer.

“They didn’t invite us in for pats on the back,” said Dan Orman, training coordinator for KCSS who was at Danville High School early Tuesday morning. Ed McKinney, director of school services, and Shelton “really want to shore up safety and security,” Orman said. 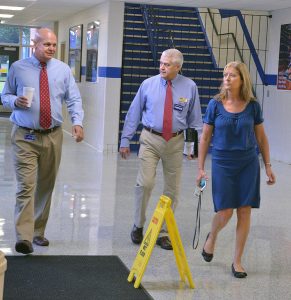 From left, Ed McKinney, director of school services, Ray Woodyard with the KCSS and Christy Denny, director of facilities walk down a through a hallway near the Danville High School gymnasium Monday morning.

Safety concerns could be as simple as a microwave oven plugged into a string of three or four extension cords; or a heated wax potpourri burner that could burn out or spill hot wax on students; or even a nice cozy reading nook with an electrical outlet that isn’t covered could pose a hazard.

There are many OSHA regulations that schools need to follow, Orman said, and KCSS can point out any violations and hazards that may go unnoticed by school officials. But the KCSS is not a “compliance agency,” Orman said. “We want to protect schools from legal exposure. There is so much to manage for principals.”

A light rain was falling as two teachers and security officers greeted students who were entering the high school Tuesday morning, during the visit. Even though the required rugs were just inside the the door, a student still slipped and fell once her sandals hit the slick floor.

She wasn’t hurt, but school staff quickly decided more rugs needed to be laid down. Orman said the school was doing what it was supposed to do, but it was good the staff saw and took action to make the entrance even safer.

As Orman was observing the school’s morning protocols, he commented on the importance of having the teachers outside greeting students and stopping visitors from entering. He said they were very friendly to him and his co-worker, “But they made it clear we weren’t coming in” without signing in, wearing an ID badge and making their intentions known.

Orman said it appeared the school also had “quality supervision” before classes began, with at least six teachers in the lobby who were engaging with the students, asking them about their morning and even if they had yesterday’s issue resolved.

Ray Woodyard was also checking on the safety features of the building and grounds at the high school with Christy Denny, who is director of facilities for Danville Schools.

Several times, he commented positively on the warning signs posted on locked doors to mechanical rooms, where the heating and cooling systems were located. He also complimented how well organized the custodial closets were, with chemical bottles correctly label.

But there were issues he pointed out to Denny — blank breakers needed to be added to a couple of breaker boxes; and a few fire extinguishers were out-of-date, which a company was supposed to have replaced; and they found an overloaded extension cord. When he picked up a rubber door stop beside a door leading outside, he said it was a breach of security. Denny agreed and said she picks them up every time she sees them.

At the end of the inspection, Orman and Woodyard were going to meet with the school’s officials and go over their findings.

Orman said the KCSS has 86 “full-blown” safety assessments scheduled throughout the state this school year. The ones conducted in Danville this week are considered “modified assessment protocol” visits.

For the full safety and security inspection, it takes the school about four to six weeks to prepare surveys and schedule parents, teachers, staff and student interviews, Orman said.

Then on the day of the inspection, a team of six certified workers from KCSS are stationed at different areas beginning when school buses start pulling up to the building. The team stays all day, watching and taking notes of the school’s procedures and conducting interviews.

The school gets some of the information collected that evening, but a full report will be hand-delivered in about a month once all the data is compiled, Orman said.

McKinney said in an email that the Danville Schools’ invitation for KCSS to conduct a safety walk-through is not a response to any safety issue that has occured at any of the schools.

Photo by Robin Hart/robin.hart@amnews.com Christy Denny, director of facilities for Danville Schools, unlocks a door during the Danville High School’s safety inspection Monday morning as Ray Woodyad with the KCSS givers her a thmbs up for having the proper notice on the door.

Photo by Robin Hart/robin.hart@amnews.com Ray Woodyad with the KCSS inspects an outside door near the band room at Danville High School.

Photo by Robin Hart/robin.hart@amnews.com Ray Woodyard, with the Kentucky Center for School Safety, speaks with Christy Denney, director of school facilities for the Danville Schools, in the Danville High School kitchen.
You Might Like

A home on Bonta Lane was destroyed by fire Wednesday afternoon. The house’s two residents weren’t injured, but the... read more