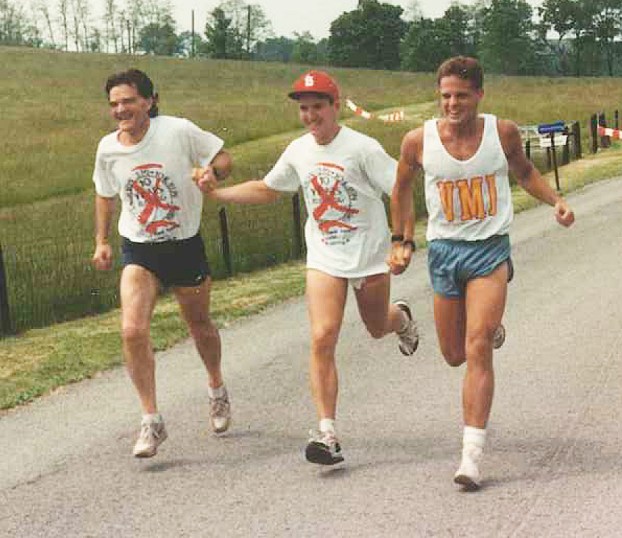 Photo by Elmer Jackson Dr. Mack Jackson, left, runs across the finish line with his son, Tate Jackson, on the right with an unidentified runner between them during a Jackson Run sometime in the early 1980s.

Jackson Run celebrates 40th year: Race still free of charge, held in memory of man who turned his health around

A man’s Christmas gift to his older brother more than 40 years ago spurred what has become an iconic 5K race in Danville — The Jackson Run, which is set for this Sunday at 4 p.m. on Chrisman Lane.

Dr. Elmer Jackson said he had been running for a long time before moving back to his hometown in Danville to start his medical practice in 1974. He said his brother, Dr. Mack Jackson, was five years older and was everything but a runner. He smoked two packs of cigarettes a day and didn’t have the most healthy lifestyle.

For Christmas in 1977, Elmer gave Mack a pair of running shoes and asked to train Mack for just a month. After that time, if Mack didn’t want to run anymore, then he could just throw away the shoes. “And I told him I wouldn’t bother him anymore,” Elmer said.”But he was hooked!” 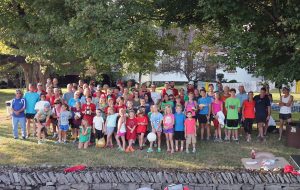 Photo by Elmer Jackson
Last year’s group photo after everyone ran the Jackson Run was taken at Mack and Gerri Jackson’s home on Chrisman Lane. Sunday will be the 40th anniversary of the Jackson Run which starts at 4 p.m.

Elmer said in ‘78, there weren’t many organized races for runners in the area. So, Mack said they should “have a race of our own” Elmer said.

At that time, both brothers and their families lived on farms on Chrisman Lane. Mack measured from his driveway to Elmer’s and it was exactly 3.1 miles — a 5K, Elmer said. “It’s amazing that it worked out that way.” So that’s where they planned to have the first Jackson Run.

Mack also wanted a “little more challenging” 6-mile race, so for the first few years, runners could either run the 5K or choose to run the 10K by running the course twice.

Today, nearly 100 people take part in the Jackson Run. Those who want more of a challenge can take an optional course off of Chrisman Lane and swing through “an enchanting forest” before ending at the same finish line as other runners, for a total of 3.8 miles.

Even though Mack died in 2005, Elmer is keeping the Jackson Run alive. He said the forest area was Mack’s dream. Many years ago, he planted seedlings — which is now the forest and where Mack’s wife, Gerry, still resides.

“It’s really beautiful back there,” Elmer said. “We didn’t envision we’d do more than one race. But it just keeps going.

There has never been a registration fee or corporate sponsors, yet participants always get a free T-shirt and prizes are awarded. Not your typical prizes though. Homemade breads and pear preserves are awarded to second and third place winners. There’s also a large MOP  trophy given to someone who comes in the “Middle Of the Pack,” Elmer said.

The 40th run is special, Elmer said. As usual, anyone can be a part by just showing up at 305 Chrisman Lane sometime before 4 p.m., which is when the race takes off.

After everyone crosses the finish line, a short, fun kids’ race will be held. 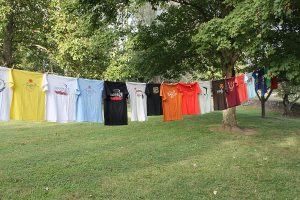 Photo by Elmer Jackson
T-shirts from every Jackson Run hang on a clothes line where the race finishes.

Following the race, runners and their families can bring a picnic to Mack and Gerry’s farm — soft drinks and water will be provided.

Also, all 40 unique T-shirts from each of the Jackson Run races over the years will be hanging from a clothes line reminding people of the history of the community event.