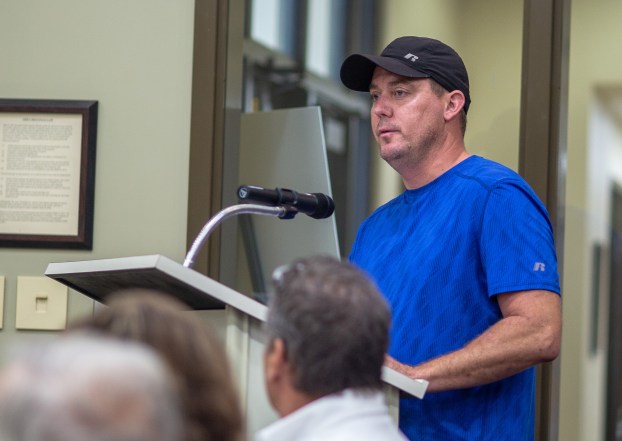 Ben Kleppinger/ben.kleppinger@amnews.com Bryan Sharp talks to P&Z commissioners Wednesday about the dogs he keeps on his Perryville Road property.

A homeowner who is running a dog kennel out of his Harmon Heights residence off of Perryville Road could not convince the Danville-Boyle County Planning and Zoning Commission to recommend a zone change for his property this week.

Neighbors protested at a public hearing for the proposed zone change, claiming the dogs kept by Bryan Sharp already frequently get loose, cause a lot of noise and create a terrible smell.

Sharp wants to rezone his property from residential to agricultural, which would allow him to legally run a dog kennel business, P&Z Director Steve Hunter explained. But the agricultural zone would allow a lot more than a dog kennel — it would remove limitations on the number of structures and make it possible to run other businesses, including a junkyard, Hunter said.

Sharp’s property at 3204 Perryville Road is surrounded on three sides by residential properties and sits in the middle of a large block of residential zoning, according to maps provided in a P&Z staff report. Sharp applied for the zone change by arguing the existing zoning is inappropriate. 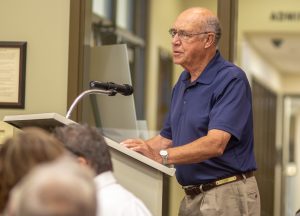 Ben Kleppinger/ben.kleppinger@amnews.com
Boyle County Magistrate Phil Sammons tells P&Z commissioners Wednesday that he is opposed to a zone change that would allow a Harmon Heights resident to keep a dog kennel on his property.

Hunter acknowledged to P&Z commissioners that the zone-change request is “a tad bit odd.”

Hunter said Thursday that Sharp’s zone-change request was precipitated by P&Z pursuing a code enforcement action against him for running an illegal business. When Hunter followed up on reports that Sharp had more dogs on his property than is allowed — a kennel is defined as having more than three dogs under local regulations — Sharp initially said he wasn’t “doing anything” on his property, Hunter said.

But then Sharp obtained a kennel license from the county, which he thought would resolve the matter, Hunter said.

Even with a license, Sharp’s land is not zoned to allow a dog kennel, Hunter explained.

At Wednesday’s public hearing, Hunter said P&Z staff have observed as many as 13 dogs on the property during visits; P&Z has received reports of as many as 40 dogs. Ten residents of the Harmon Heights neighborhood spoke against the rezoning, as well as Boyle County Magistrate Phil Sammons.

Sammons sits on the Boyle County Fiscal Court, which must decide whether to accept the P&Z commission’s recommended denial of the zone change.

Sammons began his remarks by saying, “I hope I’m not out of order.”

“I have several neighbors here that they cannot sit outside on their porch because of the dog smell,” he said, before alleging one of Sharp’s dogs may have gotten loose and killed a neighbor’s dog.

P&Z commissioners later determined through questioning that there was no hard proof it was one of Sharp’s dogs.

Sammons said, “the stink knocks you down.”

“This was a beautiful, beautiful piece of property until this gentleman moved in,” Sammons said. “He moves in, the first thing he does is have a bunch of junk cars. It looks like a junkyard most of the time. We just don’t need that in a residential area.”

The smell and junk on the property were recurring complaints made by neighbors on the record during the hearing.

“I’m afraid if we do go to agricultural, there would be no limit on what he could do,” said Lee Fowler.

“He does want to do a junkyard and sell parts,” Fowler alleged, though no evidence of the claim was presented. “His place looks like a junkyard now.”

Kyle Wynn said he would be open to a junkyard business opening somewhere in the community if it brought jobs, but not in the neighborhood where he raises his children.

“Not only do I think it needs to be denied, I think personally, something needs to be done about what’s going on right now,” Wynn said.

Kristy Green said she believes Sharp is “a nice guy” who has “good intentions,” but she’s afraid his property is harming others’ property values.

“There is other places besides next door to us that can do this,” she said. “Buy a place out in the country, where you don’t have to worry about having close neighbors.”

John Thomas said he can’t sit on his back porch because of how many flies there are due to the dogs.

“The dogs are really a menace as far as I’m concerned,” he said. “They are constantly barking — the smell is unbelievable.”

Asked after the hearing about his neighbors’ comments, Sharp said, “Everybody lied except for one person.”

“My dogs never bark really, unless they’re playing with each other or if there’s a rodent,” he said. “… They don’t bark. They howl when an ambulance comes. And it’s not any emergency vehicle, it’s only ambulance.” 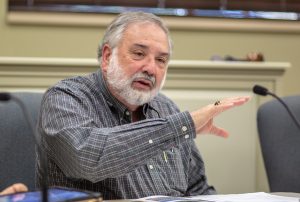 Sharp denied that any of his dogs got loose or killed another dog. “That was the first I’d heard of that,” he said.

Sharp said he will wait now to see what Boyle County Fiscal Court does with the recommendation from P&Z, but he will “prepare for the worst.”

If the zone change is officially denied, Sharp said “I’m not getting rid of my dogs.”

During the hearing, Sharp said he is currently keeping six adult dogs at his property and he is breeding them to sell. The average litter is “six to eight pups” but litters have been as big as 16.

“It’s more of a pet than a true kennel, but I do want to have the option to breed them because of the breed and everything,” he said.

“I had a Siberian husky, and they are not comfortable in this environment — let’s just say that,” DiMartino said, referencing the breed’s thick coat of fur designed for much colder climates.

DiMartino called what Sharp is doing “a commercial business.”

“It’s more of just a hobby than a business,” Sharp said.

“But if you’re selling the animals, it’s not a hobby,” DiMartino said.

But, Hunter added, he believes Sharp will comply with the rules if it comes to that.

Boyle County has a drug court in “name only,” according to a draft study of the jail and criminal justice... read more