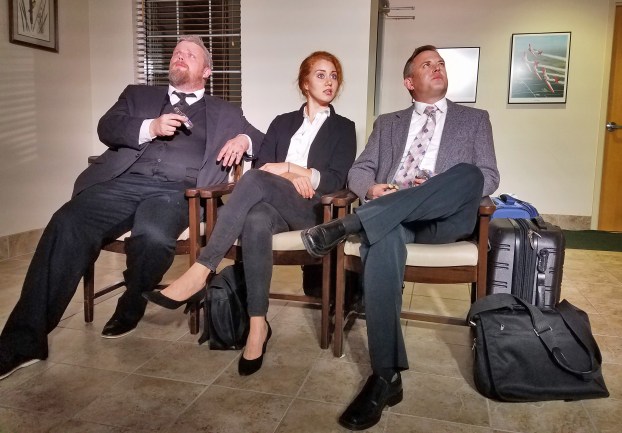 Scarlet Cup Theater has done it again. It’s newest play, “Departures,” offers fans of theater something truly unique — something that they’ve never experienced before, and won’t get to experience again after it closes next weekend.

If you wanted to see the hilarious yet powerfully moving play by John Godber before Thursday night, it wouldn’t have mattered where you lived in the U.S. — you couldn’t have without traveling across the Atlantic Ocean.

When you think of play premieres, you probably think of Broadway, of big cities, of huge performance spaces with hundreds of seats. “Departures” made its U.S. debut Thursday night in the terminal of the Boyle County Airport, more than 700 miles away from Broadway, in front of no more than about 40 people.

And Thursday wasn’t an American premiere on a technicality — it’s not like this is an unknown play or playwright. Godber has been the third-most produced playwright in England, after only William Shakespeare and Alan Ayckbourn.

Why Godber is so famous in England but virtually unknown in America is a mystery to “Departures” director Anthony Haigh. I don’t understand it either, because if this play is any indication, Godber is an incredibly talented writer.

“Departures” thoroughly entertains, even as it forces the audience to ponder deep philosophical questions about love, relationships and truth. I’ve don’t think I’ve ever laughed so much about human misery before.

The play is set at an airport departure gate — thus the actual location at an airport. Theater performances outside of the theater, in real-life locations, is a defining component of all Scarlet Cup performances.

Technically, the play’s vignettes occur at many, many different departure gates all around the world. But every one of them looks the same, and the weather outside is always horrible, and the flights are always delayed.

If that sounds like hell, that’s because it’s supposed to. But Godber makes hell hilarious — for the first act, at least.

Leading man Eric Seale plays Jim, a successful businessman who seemingly has everything going for him, except that his job requires him to be a jet-setter and there’s nothing he hates more than flying.

While it is a comedy first, “Departures” is also most definitely a  tragedy, and Jim is Hamlet. Seale, who is artistic managing director of the Central Kentucky Theatre in Springfield, was excellent as a narcissistic maestro in “Living on Love” at Pioneer Playhouse this summer. He is similarly excellent in “Departures,” as he takes the audience with him on a roller coaster of emotions.

Fannie Lemasters performed with Seale in “Living on Love” at Pioneer Playhouse and she continues her solid rapport with Seale in “Departures.” Lemasters’ main role (all of the cast but Seale has multiple roles) is Zoe, a business associate of — and siren to — Jim.

Stephanie Pistello is Claire, Jim’s wife of more than 20 years, who takes him on even more flights around the world when he’s not flying for business. She also portrays a hooker who attempts to seduce in no uncertain terms two of the other characters.

“Departures” is indeed a departure from the normal theater fare you may be used to. It tries to do a lot of different things — a unique venue, a script that breaks all kinds of molds, a ton of jokes, honest and heart-breaking emotion, a thought-provoking and surprising ending. It accomplishes all of it quite impressively.

I wouldn’t recommend bringing children, given the amount of profanity and sexual content. But everyone else who wants to see something truly unique being offered right here in Boyle County should get their tickets to “Departures” before it flies back over to England for good.

This Saturday, a “Reading Round Up” will be held in downtown Danville in the hopes of building reading awareness. The... read more