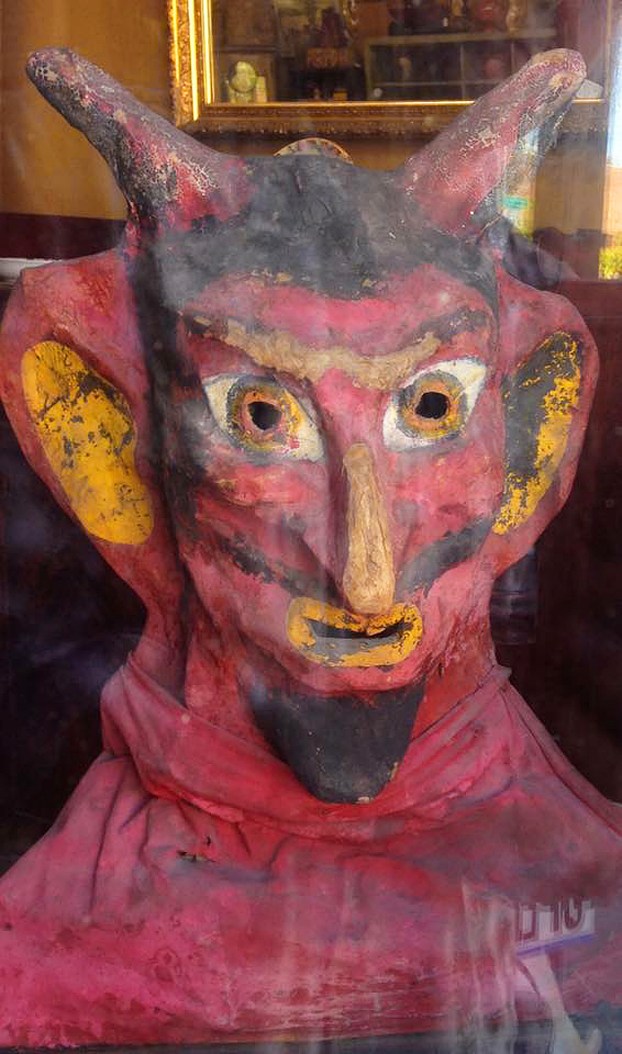 Question: Hi Jerry, What can you tell me about this Devil’s head? I sold him years ago but enjoyed him immensely while I had him in my care. He stood nearly 30 inches high, his eyes lit up and he would bend forward. He was made out of paper mache and stiffened cloth, hand painted with some really great colors. What do you think of him? Any ideas on value? Thanks for taking the time to look this over.

Answer: Yes, we’re continuing our Halloween series. What a knock out of a piece! Readers, remember last week I mentioned “crossover” collectibles? Well, this is another one.

Not only is it Halloween, but this one, crossed over into folk art territory. I mean Halloween collectors would be excited over him. However, a folk art collector will just about swoon over it. Can’t you just see him in a New York-style loft apartment, on a pedestal with a spotlight shining down on him?

Here’s what I think. This is a handmade piece that was made for a carnival or circus. Likely it was in house of horrors or a macabre display of some kind. It would have been shocking! I think with these details, colors and materials that he’ll date to the 1930s or a little earlier. I wish that you knew some more of the history. Made by a “Jack of all trades” at one of these venues, because there were no Lowe’s or Michael’s to shop at. He is very likely to be a one of a kind.

Value is kind of tricky. His size is, shall we say, aggressive. Unless it’s a die hard collector, it might be hard to place in an average home setting. That’s why he’s got so much appeal for the folk art collector.

I think that in a routine world that he could be priced at retail level for $800. However, he’s a wildcard. I could see him at a fine antiques shows, heavy in folk art, priced for $1,200 or more, maybe a lot more. It’s something that won’t appeal to everyone, but the ones that it does appeal to, will be wild over him. Do you miss him? Thanks for sharing it.

By JERRY SAMPSON Personal Effects Question: Jerry, can you tell me about the value of my Halloween poster? It’s by... read more