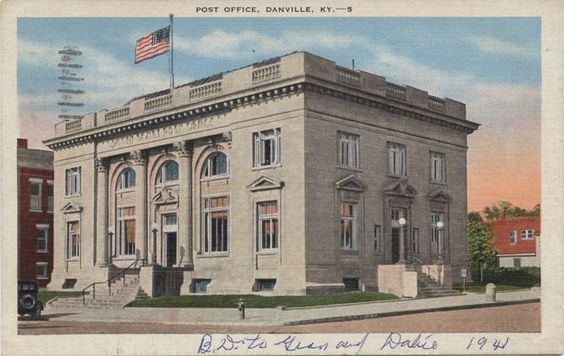 For over 100 years, the stately building on the corner of 4th and Main in downtown Danville has served as a community gathering point and source of great civic pride. Now, for the first, time visitors and natives will have the opportunity to learn more of its history – and hear some of its stories.

The building was occupied in three primary phases: as the town post office from 1911 through 1961, then as a federal building until the mid 1990s, and finally its current use as the Community Arts Center. In 1907, Danville was selected for a federal building project: a post office to serve as a postal delivery hub for the surrounding rural communities. Vintage photographs from the massive construction project mark the first stop on the new building tour. 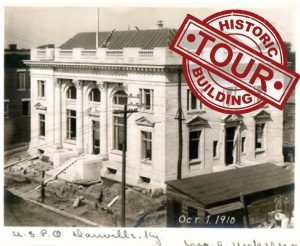 “When visiting the Arts Center for the first time, many people ask what the building was originally used for,” says Executive Director Niki Kinkade. “We wanted to find a way to share some of the rich history of this important building in a way that moved beyond an architectural laundry list.”

The result is a self-guided audio tour that combines narration about the building’s history and architecture with first-person stories from long-time Danville residents. “This building holds such special memories for so many people in our community,” says Kinkade. “We are excited to share just a few of those recollections with our visitors.”

Jim Jacobus, retired president of the Inter-County Energy Cooperative recalls riding his bicycle to the old post office and clambering with his friends into the broad window sills to watch parades go by. Michael Hughes reflects on visiting the then-federal building to enlist in military service during the Vietnam War. Chris Kubale recalls fondly the blind man whose candy stand at the post office created vivid memories for an entire generation of young people in the community, while another long-time resident, Nelson Rhodes, shares the story of a former federal employee with a penchant for curing country hams in the basement. “I had never heard many of these stories before,” says Kinkade. “This project is as much about preserving our community’s shared memories as it is about showcasing the building’s structure.”

In addition to the human-interest stories, participants on the tour will have the opportunity to learn

some of the identifying features of the Beaux Arts architectural style, which had its apex of popularity in the United States from 1890 to 1920.  The Arts Center joins such well-known buildings as the KY Governor’s Mansion, Metropolitan Museum of Art, and Grand Central Terminal in New York City as classic examples of the style.

The tour also chronicles the $1.4 million dollar renovation undertaken by the Community Arts Center when the organization took possession of the building. “We are honored to be the caretakers of this building,” says Kinkade. “The Arts Center is grateful to the City of Danville with entrusting us with the use and care for such an important community asset.”

The development of the Historically Bold Building Tour was supported by the Danville/Boyle County Convention and Visitor’s Bureau and the Boyle Landmark Trust. Jacob Pankey, Chairperson for the Trust, says that they were excited to partner with the Arts Center on this educational opportunity. “As an excellent example of adaptive reuse, The Federal Building located at 401 West Main Street has a rich and diverse history that needs to be shared with our community and its visitors.” Board Member Stephanie Griffin agrees, noting that, “It is a privilege for Boyle Landmark Trust to support the Historically Bold tour. The preservation of just such a building is always our goal.”

Community members who wish to experience the Historically Bold Building Tour may check out an iPad and headphones from the front desk. The free, self-guided tour takes approximately 25 minutes to complete. The Arts Center is open Tuesday through Friday, 11am to 7pm and Saturdays 10am to 5pm.

How to Draw People

Lunch with the Arts: Lee Patrick and Loren Tice

Candidates for magistrate in Boyle County District 2 met at a forum organized by the Boyle County Chamber of Commerce... read more