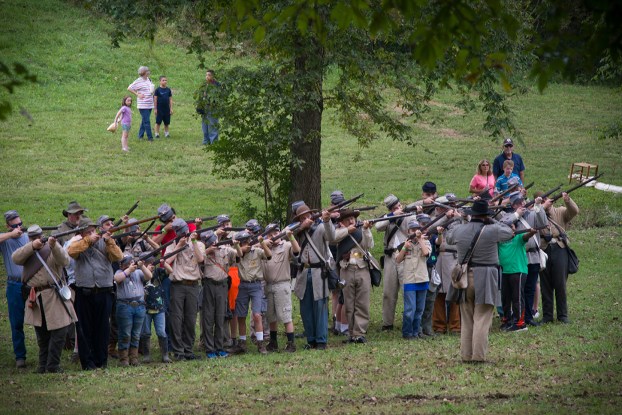 Kids learn to fire in rank while participating int the School of the Soldier, which is a program that simulated the aspects of a soldier’s life.

The 156th anniversary of the Battle of Perryville was remembered in many ways over the weekend. The annual commemoration, held at Perryville Battlefield State Historic Site, featured reenactors and many educational programs designed to help attendees go back in time and understand better what it was like to be a soldier in the Civil War. In downtown Perryville, a parade was the centerpiece of a festive, three-day event that included pageants, food trucks, reenactments in the streets and plenty of history.

Anne Marie Carpenter and Fayma Callahn of Key West, Florida, rest in the shade at the Perryville Battlefield commemoration Saturday.

Jaxson Reardon, 2, of Perryville is held by his father during the Main Street parade on Saturday.

Dignitaries place a wreath at a Confederate monument at Perryville Battlefield during a memorial service.
You Might Like

Planning and Zoning is one person smaller in Danville-Boyle County, now that Administrative Assistant Jennie Hollon has resigned to pursue... read more