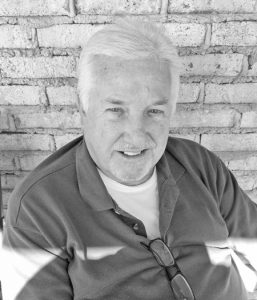 Born June 1, 1941, in Edmondson County, Ky., he is the son of the late Hoyt Herbert and Rosa Nell Morris Tarter. Ray graduated from Brownsville High School and attended Western Kentucky University. He was of the Baptist faith. Ray served in the United States Air Force during the Cuban Missile crisis. He was stationed in Altus, Oklahoma where he met his wife of 55 years. He was the founder and owner of JobMaster Rental. Ray was a very intelligent and talented person. He carved beautiful wood figures, he reupholstered furniture, he built brick patios for every house he owned, and he taught himself to weld. Ray always loved a challenge, he was very involved in youth athletics and was an avid UK fan and there was nothing he couldn’t do without success.

He is survived by his wife, Jackie and two sons, Shane A. (Mary) Tarter of Crestwood and Sean R. Tarter of Danville; two grandsons, Bryce and Braydan Daniels; a sister, Loretta (Harold) Vincent of Louisville; and a brother, Travis (Elaine) Tarter of Corydon, Indiana.

The funeral service will be 11 a.m., Tuesday, October 9, 2018 with burial to follow in the Lambert Cemetery, Edmondson County. Visitation will be after 5 p.m., Monday at Stith Funeral Home, Danville.

In addition to flowers, memorial donations are suggested to the CASA of the Bluegrass, P.O. Box 45, Danville, KY 40423, and every donation will help a child through family court system. The online guestbook is available at www.stithcares.com.