‘Snapped by Seth’ Stomberger is drawn into his creative art form

Not many people can say that they have started their own business at the age of seventeen.

However, one student who works behind a camera can say differently.

Senior Seth Stomberger has a natural born talent for photography. With the help of his creative mind and fun personality, Stomberger is able to create the most stunning images.

Beyond his magic with the camera, Stomberger is just like any other teenager. He enjoys going to the lake, running and participating in clubs at school. In fact, the lake is where Stomberger first discovered his passion for photography. 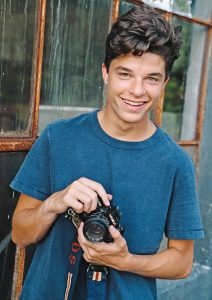 Photo by Becca Tarter
Stomberger has taken his natural born talent for photography and turned it into a personal business.

“When I was is the eighth grade, I really wanted to make super cool videos at the lake, which led me to getting a GoPro (action camera). I ended up using the picture function more than the video. I loved seeing the captured images on the computer after my weekend on the lake”. While the lake triggered his passion for video production, family friend and BCHS graduate Becca Tarter fueled the fire for capturing still pictures.

“Becca is definitely my biggest influence. Seeing her take pictures and get into GSA (Kentucky Governor’s School for the Arts Program) had such a big impact on my photography. She is the nicest, most amazing person ever and has been so supportive. I can not thank her enough for giving me an awesome example”.

As Stomberger began to invest more time in photography, his pictures improved, along with his camera skills. A newfound confidence in his abilities inspired Stomberger to apply for acceptance into the GSA program just as Tarter.

After submitting a challenging application and then being chosen by BCHS for representation, Stomberger was accepted by the GSA state panel. GSA is a prestigious three-week program designed for Kentucky’s finest young artists. The program is designed to group students with similar talents and interests for further study and collaboration.

“A lot of the people I went to GSA with were in the same boat as me in that we were all self- taught and have never really been around a group of people with the same fiery passion for their art. This program really brought us together and now I have such talented, lifelong friends that have helped me grow in photography”.

In addition, Stomberger feels that this program not only gave him life-long friends, but life-long lessons.

“GSA helped me understand why I was taking the photo and what I wanted to show through it. We were really pushed to try and get uncomfortable when taking photos and to find a deeper meaning that connects with us personally. We were taught to be vulnerable in everything we do, and I believe my photos have improved so much because of that.”

After GSA, Stomberger’s photography flourished, and toward the end of the summer, he began taking pictures for other people. Suddenly, a hobby turned into an entrepreneurship. Stomberger manages his business through an Instagram account named @snappedbyseth. Through this form of media people can contact him, see his work, and admire his pictures.

Besides being able to pursue his passion and make a little profit, Stomberger has had to grasp the importance of marketing and managing.

“I have learned so much. I have learned all about the business behind photography and how to market myself. From keeping a consistent Instagram theme to organizing files on my computer, I am learning something new every day”.

Through it all, Stomberger has learned that photography is not as easy as it seems. “Some might think that snapping a picture is pretty simple, however, it is so much more than that. From communicating with your client, setting up locations and editing pictures, it is a difficult process.”

Despite the challenges, Stomberger continues to find creating art exciting.

“Photography is limitless! That is what drew me into taking photos. I had always drawn and painted, but I could never convey my creative intentions through that art form. Photography was different. The way I feel after taking a good photo is indescribable and keeps me coming back for more.”

Photo Seth Stomberger Stomberger captured his friend Ally Anderson wakeboarding at the lake. This environment inspired his passion for photography and gave him the opportunity to practice picture-taking.

Photo by Seth Stomberger Senior Abby Carter had fellow classmate Seth Stomberger photograph her senior pictures. Stomberger used his skills learned from GSA to capture the picture during the golden hour.
You Might Like

By EMILY BARRINGER Danville High School Danville and Boyle are rivals and everyone knows it. They have been rivals for,... read more