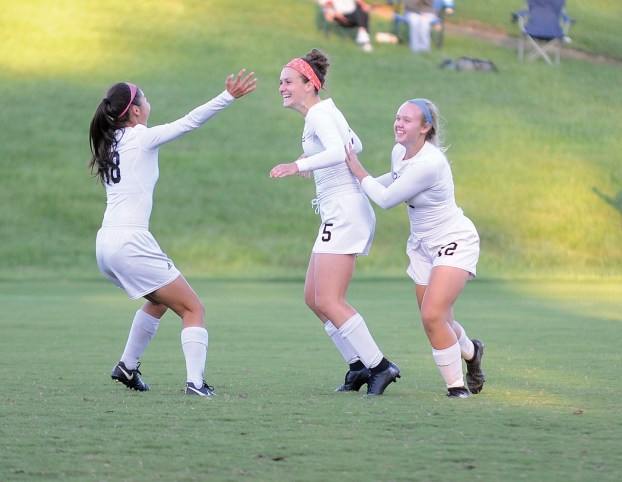 The Rebels claimed their 12th-straight district championship after a physical 1-0 victory at Danville.

Abby Carter scored the only goal of the game with 15 minutes left to play in the first half. Other than her goal, each defense was up to the task.

“We knew it was going to be a great game, the atmosphere we knew would be great,” Boyle’s Nichole Mingey said. “Danville played a great game and gave us a good run. Abby hit a great shot to win it for us.”

Both Carter and Mingey were named to the 45th District All-Tournament team, along with teammates Chelsea Elmore and Lindsey Wren.

It was Mingey who frustrated the Danville players throughout the game. Mingey, playing in a central defensive midfielder role, won headers and broke up the Danville attack while kick-starting the Boyle attack as well.

“We made our switch early in the year with our style of play, we put Nichole where she’s at and told her that she’s our quarterback,” Boyle County head coach Brian Deem said. “I give her full reign, she’s a senior and she plays high-level club soccer. She’s smart enough, understands the game well enough to know when to force a ball, when to make a penetrating pass, when to keep possession. She did a fantastic job tonight. She was a stud out there winning balls in the air. At one point we started hearing Danville girls getting on each other because No. 18 was winning every ball and she didn’t stop.”

Carter said that Mingey’s play was key for the Rebels in their victory.

“That was definitely a big factor in the game tonight, Nichole winning everything in the air,” Carter said. “That’s something we work on in practice and she’s just there. She showed out tonight and it really helped us in midfield, we were able to keep attacking.”

Deem said that he and his coaches switched things up from the last time they played Danville — also a 1-0 Boyle victory — by pushing some of his faster players to the outside.

“The last game we played with them was a tough game. Tonight we mixed things up, gave them a look that maybe they weren’t expecting,” Deem said. “I think it opened some things up for us early in the game that we could exploit and we were able to cash in on it. Abby put her head down and ripped a great shot with her left foot to beat Gaffney. It was a hell of a shot.

“We moved some speed to the wings to see how they would handle it. I think it created some space for us to work in the middle when we got the ball in the middle third. It was something we’ve worked on in practice the last couple of weeks. We could work the middle or the outside, depending on our personnel. It’s a way for us to diversify our attack a little bit.”

Mingey said that speed on the outside helped her operate in the middle.

“Having speed on the outside opened it up for us in the middle because they were able to take people on one on one. It was nice having them there,” she said.

Danville head coach JD Smith knew it’d be a battle against Boyle and said that he loved the way his players responded after falling behind in the first half.

“That was a tough game, physically it was a tough game for both teams,” Smith said. “It just didn’t happen for us. There were a couple things I’d like to see us do better, but for the most part, I was happy with how we played. At halftime, we tried to put them under pressure in the second half. And I felt like we upped our intensity a bit and tried to put them under pressure as best we could.

“I told the girls after the game, I was disappointed with the result. As competitors, we’re disappointed with a loss. But I wasn’t disappointed with how we played or with the effort. It would’ve been real easy for them to back off or to, for lack of a better word, give up, after the first goal. But they refused to, they kept playing and kept pushing. I don’t think any of them really felt they were done until the final whistle. That’s what you want and that’s all you can ask for. I’m very proud of the girls and how they fought, now it’s time to focus on region.”

The focus is on region, but the Rebels will celebrate their 12th district title in a row. Carter and Mingey, both seniors, were five years old when the streak began.

Mingey agreed, saying they play for the alumni who have helped continue the streak.

“It’s not just about us, it’s about the people who have worn the jersey before,” she said. “Specifically, Elizabeth Lyons has always texted us good luck, she’s always consistent in keeping up with us. That reminds us that it’s not just about us, it’s for the name on our chest. It’s for people who have given their time and effort to make this program great.”

The Rebels will look to return to the state tournament with a region title — their last coming in 2015.

“Regions is always a fun time, we’ll take it one game at a time, practice hard each day for each game,” Mingey said. “We’ll have to play like it’s our last because it can be our last. We’ve got to give 100 percent for an entire 80 minutes.”