On Sept. 28, Dr. Anthony “Tony” Haigh, accompanied by Liz Orndorff, came to Danville Rotary to talk about the interplay between the founding of Scarlet Cup Theater and English playwright John Godber’s approach to theater.

Haigh has been acting and directing on both sides of the Atlantic for more than 50 years. After 26 years, he retired as professor of dramatic arts at Centre College in 2017. In late 2014, Orndorff with Haigh and others founded the Scarlet Cup Theater. The name comes from a mushroom that displays its brilliant scarlet cup each fall. The founders were interested in producing fresh and unusual plays in venues that related to the play’s setting.  The theater’s mission is to offer occasional and unexpected theater in surprising venues that challenge audiences with thought-provoking performances.

The core ideas behind the Scarlet Cup Theater mirror those of the Hull Truck Theatre, which is based in Hull, England. Hull Truck began as a theatre without a building. They originally used the village of Hull as a base from which to tour in their truck, to the places where the audiences could be found — hence the name. Eventually they gained a permanent theatrical venue, but kept the truck tour concept going. With one cast in house and two on the road, they played in theaters all over England.  In 1983, John Godber, the author of Scarlet Cup’s current production, became Hull Truck’s artistic director and resident playwright. 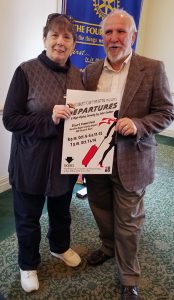 All of Godber’s plays reflect his life experiences in some way. He has brought plays about rugby, judo and skiing, set in gyms, nightclubs and muddy fields to the tiny theater where Hull Truck was based, as well as to audiences all over the country. This connection to his own real-life experience and, by extension, to those of his audiences, resonated with the public and has made Godber one of the most produced playwrights in England.

“Hopefully the airport will provide takeoffs and landings to enhance the authenticity of the setting.”  The space can accommodate 45-50 people, so buy your tickets early.

“Liz and I hope to see all of you at the Stuart Powell Airport Departure Lounge in October.”

Haigh also talked about the impact the arts can have on a community and the importance of all sectors — business, the arts, and education — to be working together to create a positive cultural environment for the benefit of the whole community. Hull, as a port city on the east coast of England was devastated during World War Two and Hull Truck, with its national reputation for theatre excellence, was one element in the slow recovery of the city. In 2017, Hull was named as the UK City of Culture. The opening event of the year-long celebration was attended by more than 25,000 visitors.  By the end of the first week it was reported that 342,000 people (out of a population of 250,700) had participated in events. By the end of the year, more than 5 million people had been attracted to the city, resulting in an investment of over $350 million and the creation of 800 new jobs. Danville (with a population less than a tenth the size of Hull) is a city known for its artistic talent and theatrical output.  We have a long way to go to achieve the success that Hull has had, but as a means of developing a sense of community, the arts have a vital role to play.