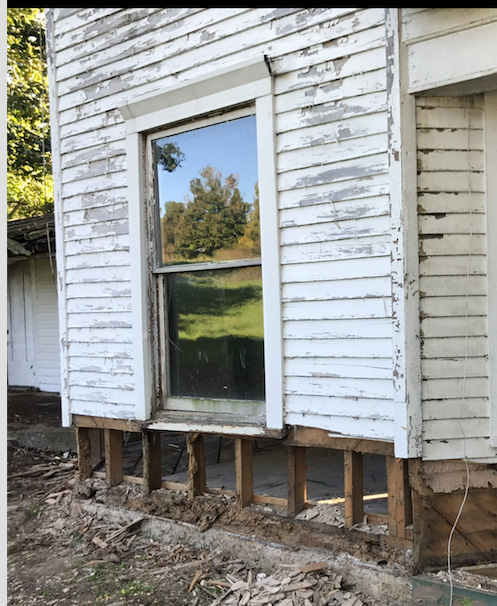 (Contributed photo) Kelly Gray says this is a bay window on the Bond house in Perryville, where the seal was destroyed by termites.

Perryville residents Kelly and Adam Gray have been sued by the Kentucky Heritage Council over alleged changes they made to a historic property. The couple say they only improved the property and are “baffled” by the suit. 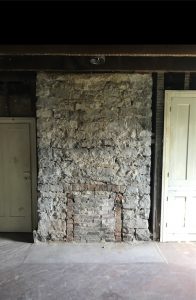 (Photo contributed)
The limestone fireplace in the Bond House in Perryville is shown, before the Grays replaced it with new materials they say matches the home.

The suit claims the historic structure, referred to as the Bond House, has been altered in violation of a Preservation and Conservation Easement, which allowed the Grays to benefit through reduced property tax payments.

“KHC came to town in summer of 2017 to do an inspection on properties that Main Street Perryville owns and has easements on, and they saw the demo work we had started to protect the property from further deterioration,” Adam Gray said.

He said they are restoring two properties in Perryville “that have been condemned since late 2013.”

“We wanted to make sure everyone knows the truth about this situation,” Kelly Gray wrote in an email. “When we purchased the property, we had every intention of doing what was necessary to prevent what was a legally condemned property from falling in on itself.”

When further questions were asked about the council’s policies on how easements are handled, as far as the communication with buyers, KHC Public Information Officer Diane Comer replied with a link to file an open records request; she has not responded to further questions about overall policy.

According to the suit, KHC claims when the Grays bought the building, the deed described it as subject to all easements and restrictions, and that the property must be “maintained forever substantially in the condition it was in” at time of purchase. 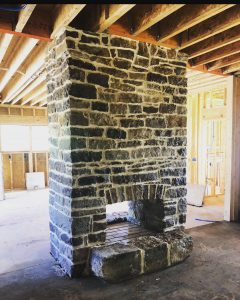 (Contributed photo)
Kelly Gray says this shows the restored fireplace, repaired with new mortar to match the original has been and a new damper has been added to make it a working, wood burning fireplace again.

The suit describes several changes the Grays made to historic attributes of the home, including wood windows, brick nogging, interior and exterior doors, interior wood trim and interior plaster walls and ceilings.

The suit also states the defendants caused or allowed a signature from a soldier at The Battle of Perryville that was located on a plaster wall to be removed, as well as historic stair elements from the property.

It goes on to list 44 individual similar items removed, such as historic columns, porch elements, stairs, hardware, hardwood flooring, fireplace, interior openings and historic additions. It says the defendants have caused or allowed construction of exterior features that are not original to the property. It argues all of the changes are in violation of the easement and performed without consent of the plaintiffs; and that the changes are in violation of the Secretary of the Interior’s standards and guidelines.

“The actions of the defendants represent an intentional and substantial breach of the easement, having forever destroyed much of the historic character of the property the easement was supposed to protect,” the suit states.

“This is simply not true,” Kelly Gray said. “In fact, KHC never attempted to contact us about the easement once we purchased the property until attempts at saving it had begun.”

Kelly Gray said the Bond House had been neglected for a number of decades, adding that rodents, termites and birds inhabited it, and mold and mildew had “completely saturated the plaster and lathe in the walls. The floor joists were rotten/nonexistent, windows and siding were beyond repair, roof had several holes causing extensive water damage to the structure of the house, etc., which forced us to save what we could and mitigate the damage caused by neglect.” 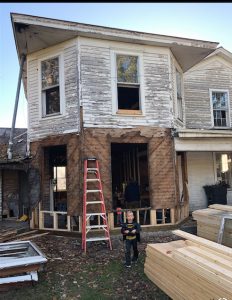 (Contributed photo)
Kelly Gray says this shows the foundation restoration in progress. “We added a new sill plate and new framing to replace termite destroyed wood. It had fallen 6 inches due to termite/water damage and neglect.”

The lawsuit argues the Grays should not be allowed to benefit from reduced property tax payments on the property.

“How did we benefit from the easement?” Kelly Gray asked. She said the reduced market value was because of the state of the property, which is why it was listed multiple times and “no one showed any interest” because it was known how much money it would take to “restore it.”

“We could have saved ourselves an immense amount of money if we had just built a brand new house from the ground up, but because we have a passion for historic preservation and for Perryville, we thought it was more important to save a piece of history despite the extra costs that we knew would come along with that,” Kelly Gray said. She said she and Adam Gray “value historic preservation … and want our children and grandchildren to have the privilege of seeing these historic structures standing 100 years from now. However, in the end we are really on the same team, which continues to baffle me. Why is an organization suing us for doing exactly what they fight for each and every day?”

Kelly Gray said they’ve added two properties to the tax roll in Perryville, and that funds from the purchase of the Bond House were used to restore the recently opened Johnson-Britton House on Merchants Row. “In total, three historic properties have been saved because of our purchase … which benefits the citizens of Perryville.”

The suit requests the defendants be required to pay the Boyle County Sheriff’s Office the difference in property taxes between the assessed value of the property with the easement in place, and any increased value that may result from the reduced restrictions caused by the destruction of the protected elements.

Who has been judge-executive in Boyle County when — and why — has become a topic of debate this election... read more