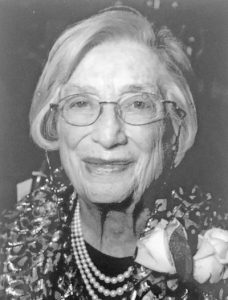 Joan Dupre Schweinfurth, 92, of Danville, peacefully passed away on July 28 with her sons by her side. Joan was the only child born to Carl Francis and Hattie Mae (Wiegleb) Dupre on March 9, 1926 in Louisville.

She was preceded in death by her husband Jan Robert Schweinfurth in 1999. They met while she was working at Bowman Field in Louisville, and married on May 10, 1947. Joan was a pioneer being one of the first women in Kentucky to major in Chemistry at the University of Louisville and was later employed as a chemist at Allied Chemical. Joan earned a pilot’s license in the 1940’s before getting a driver’s license and ran two airports in Glasgow and Carrollton, Ky. with her husband. They moved to Danville, in 1955. She taught sixth grade, later teaching fifth and sixth grade math and science at Perryville Elementary School from 1964 to 1988. She went on to earn three additional degrees including a Masters and a Specialist in Education from Eastern Kentucky University, and she completed Doctoral work at the University of Kentucky. Joan served as treasurer of the Central Kentucky Education Association and as a delegate to the National Education Association for five years.

A private service is planned at Bellevue Cemetery.