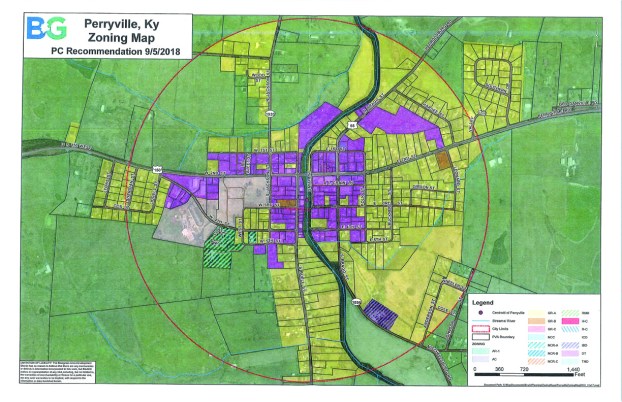 Danville-Boyle County Planning and Zoning’s recommendation for a comprehensive zone change in Perryville was unanimously approved by the city council Thursday evening. The approval was a first reading of an ordinance; a second reading is needed for an ordinance to become law.

The topic of the rezoning has been a contentious one during past meetings due to a proposed site for a crematorium in a lot next to Walden Funeral Home, currently zoned residential.

The funeral home is allowed to operate as a business in a residential zone because it has been in operation for almost 93 years and predates the zoning. Because the business is grandfathered in, owner David Walden could build the crematorium onto his existing structure if he desired. The comprehensive zone change includes changing the zoning for the proposed crematorium so a free-standing structure could be built.

Resident Steven Walker, who opposes having a crematorium in Perryville, has said he has obtained legal counsel from a firm in Louisville to contest the crematorium plan, and said at past meetings he doubts the “grandfathering” of Walden’s establishment is legal.

The ordinance rezones approximately 137 parcels of land over more than 193 acres.

The committee first looked at the future land use map for the town. At that time, he said several discrepancies and problems were identified on the zoning map.

“We saw that people’s properties were split-zoned … the school was zoned multi-family, the apartments next door were zoned commercial, property next to that had three zonings … We figured out that we needed to do a housekeeping exercise for Perryvile’s zoning layer,” Hunter said, which he added could be a very daunting task.

Hunter said the committee sat down with the old zoning map and started labeling things with a marker that should probably be rezoned. There were four different versions before a proposed rezoning map was taken to the P&Z Commission for consideration. In order to get approval from all the property owners, the committee decided Hunter would handle contacting all of the out-of-town folks, and Webb and Goode would handle getting consent signatures in town.

Hunter said although most of the focus had been the rezoning of downtown properties — due to the crematorium debate — they actually took more real estate back to agriculture in raw acres than anything else.

“We had a lot of farms that were zoned residential,” he said.

Some folks wanted out and didn’t want to participate, he said — about a dozen. But five of those residents came back later and asked to be put back into the new zone change, and the map was amended to show those.

“Some wanted to stay agriculture. Seems odd, but there’s a couple of subdivisions with residential lots — but if they wanted it left agriculture, that’s what we did.”

Hunter said all of the decisions made in the rezoning project were “100-percent in compliance with this the future land map and comprehensive plan.”

Because of rumors of “collusion” between the Junction City Council and P&Z — some have suggested the rezoning project was concocted in order to get the lot next to Walden’s zoned commercial and enable him to build the crematorium — Hunter also presented a detailed timeline of the project. The timeline showed the first conversation about the possible rezoning project being held on Dec. 7, with meetings following in January of this year. The city’s revamped future land use map was adopted after a P&Z public hearing on April 4.

After all was said and done, about 17 people opted out of the rezoning out of a total of 154. “Now it’s up to the city to vote it in or out; it won’t hurt our feelings, regardless,” Hunter said. “It was a great project in the community; we didn’t hear many negative comments and everyone seemed appreciative.”

After City Attorney Winfield Frankel read the ordinance in full, Webb made a motion to accept it, and council member Brian Caldwell seconded it. It was passed unanimously.

Mayor Sleet thanked Hunter for all of his work on the rezoning.

After the meeting, Caldwell said he voted in favor of the rezoning because “I feel like the properties — that were either split-zoned or improperly zoned — needed to be addressed and properly zoned, in order to more suitably comply with the future land use map.”

Webb said, “It really focuses on us having a more uniformed zoning, and curating our downtown. By creating that DT zoning (downtown), it now allows for us to have residential or businesses, or both. It will give more availability for businesses to move downtown, as well as in-home businesses. It’s a good thing.”

A small group of residents were present for the reading, but no “hear the public” was included on the special called meeting’s agenda.