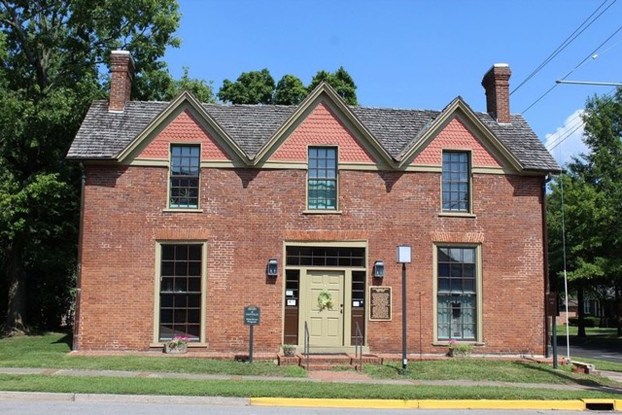 Editor’s note: information for this article was taken from an article written by Eugene H. Conner and published in the Journal of the History of Medicine and Allied Sciences in 1977, and Wikipedia.

Dr. Alban Gilpin (Smith) Goldsmith was a pioneer surgeon and teacher who made strides in the medical field in the early 1800s.

He lived in Danville for five years when he was a pupil and assistant to Dr. Ephraim McDowell and may have assisted McDowell to perform his first ovariotomy on Jane Todd Crawford, on Christmas Day in 1809.

The Goldsmith House at the corner of South Second and Martin Luther King Boulevard is where Dr. Goldsmith lived while he was in Danville.

Goldsmith changed his surname from Smith to Goldsmith after he moved to Danville, where there were other Smith doctors.

However, the name change didn’t become official until 1839 after he petitioned the legislature of New York to change his name from Smith to Goldsmith.

His date and birthplace are not known. Some information shows he was a Danville native and others say he was born in Delaware. He was a son of Samuel Smith and Lydia Gilpin.

Goldsmith left Kentucky and in 1794. He and Talaferro Middleton of Virginia were married. He practiced medicine in Port Tobacco, Maryland, where his son, Middleton, was born in 1818.

In search for more education, Goldsmith left the practice in Maryland and headed to Philadelphia to attend private medical lectures of Joseph Parrish to learn more about chemistry, anatomy and clinical medicine.

Goldsmith was the attending surgeon from 1806 to 1822 at Philadelphia Alms House and gave clinical lectures in surgery.

He returned to Danville to practice in the early 1800s.

On May 24, 1823, Goldsmith successfully performed an ovariotomy on a 20-year old black woman suffering from a partially cystic tumor of the ovary.

He was the third surgeon in American to perform that type of procedure. After McDowell, Nathan Smith was the second in 1821.

The first academic appointment held by Goldsmith was from 1823 to 1832 as professor of chemistry at Centre College.

He apparently intended to return to Danville permanently. In 1825, he purchased a house from Col. Joseph McDowell at the southwest corner of Second Street.

Dr. Goldsmith performed an operation, lumbar laminectomy, in the presence of his colleague Dr. Henry Miller on December 19, 1825. Miller was an anatomist-physician in Danville.

This was the earliest recorded case of laminectomy for fracture of the spine.

The patient had a paralysis of the lower extremities that had developed two years after an injury.

Goldsmith had sought relief for the distressing symptoms. After the removal of the vertebrae, it was stated there was some recovery of function.

Goldsmith also was a skilled lithotomist (someone who removes stones from organs such as kidney and bladder) and performed 50 lithotomies while in Kentucky. In 1829, he went to Paris to study the technique of lithotrity as developed and practiced by Jean Civiale.

When Goldsmith returned to the United States, he stopped in Philadelphia, where he met Daniel Drake, senior editor of the “Western Journal of Medical and Physical Sciences,” and was interviewed about the new technique of Civiale, which was published in the journal.

After Smith returned to Danville, he performed the first lithotrity in the West. It may have been the first such operation in the United States.

He moved to Louisville between 1830 and 1831, and was one of the attending physicians at the Louisville Marine Hospital.

He became one of the movers in an effort to establish a medical school. In February 1833, he was successful in getting a charter for the Louisville Medical Institute which was named for him and eight other physicians as incorporators. Due to problems with getting a faculty, the first session was not until 1837-38.

In 1833, he accepted an appointment as professor of surgery in the Medical College of Ohio in Cincinnati, and stayed until 1837 when the college reorganized.

He left Cincinnati in 1837 to accept the chair of surgery at the College of Physician and Surgeons of the University of the State of New York. He resigned two years later and devoted his attention to genitourinary surgery until his death.

Goldsmith and his wife had three sons. His first son, Middleton, was a surgeon in the Union Army during the Civil War and primarily stayed in the Louisville area.

Middleton was born in Maryland in 1818 and graduated from the New York College of Physicians and Surgeons in 1840 He succeeded his father as chairman of Surgery at Kentucky School of Medicine and became dean of the faculty. He developed a treatment for gangrene.

From our files, October 6

100 YEARS AGO — 1918 Public schools and places of amusement in Danville and Boyle County were ordered closed yesterday... read more